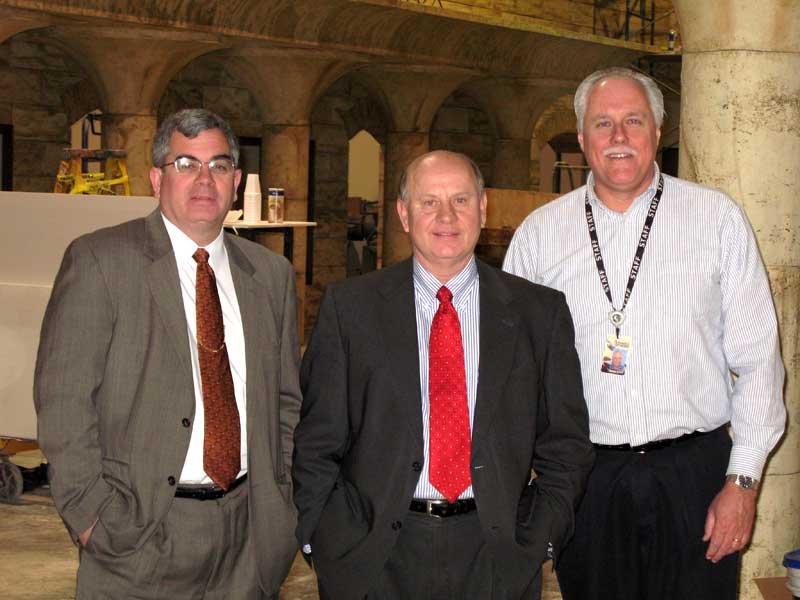 Bearing Precious Seed (BPS) is the name of a publishing ministry started in 1973 at First Baptist Church in Milford, Ohio. AiG staff were pleased to hear from the General Director of this ministry, Dr. Stephen Zeinner (pictured: Pastor Bill Dutry of First Baptist Milford, Rev. Steve Zeinner of BPS, and AiGs Mark Looy, standing in the Creation Museums future plaza room), in a recent Thursday staff meeting. Bearing Precious Seed believes there is a doctrinal need for local churches to be involved in the printing and distribution of the precious Word of God. Just as the New Testament churches read and copied Scripture. The name for the ministry comes from Psalm 126:6, He that goeth forth and weepeth, bearing precious seed, shall doubtless come again with rejoicing, bringing his sheave with him.

This ministry started in the churchs basement closet and printed 12,000 Scripture portions in its first year of operation using an old press, hand-operated cutter, 7-Up bottles to roll the glue flat (!) and a few hundred dollars. The ministry now has a large production and warehouse space, automated printers, cutters, and binders and printed approximately 6 million Scripture portions including whole Bibles in 2003. Scripture portions (such as John and Romans and the NT) along with whole Bibles are printed in 42 languages. These Bibles are shipped to local missionaries and Christian nationals that distribute them free of charge. While 42 languages might seem like a lot, according to BPS, We are told that of our worlds 6809 known languages, only 405 have the complete Bible translated and printed. Another 1034 have only the New Testament, leaving nearly 5370 languages with less than the New Testament in written form. We here at AiG recognize the need for Bible-based materials to be translated into other languages. Dr. David Crandall, Director of AiG Worldwide, is working with people from all over the world to have AiG materials translated with the number now surpassing 70 languages!

I found this quote from their brochure especially relevant to what we are trying to accomplish here at AiG.

Those who touted religion as a crutch, placing science on a loftier scale, now lie mute in cold graves while the Bible still speaks, guiding men by its principles, wooing them by its power and even proving science by its very words.

And that is what its really all about--the authority of the Word of God should serve as our foundation and the basis for our worldview. Mans theories will all pass away but Gods Word remains the same yesterday, today, and forever!

I would encourage you to support Bearing Precious Seed with your prayers and finances. According to BPS, an average roll of paper costs $1,000 but look at all it produces: 11,000 John and Romans, 1,800 New Testaments, and 400 whole Bibles. Even more than what it produces physically, think of all the fruit it produces spiritually! For more information check out their website at www.bpsmilford.org