Evolution Exposed pours out of AiG

AiGs special outreach to public schools is gaining momentumvery quickly. The book has sold an amazing 23,000 copies within just three weeks of release.

The tremendous response is due to deep discounts offered to people interested in making the books available to public school students across the country. In his book titled Evolution Exposed, author Roger Patterson provides an alternative to students, who rarely hear anything outside of Darwinian theory.

Evolution Exposed is a survival guide for students in biology class, said Answers in Genesis Chief Communications Officer Mark Looy. It is structured to help teens learn that theres a chronic bias in favor of belief in evolution and millions of years of history, especially as they permeate biology textbooks in U.S. schools. To launch this first-ever nationwide effort, AiGfor a limited timeoffers the new 301-page book for only $3.99 each when purchased in case quantities (30 per case). The normal retail price per copy for this reference text is $15.99.

Author Roger Patterson is himself a former evolutionist. He taught biology and other sciences for eight years in Wyomings public school system and assisted the state's department of education in developing assessments and standards for public schools. In writing Evolution Exposed, Patterson read the three most popular high school biology textbooks from cover to cover (published by Holt, Glencoe, and Prentice Hall) and then assembled the arguments in favor of evolutionand refuted them one by one. Because virtually every public school student will take a biology class in 9th or 10th grade, its likely they will use one of these texts. In conjunction with the release of this new book, AiG is sponsoring a one-of-a-kind contest. Using Evolution Exposed and other resources, students are challenged to write a research paper on the problems with evolution. The grand prize is a $50,000 scholarship provided by, and to, Liberty University in Virginia. That is a bigger Grand Prize scholarship than what is awarded at the 2006 Miss America pageant. 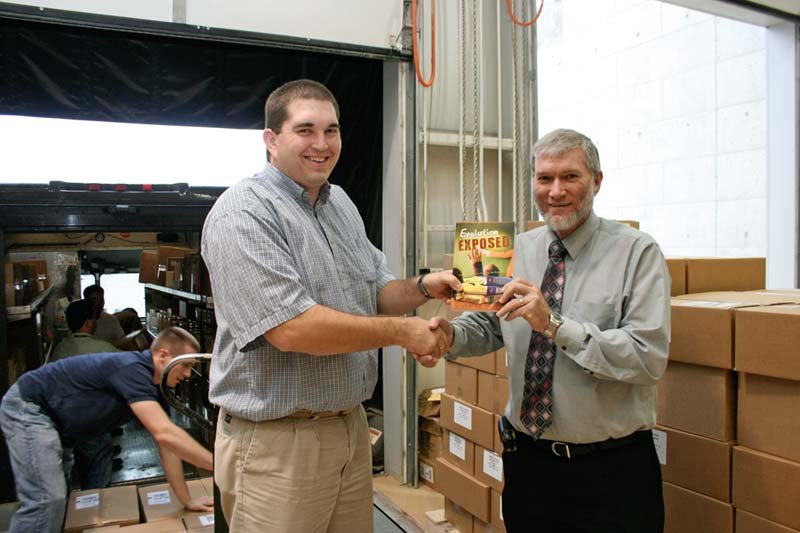 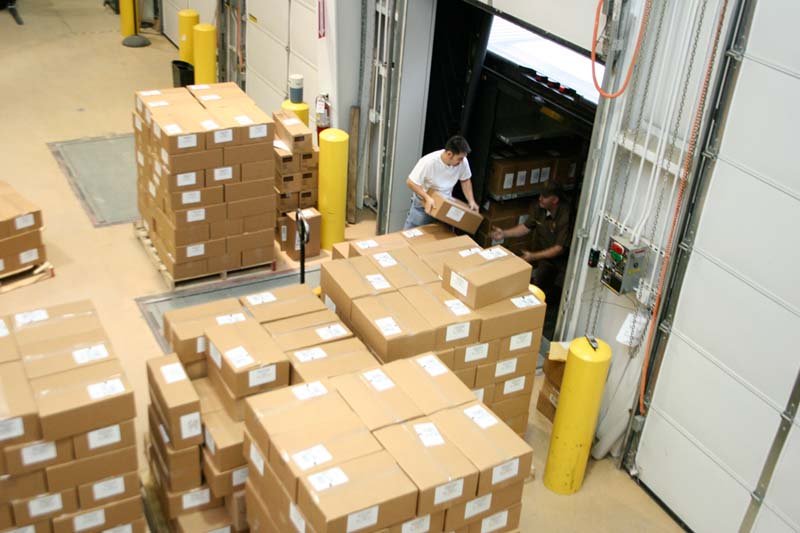 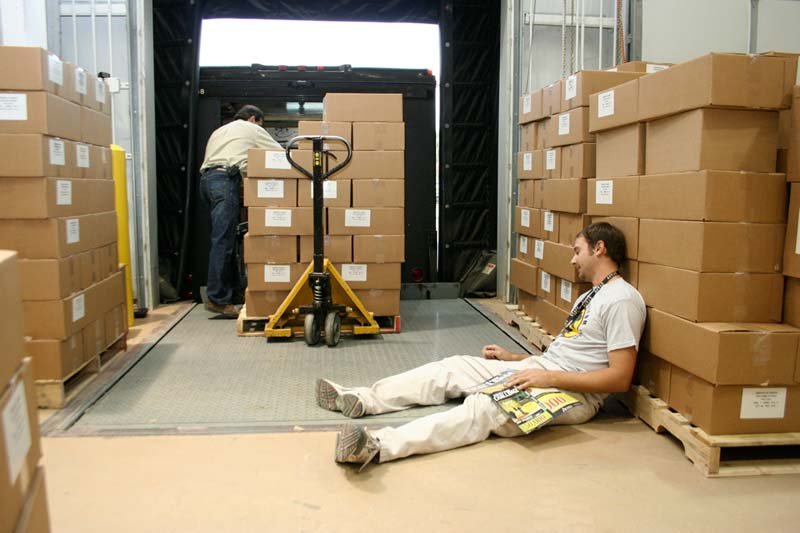 I have enclosed a photograph of Roger and me standing in front of the UPS truck at AiGs loading dock as staff loaded pallets of cases of the book that have been purchased for distribution. The other two photographs show staff loading (or lying exhausted after loading) the case lots that went out today via UPS.

Many of you will remember my blog item a few months ago when I was speaking in Leicester England, and the Secular Society demonstrated outside the lecture hall, handing out flyers to people who attended my lecture.

This same secular society has a press release about a lecture on evolution they are sponsoring at the same university where the AiG meeting was held. Their speaker is Professor Jones from London Universityhe is one of three on a debate with me on BBC television a couple of years ago. Ill never forget Professor Jones. I asked him to give the best evidence he had for evolutionand he answered saying something about a species of salmon in America that produced three different species of salmon. And I answered and said, but they are still salmon.

One of the world's leading evolutionary biologists is to give a lecture at the University of Leicester entitled: Why Creationism is Wrong and Evolution is Right.

"Many biologists are worried by a recent and unexpected return of an argument based on belief, by the certainty, untestable and unsupported by evidence, that life did not evolve but appeared by supernatural means. Worldwide, more people believe in creationism than in evolution. Why do no biologists agree? Steve Jones will talk about what evolution is, about new evidence that men and chimps are close relatives and about how we are, nevertheless, unique and why creationism does more harm to religion than it does to science."

Professor Jones, University College, London, is one of the world's leading evolutionary biologists