Thoughts on the Total Lunar Eclipse of April 4

There was a total lunar eclipse on the morning of April 4, 2015. This was the third eclipse of the series of four (a tetrad) that some have claimed is a sign of the end of the world. I have previously written (here and here) and blogged (here and here) about this tetrad of lunar eclipses. While the beginning of the eclipse was visible from much of the United States, the moon set (at sunrise) before the eclipse ended for much of the country. For instance, in the Cincinnati area the moon set a half hour before totality.

My Recent Attempts at Astrophotography

Recently at the Creation Museum, we purchased a camera adapter for the Questar telescope. Astrophotography is something new to me, and in the past two weeks I've learned quite a bit about it. In a future blog, I plan to share some of my photos. This seemed like a good time to document the April 4 eclipse while at the same time honing my astrophotography skills, so I drove to the Creation Museum early that morning and set up the telescope with my camera.

The moon was already very low in the sky when it entered the earth’s shadow (the umbra). Light from objects so low in the sky passes through a tremendous amount of the earth’s atmosphere. Air molecules scatter light, causing objects low in the sky to be dimmed and reddened. This is why the rising or setting sun appears much fainter and redder than it does when it is high in the sky. A similar thing happened to the moon, so I had to greatly increase my exposure times over what they would be if the moon were high in the sky. At the same time, turbulence in all that air caused the images to shimmer. The fact that I was looking over the roof of the Creation Museum made things even worse—the heat rising off of buildings notoriously produces even more turbulence. Given the shimmering images and relatively long exposure times required, all of the photographs that I took through the telescope were a little bit blurry.

Soon the moon began to disappear behind the roof, so I walked across the parking lot to view the eclipse off to the side of the building. I took the camera off the telescope and tried taking a few photographs with just the normal camera lens. This is one of the photographs that I took. The building is to the left of the moon and the headlights of traffic on I-275 are to the right. Notice the “bite” that the earth’s umbra took out of the moon. An hour before, the moon was full. 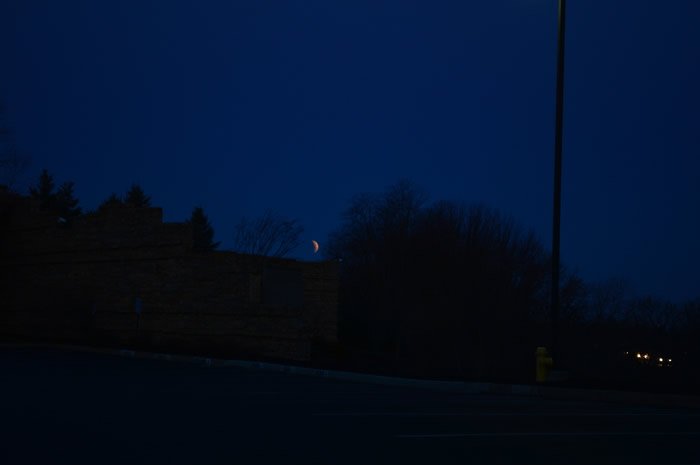 Things to Notice in This Photo

This photograph with its tiny image of the moon presents several lessons. First, the earth’s umbra is much larger than the moon, so this is why the moon appears to have a bite out of it. Also notice that the bite is round. The earth’s umbra always is round, because the earth is a sphere. A sphere is the only shape that consistently casts a circular shadow, regardless of its orientation. As early as 500 BC, people were using this argument to show that the earth was spherical, and not flat. Nearly everyone believes the myth that people thought the earth was flat until the time of Christopher Columbus five centuries ago. This myth was unleashed on the world in the nineteenth century to intimidate the church into accepting Darwinism (a very successful tactic, as it turned out). Perhaps I’ll write more about this another time.

Second, the lit portion of the moon on this photograph appears red, though hardly blood red. Many people think that Jesus was crucified on the night of April 3, AD 33. One reason for this belief is that the moon rose eclipsed over Jerusalem that night. Supposedly, Peter’s statement made on Pentecost where he quoted about the moon turning to blood (Acts 2:20) was a reference to this eclipse just seven weeks earlier. However, as I’ve already pointed out, the moon was not totally eclipsed that night, so the moon that night did not appear red, at least not from the eclipse. Some people dispute my statements that a partially eclipsed moon does not appear red, and they point to photographs such as mine where a partially eclipsed moon does appear red. Where does the red hue in this photograph come from? The reddening effect of the earth’s atmosphere is responsible. The rising or setting moon appears redder than normal, similarly to how a rising or setting sun appears red. That is, the moon on the morning of April 4 would have appeared red, even if there were no eclipse. This happens nearly every night that the moon is out, so there is nothing apocalyptic here. If the moon appeared red when it rose the night that Jesus was crucified, a lunar eclipse hardly was necessary

On this subject, I recently saw John Hagee’s documentary, Four Blood Moons. The movie was a bit different from what I expected. It didn’t discuss the four lunar eclipses of the title that much. It seemed that the producers of the film more or less assumed that those watching already knew about those. Instead, the movie spent much time with clips from interviews with various experts and dramatizing some supposed historical events. I say supposed, because I doubt the accuracy of many of them. For instance, there were accounts of miracles and angelic intervention during the Arab-Israeli Six Day War in 1967. Much of the audience in the theater seemed to enjoy these immensely, but I was skeptical. Another fanciful event was Christopher Columbus and his passengers observing a total lunar eclipse the second night of his second voyage to the new world in 1493. I looked up the dates of his second voyage and confirmed that there was a total lunar eclipse the second night of that voyage. However, the eclipse occurred during the day in Spain and points west. The eclipse had ended by the time that the moon rose for Columbus that evening, so no one on the voyage could have seen the eclipse. If the movie is completely wrong about that one thing, it does not inspire confidence about the rest of the content.

The film was followed by a half-hour panel discussion. One of the four panelists was the astronomer Hugh Ross, who also was one of the experts interviewed for the film. During the panel discussion, Hugh Ross pointed out some of the problems with the blood moon thesis that I’ve been saying. Hugh Ross is wrong about many things dealing with creation, and I frequently have criticized his work. Therefore, it was refreshing to see Hugh Ross and me agreeing about something for a change.

Back to the Eclipse

While I could not see the entire April 4 eclipse, people in the western US and around the Pacific did. According to accounts collected by Sky and Telescope, there is some dispute about the aspects of this particular eclipse. Prior to the eclipse, it was described as a minimal total eclipse. The maximum duration of a total lunar eclipse is an hour and forty minutes (one that I saw in 1982 came within a minute of the maximum possible length). The moon was expected to be barely immersed in the earth’s umbra for about five minutes. However, many people who saw the entire eclipse said that they had the impression that the eclipse was not total. That is, there was a light sliver across the top of the moon that made it appear that the eclipse was a very deep partial eclipse. What happened? The earth’s atmosphere refracts sunlight into the umbra, and the amount of this bending of light changes. The result is that the earth’s umbra can vary in size, though no one knows exactly why. Apparently, this time the umbra was a bit smaller than normal, allowing more light from the sun to reach the moon. Being so bright, the moon did not appear particularly red to most people. It would have taken some imagination to call this a “blood moon.”

This whole business of the so-called “blood moons” began with Mark Biltz. Biltz recently published his book on the subject. Having read the book, I’ve posted a critique of it. The final eclipse of the tetrad will be the evening of September 27, 2015, less than six months away. I expect that much of this nonsense will disappear after that.

Previous Article The Evolving History of the Earth’s Oceans Next Article Summer 2015: A Very Busy Time