I had hoped that the eclipsed moon would be red. Deep red. A Cheerwine red (a brand of soda). Alas, it wasn’t to be. But I was in a celebratory mood, so I broke out some Cheerwine to share with those watching the recent lunar eclipse with me. (If you don’t know about my obsession with Cheerwine, please see an earlier blog where I mentioned it.)

About 30 people showed up at Johnson Observatory at the Creation Museum on the morning of Wednesday, October 8, to watch the total lunar eclipse. The partial phase of the eclipse started at 5:15 AM, but before 5:00 AM I easily could see shading from the penumbra. The penumbra is the portion of the Earth’s shadow where the sun’s light is not totally blocked. I normally have difficulty seeing penumbral shading, but it was easy this time. The intensity of the penumbral shading suggested that this would be a dark eclipse.

Once the total phase began more than an hour later, we had difficulty judging exactly what color we were seeing. I think that it was the distinct lack of color that made this difficult. Lack of color is common in dark eclipses. I may have seen one or two total lunar eclipses that appeared darker than this one. From visual inspections without optical aid and by looking through a pair of binoculars and two telescopes at low magnification, I’d say that the dominant color was gray with a tint of red/orange. Exactly what shade of red/orange was it? It definitely wasn’t pumpkin or peach, colors that I’ve seen in previous eclipses. Many people witnessing the eclipse here thought that it was close to copper or rust color. At any rate, no one here thought that the color was distinctly red or that the moon’s appearance in any manner resembled blood.

This eclipse was the second of a much discussed tetrad of four total lunar eclipses this year and next. We missed watching the first one of the tetrad on April 15 because of poor weather that night. The next one on April 4, 2015, will not be visible here at the Creation Museum, but the last one on September 28, 2015, will be visible from the Creation Museum right after sunset. We almost certainly will plan for public viewing here at the museum that evening.

As many of you are aware, this so-called tetrad of four total lunar eclipses has garnered a tremendous amount of attention among some Christians because of the apocalyptic implications that some people see in them. And many of you probably also are aware that I have been critical of this teaching. In response to the lunar eclipse last April, Answers in Genesis posted a second article on this subject evaluating the factors that determine the color of total lunar eclipses. In this second article, I cautioned about wrongly interpreting the colors in photographs of any lunar eclipse. Some members of the Audiovisual (AV) Department here at Answers in Genesis joined us at Johnson Observatory and took some photos of the October eclipse. 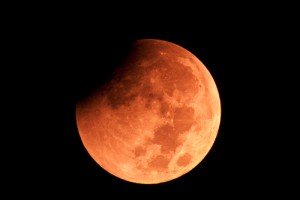 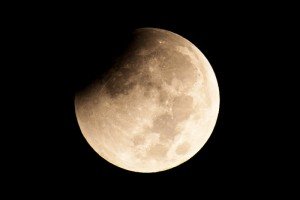 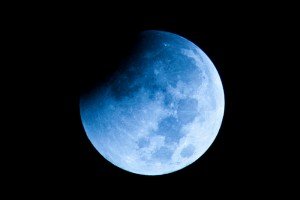 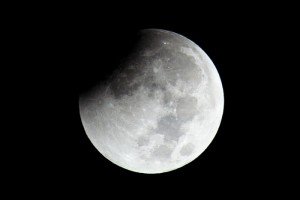 The four images shown here illustrate the problem in properly interpreting colors of lunar eclipses. The first photo appears red, and some people looking at it might think that it proves that the eclipse indeed was a blood moon. But look at the second image—the moon has at best a slight hint of some orange/red tint. However, the third one is very blue, and the last one appears to have no color. Why is there so much difference? All four of these images are from the same photo. The photo was taken early in the initial partial phase of the eclipse, when virtually no color is noticeable to the eye.

Any color would be in the umbra, the dark shadow to the upper left, but at this early stage of a lunar eclipse, the umbra appears black and hence has no color. The effective temperature of the lighting of each image has been adjusted to produce the different colors. I worked with two members of the A/V staff to try to reproduce what this stage of the eclipse actually looked like to the naked eye. The three of us agreed that the fourth image (the one with no noticeable color) best matched what we saw. Unfortunately, we didn’t have a good image taken during totality.

The evening before October’s lunar eclipse, the Answers in Genesis Facebook page linked to this second article and encouraged people to upload their photos of the eclipse. Many people did, while a number of people also commented about their displeasure with my article.

One complaint was that Mark Biltz, the gentleman who seemed to have started all of this, did not actually set a date for the Lord’s return as I either stated or at least implied. In some of his later presentations, Biltz appears to have backed away a bit from some earlier claims that he had made. However, in earlier statements Blitz most certainly did set a date by claiming that the Hebrews used the phrase “no man knows the day or hour” as a euphemism for the Feast of Trumpets, so Jesus specifically identified the day. The only wiggle room that Biltz has on this is that he can’t say for certain whether this particular day will be the Feast of Trumpets this year (2014) or next year (2015). Since this year’s Feast of Trumpets has passed, it probably must be 2015.

Others complained that a tetrad of lunar eclipses falling on Passover and Sukkot have happened only three times in history, when the Jews were expelled from Spain in 1492,* when modern Israel became a state in 1948, and when Israel occupied Jerusalem in 1967. This isn't true, for such tetrads have happened before. For instance, the current such tetrad is the most recent of eight in the past 2,000 years. None of the first four tetrads coincided with events relative to the Jews. Furthermore, the tetrad that supposedly foretold the Jews’ Spanish expulsion actually happened afterwards, in 1493–1494. Similarly, the tetrad supposedly ushering in the modern state of Israel occurred in 1949–1950, after the state’s establishment in 1948.

I wish that many people who truly believe that these lunar eclipses will usher in the Lord’s return would actually look at some of these eclipses. One of my primary objections to this teaching is the presumption that since red is the most common color of total lunar eclipses that these eclipses will appear as blood. The recent eclipse primarily was gray with a bit of orange (treating orange as a shade of red). Some people even thought that the moon looked brown. If no one had been prompted to think in terms of blood, I seriously doubt that the actual color of the eclipse would have reminded anyone of blood. To call this eclipse a blood moon amounts to a misrepresentation. It sets the bar very low in the standard of what constitutes a biblical sign. Often I have seen much more blood-like color in the rising or setting moon due to simple atmospheric extinction.

I understand that many believers find encouragement in such apocalyptic messages (I once did). My first exposure to this was as a teenager in 1970 when a preacher came to town and laid out a grim picture of the world with the implication that the Lord must return by 1976. The appearance of Comet Kouhetek, “the comet of the century,” in 1973 was similarly heralded. Then there was the planetary alignment in 1982 that was going to bring about great disasters in the world leading to the Lord’s return. This was followed by the excitement of 1988 and how this marked a generation (supposedly 40 years) since the foundation of the modern state of Israel in 1948 (Matthew 24:34). This was followed in 2007 by the fortieth anniversary of the retaking of Jerusalem in the Six-Day War. In between was the hoopla concerning the end of the millennium and how this had to usher the Lord’s return (this had something to do with 2 Peter 3:8 and how there was six days, each of one thousand years for human history). More recently there was the expectation that the pagan Mayan calendar predicted the end of the world in 2012. I have a recollection of some other supposed prediction about some events in the 1990s, but the exact details escape me for the moment, but the point is that the list could go on! Since I’ve somehow managed to survive the “end of the world” multiple times, I hope that you can understand that I’m just a bit cautious about this sort of thing. In their own times, each one of these topics had many supporters who then just sort of forgot about them as the dates passed without the Lord’s return, whereupon many of the supporters simply looked for the next new possible events to bring on the end of this age.

Thirty-five years ago I gave a presentation about what was wrong with the supposed planetary alignment in 1982 to a Christian school group. A woman in the group approached me afterward quite upset that I had rained on her parade. She admonished me that I was relying too much on science and that I needed to rely more on faith and my heart. The fact that the claims that some preachers were making about the planetary alignment were supposedly based upon science had escaped her. Apparently, they could use science, but when I tried to expose the nonsense of this supposed science, that was wrong for me (this is called a “double standard”). I was reminded of this by one Facebook commenter who accused us at Answers in Genesis of relying too much upon science. It hadn’t occurred to him that Biltz and others who are arguing for lunar eclipses being harbingers of the Lord’s return were supposedly relying upon science and that I merely was trying to refute their poor science.

Let me clearly affirm that I believe in the Lord’s return, but that I don’t know when it will be (e.g., 2 Peter 3:10). There were many passages in the New Testament where Jesus said people would not know the time of His return. Both Jesus and Peter directly addressed how we ought to conduct ourselves, knowing that His return is nigh. They told us to watch, to be ready, and to be found in peace, without spot and blameless. Being overly concerned as to exactly when this might happen is a distraction from the proper conduct of our lives. We ought to live each day as if the Lord will return that day, because He might, and most assuredly, He will one day. Will we be obedient to His command to be ready?

* This was just after the Muslim expulsion from the Iberian Peninsula. The same types of conflicts were occurring that happened in Peter and Paul’s day, when the Jews insisted on Christians being circumcised and on imposing Jewish law and customs on Christians in Spain. Paul utterly opposed these things as being clearly in opposition to the gospel and even opposed Peter to his face on this issue (Galatians 2:11). After initial segregation of Jews from Christians, which didn’t solve the infighting, the Spanish Crown made a decree of banishment of the Jews.

Previous Article Black Holes: Not Seeing Is Not Believing Next Article Rock/Stars in 2015