Looking at Sunspots, Comet ISON, and the Planets

As I mentioned in my first blog post, this year we began Sun Spotting, a program of solar viewing at Johnson Observatory at the Creation Museum: 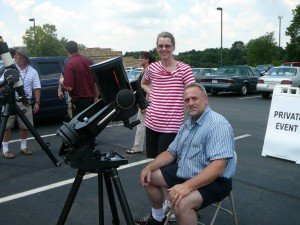 The photograph shows a few of our guests participating in one of our Sun Spotting programs on a particularly hot day this summer. You can see cumulus clouds in the sky: we had to take a brief break when one of them would block our view. The telescope in the foreground is a Celestron 8 with a full-aperture solar filter to allow us to see sunspots. The telescope to the left in the background is our Teleview refractor equipped with an H-alpha filter to see prominences.

I’ve discovered that a low-power view at first is best, and then I gradually increase the magnification. Low power is particularly important when viewing prominences. Higher magnification makes the prominences appear larger, but their surface brightness and hence the contrast isn’t nearly as good as at lower power. We schedule the Sun Spotting program on busier days at the Creation Museum, but we can schedule groups upon request.

We recently acquired a Questar 3.5 inch telescope. We used the Questar in our most recent Sun Spotting program, and I plan to use it in our Stargazer programs and take it on trips. But my primary reason for getting the Questar is to take it on Grand Canyon raft trips for the “geology by day, astronomy by night” program that Answers in Genesis does with Canyon Ministries. We needed a telescope that is small yet powerful, compact, and rugged. With its superb optics, excellent design and construction, and fitting in its sturdy 8 x 9 x 15.5 inch case, the Questar fits the bill. I’ll take it on its first Grand Canyon trip over Labor Day and hope to post photos in September. In case you’d like to enjoy this exciting program, my trip next year is scheduled for June 29–July 5, 2014.

Some of you may have seen Fires in the Sky, our informative planetarium program on Comet ISON and comets in general. Unfortunately, recent observations of Comet ISON have not been encouraging. The comet isn’t as bright as we had anticipated by this time. But comet behavior is very difficult to accurately predict, and it may yet live up to anticipations at its expected brightest in early December. Please keep visiting my blog to stay informed.

Saturn has put on quite a show this spring and summer, but it is quickly disappearing in the glare of the sun in the west. Venus will remain low in the west for a while longer, but it is approaching the other side of the sun and isn’t very good to look at. This will leave us with no planets visible in the early evening until winter.

For those who get up early, Jupiter has reappeared in the morning sky. I’ve seen it on several mornings while running. If you look toward the east about 5:00 AM, you can’t miss it–it appears as a very bright star low in the sky. Mars is to its lower left, but it’s much fainter. These two planets gradually will move into the evening sky, Jupiter by the first of the year, and Mars by next spring.

Previous Article The Perseids—Best Meteor Shower of the Year! Next Article Astronomy from the Bottom of Grand Canyon