I spent part of Labor Day weekend at one of my favorite places—Red River Gorge in eastern Kentucky. Red River Gorge is a scenic area operated by the Forestry Service. The deep gorge is just inside the edge of the Cumberland Plateau and has about a hundred sandstone arches. I made many trips to Red River between 1974 and 1984 when my parents lived nearby. Sadly, I hadn't made it back there in about 30 years. Fortunately, Troy Lacey, a fellow employee at Answers in Genesis, has a tradition of camping and hiking in Red River with a friend on certain holiday weekends. This time I joined Troy, his friend Wayne, and Troy's son for a trip over Labor Day weekend. We camped two nights, and we managed to hike on 1 1/2 days. We visited five of the arches in Red River, four of which I had seen before, and one that was new to me.

We arrived Friday afternoon, set up camp, and then headed to Gray's Arch, a two-mile hike one-way. Gray's Arch is one of the larger and more impressive arches in Red River, and it's the favorite of many of those familiar with Red River. Gray's Arch is nice, but my favorite always has been Rock Bridge. Unfortunately, we weren't able to do Rock Bridge this time, but we're tentatively planning another trip in two months, so perhaps we will go there then. After Gray's Arch, we ate dinner and then stayed out of a rain shower. When the rain quit, we made a quick trip to Chimney Top Rock. The top is about 600 feet above the gorge bottom. It was late in the day, and the rain had produced clouds of mist that filled parts of the Gorge. It was quite a sight. 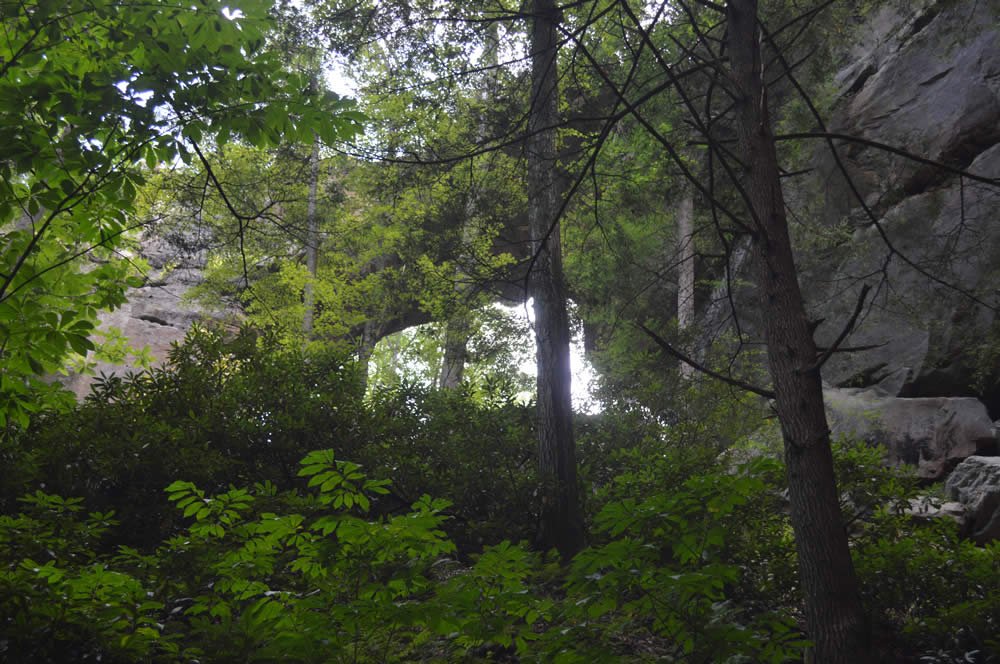 View of Gray’s Arch. Unlike out west, trees often get in the way of the scenery in Red River Gorge.

Saturday morning we hiked to Double Arch. The hike there is five miles round trip. I hadn't seen Double Arch before. There are several double arches in Red River. Usually that means that there are two arches side-by-side, but Double Arch is a double-decker. From the arch itself it's hard to see the upper, smaller arch. One can see the double nature of this arch much better from Auxier Ridge. Perhaps on our next trip we will hike that ridge so that we better can see Double Arch. 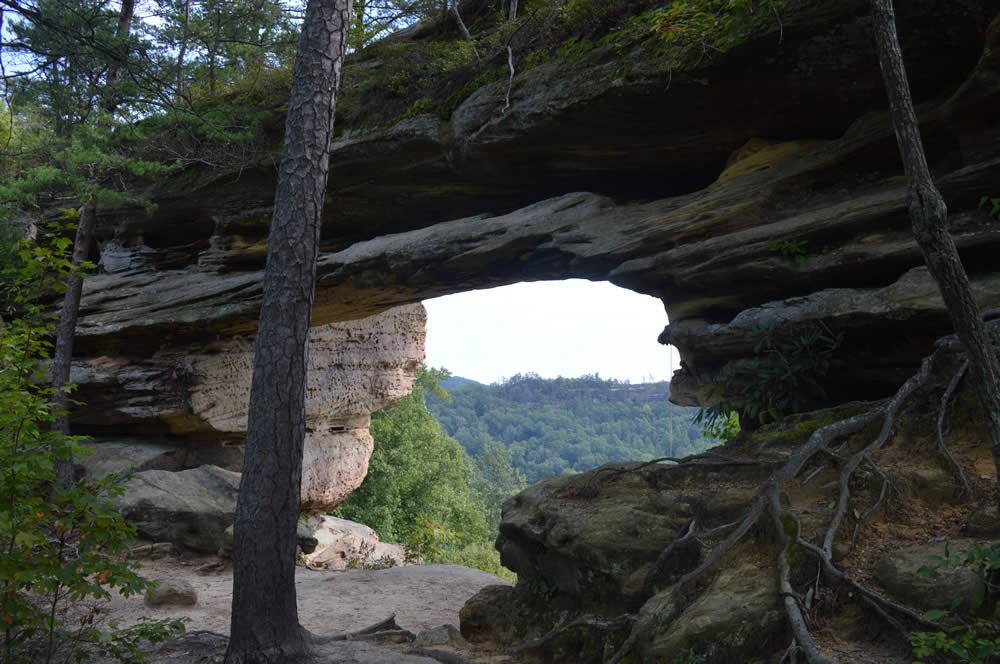 After lunch, we spent some time in the Visitor Center. The center is very informative with some nice displays and several movies to watch. I noticed as soon as I walked in the door that one of the men working there was staring at my Creation Museum t-shirt. I thought that his stare might have indicated disapproval. Before we left, I went to the desk to ask a few questions. The man asked me if I liked the museum. I told him that I did, and I asked if he have been to the museum. He said that he had many times. In fact, he had been a member, but his membership had expired. I invited him to come back. 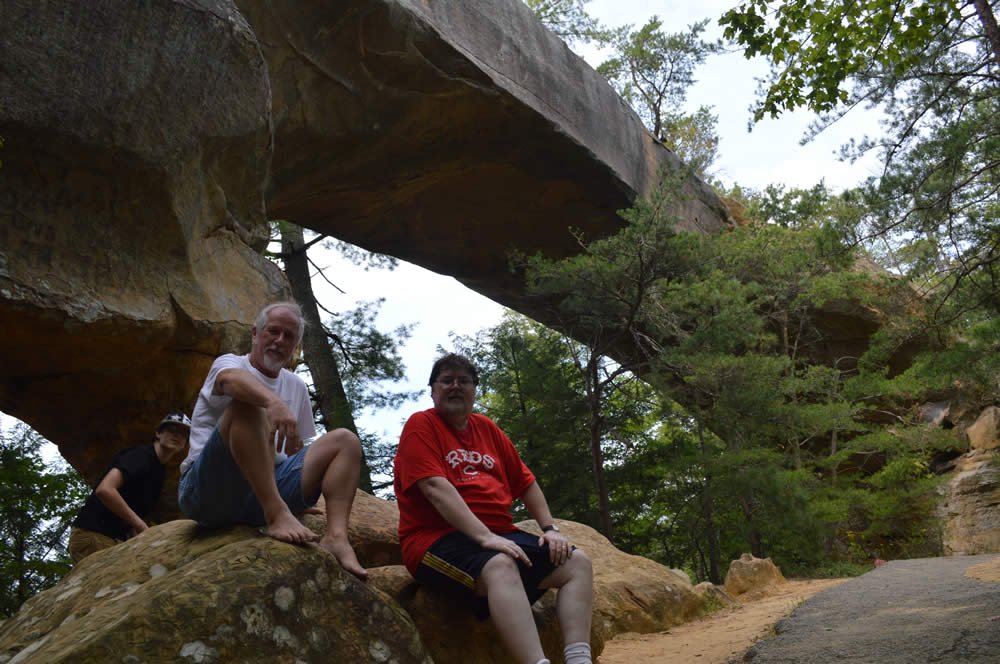 Troy and I taking a rest under Sky Bridge. 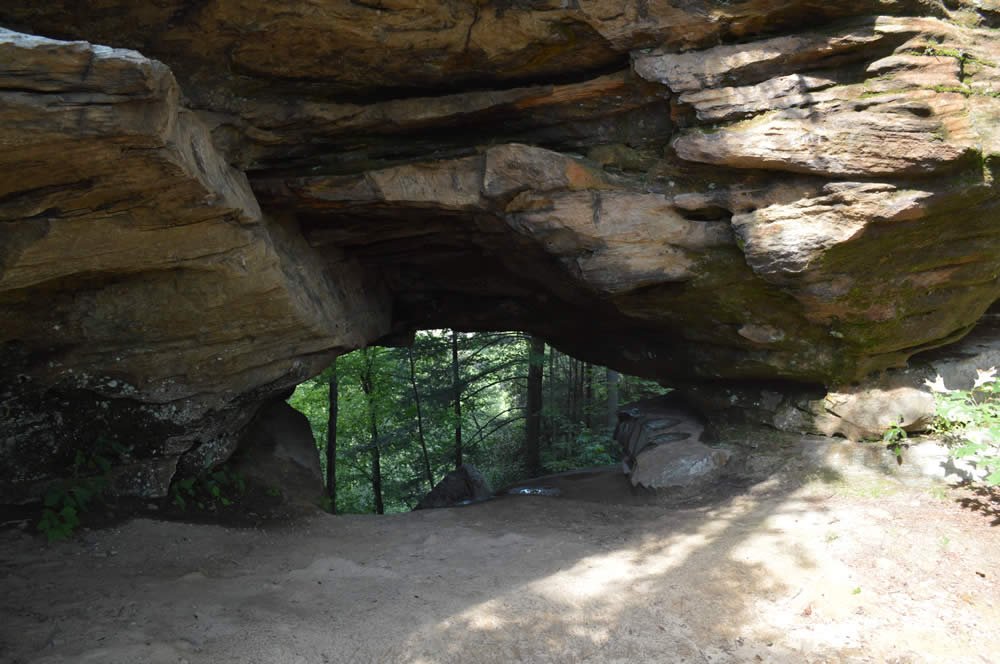 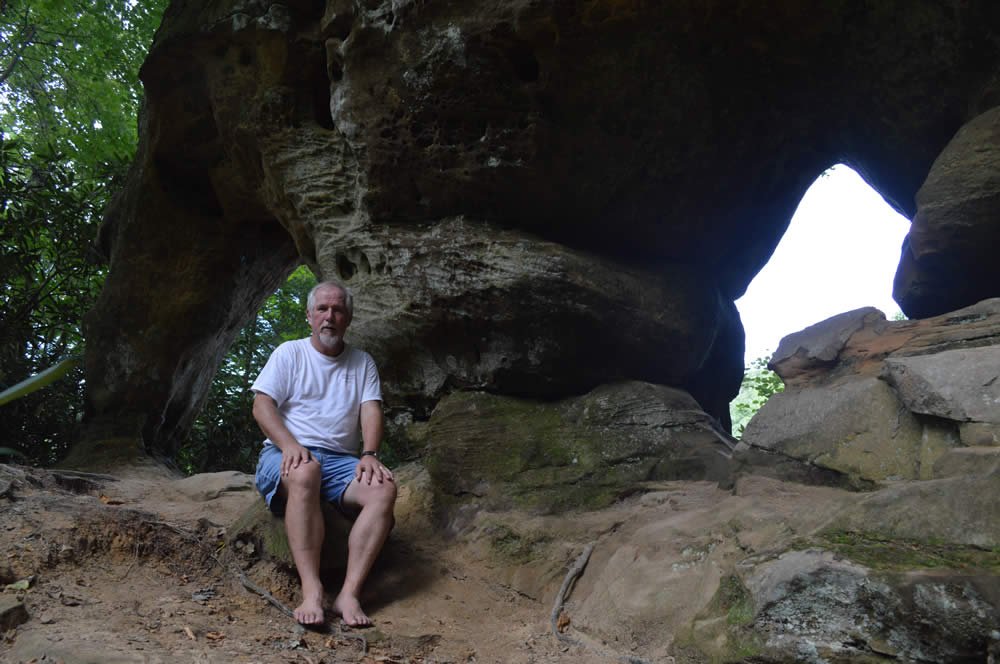 About the time that we turned in for the night, it began to rain. I had spent Friday night sleeping outside, but I moved inside the tent Saturday night. It was good that I did—it rained more than an inch that night. We had planned to break camp Sunday morning and visit some more arches before returning home, but it began to rain, and it looked like it was likely to rain much of the day, so we went home early.

To my knowledge, no creationist with expertise in geology has spent any significant time in Red River Gorge. Much has been written on geology in the creation literature on very large, obvious things, such as Grand Canyon and the Grand Staircase that proceeds from Grand Canyon up into Utah, but many fascinating places, such as Red River, are passed over. I had wondered if the rocks in Red River had an analog on the Colorado Plateau, such as the rocks in Arches National Park. I think that I got my answer on this trip. According to the maps on display in the Visitor Center, the rocks of Red River are Carboniferous, late Mississippian and early Pennsylvanian. In Grand Canyon, rocks of the same period on the geologic column are the Redwall Limestone and part of the Supai Group. Andrew Snelling, the geologist here at Answers in Genesis, has been to Red River a couple of times. I asked him about this, and he suggested that the Esplanade Sandstone, the topmost of the four formations comprising the Supai Group might be comparable to the Corbin Member of the Lee Formation in Red River Gorge, the sandstone comprising many of the natural bridges or arches. At any rate, the rocks of Arches National Park lie far higher than Grand Canyon, so they are not analogous to the Red River rocks.

Creationists probably would interpret Red River Gorge in terms of rapid erosion at the end and soon after the Flood. Just to the west of Red River is the Pottsville Scarp, an erosion feature that separates the Bluegrass from the Cumberland Plateau. We probably would interpret this feature in terms of catastrophic erosion too. For that matter, the Kentucky River, of which Red River is a major tributary, follows a deep, entrenched meander across much of the Bluegrass, with palisades along its course for more than a hundred miles. That feature suggests catastrophic origin as well. This whole region, along with the Cincinnati Arch (a related but much larger geological feature that extends across not only Kentucky, but also parts of Ohio, Indiana, and Tennessee), calls for serious evaluation from creation geologists.