Before a bird grows feathers or a mammal grows fur, its embryo must develop tiny, thickened spots that develop into feather or hair follicles. (These spots are called placodes.)1 Just as feathers and hairs are very different, so the way these placodes develop further into feather or hair follicles is very different. Reptile scales differ from both feathers and fur, and they develop in a way that is likewise very different from either. The dramatic differences between scales, feathers, and hair—whether in the developing embryo or in their mature form—have made it difficult to connect the evolutionary dots between reptiles, birds, and mammals.

Evolutionists are convinced, however, that both birds and mammals evolved, though along separate paths, from reptiles. Therefore, they have searched diligently for a connection between the signature coverings of these three groups. Now evolutionary biologists Nicolas Di-Poï and Michel Milinkovitch believe they have found this scale-hair-feather connection in the previously undiscovered reptilian embryo’s placodes.

Many evolutionists believe, to varying degrees,2 that the observable changes a maturing embryo undergoes retrace the evolutionary journey it supposedly took to become what it is. (This popular evolutionary myth is called recapitulation—the belief that a structure forms in an embryo by following the same steps it presumably followed as it evolved its various forms over millions of years.) The discovery of placodes on reptile embryos is being seen as proof of the evolutionary connection between reptilian scales, bird feathers, and mammalian hair.

Before their surprising discovery that reptile embryos had scale-associated placodes, Milinkovitch explains, “People were fighting about the fact that reptiles either lost it [the embryonic placode], or birds and mammals independently developed them [embryonic placodes]. Now we are lucky enough to put this debate to rest, because we found the placodes in all reptiles: snakes, lizards and crocodiles.”3

Before June 2016 scientists did not know that reptile scales were preceded in the embryo by anatomical placodes. Then Nicolas Di-Poï and Michel Milinkovitch reported in Science Advances that they found these placodes in snakes, lizards, and crocodiles. The placode-stage of a reptile embryo’s scales, it turns out, is very brief and easy to miss, only 12 hours. Reptile embryos also develop their short-lived, pre-scale placodes at different locations on their bodies at different times. The embryonic placodes for bird feathers and mammalian fur, by comparison, are more uniform in appearance and last much longer. By contrast, in a reptile embryo, “if you don’t look at the right place at the right time you don’t see any,” Milinkovitch explains. “If you look too early you see nothing, if you look too late it’s already a scale.”4

Milinikovitch and Di-Poï not only found that bearded dragon, corn snake, and crocodile embryos all have a brief placode stage for each scale on their bodies, they also found that the placodes preceding scale development are very similar to the placodes associated with embryonic feather and hair development. The cells in the placodes are similar, for instance, being tall epidermal cells that multiply slowly, compared to surrounding cells. And these placodes all use the same molecular messenger to communicate with the underlying dermis. This common protein messenger, BMP4, triggers development of a lizard’s scale, a bird’s feather, or a mammalian embryo’s hair follicle. (BMP4 is a signaling protein controlling development in many parts of the embryos of many sorts of organisms.) Furthermore, the same sorts of genetic switches turn on the genes needed to produce the placode for the animal’s designated skin covering, whether scale, feather, or hair. 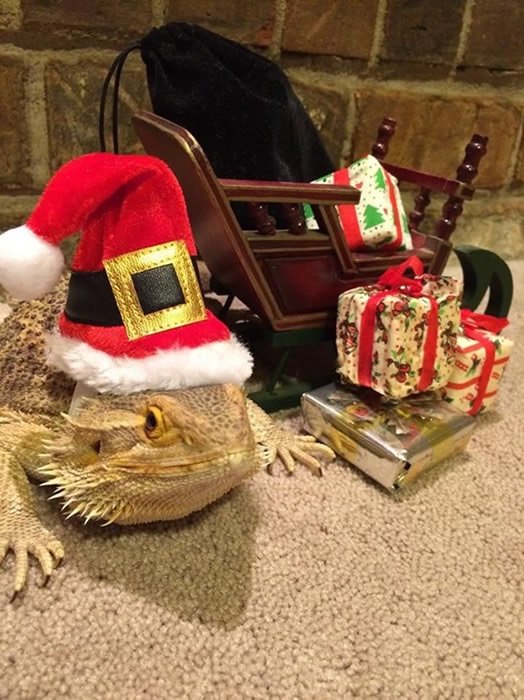 This is Tugboat, a normal bearded dragon. Like most bearded dragons, Tugboat has scales. Naked bearded dragons, on the other hand, do not have scales. Their scales do not develop because of a mutation in both copies of the gene for making a protein called EDA. This protein coordinates proper embryonic development of many skin-associated structures in mammals, birds, and reptiles. Tugboat’s photograph courtesy of Katie McDuffee.

Why Are Naked Bearded Dragons Naked?

While Milinkovitch and Di-Poï did not start out looking for placodes on embryonic reptiles, their landmark discovery was no accident. Their work began as a search for the reason naked bearded dragons are scaleless. When they looked for the genetic underpinnings of the bearded dragon’s nakedness, they discovered the mutation that causes naked bearded dragons to be born without scales is the same sort of mutation that causes abnormal teeth, nails, and sweat glands in people.5 The mutated gene is called EDA. The effects of the gene in the bearded dragon are “co-dominant.” In other words, lizards with one copy of the mutant EDA gene have fewer than normal scales, and lizards in which both copies of the gene are abnormal are completely scaleless.

Lizards with one copy of the mutant EDA gene have fewer than normal scales, and lizards in which both copies of the gene are abnormal are completely scaleless.

The comparison of the effects of EDA mutation in birds, mammalian animals, and humans to the fact the EDA-mutant bearded dragons also had an obvious skin abnormality—lack of scales—clued the researchers in to the importance of EDA in the proper embryonic development of skin-associated structures whether in mammals, birds, or lizards.

“We were like ‘Whoa! That’s the same gene,’” says Milinkovitch. “There must be a link here because this guy [the naked bearded dragon] doesn’t have scales, and in birds and mammals when that gene is mutated they don’t have hair or feathers.” Therefore, because visible placodes precede the appearance of hair and feather follicles in mammal and bird embryos, the researchers diligently searched for reptilian placodes and finally found them in several sorts of reptile embryos. “When we investigated normal snakes, normal crocodiles and normal lizards we found placodes everywhere,” Milinkovitch explains.6 Everywhere except naked bearded dragon embryos, that is.

Because similar embryonic placodes with their associated signaling molecules precede the development of scales, feathers, and fur, Di-Poï and Milinkovitch conclude that birds, mammals, and reptiles all inherited the placodes that develop into feathers, fur, and scales from the same evolutionary reptilian ancestor. They write, “This set of new results coherently and conclusively indicates that most skin appendages in amniotes are homologous; that is, they all evolved from a shared common ancestor that exhibited appendages developing from an anatomical placode and expressing a set of signaling molecules still involved in the development of scales, hairs, and feathers of extant species.”7

From their reptilian placode discovery these scientists confidently infer an evolutionary tale. But is their conclusion as valid as they think? Not at all! These scientists did not observe anatomical placodes evolving into anything. Placodes are simply observable spots on an embryo that mature into some sort of structure such as a sensory organ or a skin-associated structure. The pattern of the placodes in the embryo mirrors the pattern of hair or feathers or scales in the maturing organism, be they body scales, wing feathers, or swirls of fur. Reptilian scale placodes mature into reptilian scales, just as feather placodes mature into bird feathers and mammalian hair placodes mature into hair follicles. Placodes do not demonstrate how the skin covering of one kind of animal could ever evolve into the skin covering of another. Placodes are not the evolutionary predecessors of anything. Neither do they replay evolutionary history as they develop into mature structures.

The anatomical changes that take place in any developing embryo are dramatic.

Among evolutionists it has always been a common approach to look to embryos of various kinds of organisms to find evidence for the notion that one kind of organism could evolve into a new and completely different kind of organism. This is not surprising, for the anatomical changes that take place in any developing embryo are dramatic. Equipped with the worldview that life’s complexity evolved through natural processes, the evolutionary imagination can easily get the impression that embryonic development recapitulates evolutionary ancestry.

The fraudulent “proof” of this idea, produced by Ernst Haeckel, was debunked long ago. (See “Recapitulation Theory: Repackaged & Re-Applied.”) Nevertheless, evolutionary biologists still turn to the embryo to determine the mechanisms of evolutionary change that could presumably produce various anatomical structures over millions of years. And in this case they not only postulate the possible mechanism for such change but also plainly claim that the similarity of embryonic structures and signaling molecules conclusively demonstrates shared evolutionary ancestry between the very different structures of the reptile’s scale, the bird’s feather, and the mammal’s hair.

Embryonic development in each kind of animal follows the blueprint laid out in its DNA. Based on their distinct genetic instructions, diverse kinds of embryos exhibit similar regions associated with subsequent differentiation into very different structures. But the evolutionary change of one kind of animal into another has never been observed in experimental biology. Embryonic similarities do not supply the mechanism for such evolutionary change because embryonic development is simply following the path dictated in its own genome. No new information or genetic instructions are evolving. Embryonic similarities are an example of the common designs created by our Common Designer, the Creator God of the Bible.

Furthermore, the same messenger molecules not only trigger developments at different locations in the same embryo but also in the embryos of different sorts (reptiles, birds, mammalian animals, and humans). (For more examples of how this works, see “Do Walking and Waterfall-Climbing Fish or the Sonic Hedgehog Gene Reveal How Life on Land Evolved?” and “Does the Spotted Gar Harbor a Fish-Finger Connection?”) The use of many similar signaling molecules and genetic switches is another example of our wise Creator’s common designs, representing a sort of biochemical economy. Such common occurrences of many biochemical molecules is not a surprise at all since God created all living things to live in the same world, using the same basic resources and functioning with essentially the same sort of biochemistry and genetic code.

Reptilian embryonic placodes have not solved an evolutionary mystery. They are not evidence for the ancient common ancestry of reptiles, mammals, and birds. Rather they illustrate the fact that things with scales, feathers, or fur were created by the same God. And God’s reliable Word, the Bible, lets us know that He created all kinds of living things about 6,000 years ago during the earth’s first six days, not over millions of years.

Previous Article Is a Limited Genetic Code Proof That God Is Not Required? Next Article Do the Big and Little Dipper Support the Bible’s Timeline?