Jewish scientists have discovered an amazing species of rhubarb that “irrigates itself” through the advanced irrigation system on its broad leaves. Engineers hope to learn from it new ideas about collecting and conserving water to make Israel’s desert bloom.

The desert rhubarb plant looks strangely out of place in Israel’s dry Negev region. Its broad, green leaves contrast sharply with the surrounding bare rocks and cacti. The rhubarb leaves grow to more than three feet across (1 m) and are deeply wrinkled, somewhat resembling the surrounding mountain ridges and valleys.

This furrowed pattern is actually the key to the plant’s survival, and it may offer lessons to nearby settlements where water is so precious.

Ten inches (25 cm) or less of annual precipitation typically defines a desert. With as little as 3 inches (7.5 cm) of rainfall annually, the Negev is one of the driest places on earth. So how does the large desert rhubarb manage to thrive so well?

This plant is specially designed to harvest water from a limited supply. When evening moisture or occasional rain settles on the leaves, tiny streams are channeled downward along the leaf valleys, where they meet at the center root system. The waxy leaf coating allows the water to bead and move easily downward, like a miniature version of the ravines that drain the surrounding hills. 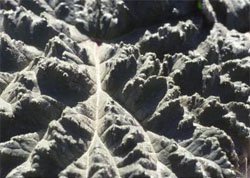 Researchers have managed to decipher the unique self-watering mechanism of the desert rhubarb, which harvests 16 times more water than other plants in Israel’s Negev region.

Curious why this plant stays so hearty, researchers decided to test its self-watering ability by simulating rain. To their surprise, the plant collected at least 16 times more water than expected. By increasing its water supply to an equivalent of 48 inches annually (3 inches x 16), the rhubarb remains green and healthy despite the harsh environment.1

Before this discovery, engineers at an Israeli company were already experimenting with a similar system to collect and conserve water in arid regions, though their design is far less efficient (reducing water use by 50 percent at best).

They designed a shallow plastic funnel with surface grooves, similar to an inverted pyramid, and then placed the funnel over growing plants. Rain or dew flows to the center of the plant, where it drips into the ground. The water collectors are called Tal-Ya, Hebrew for “God’s dew.”2

It is exciting to imagine how engineers might someday design even better ground cover fabrics that duplicate the desert rhubarb’s design. Such “smart materials” could become a standard ground cover for farms in desert climates, harvesting precious water from the dew that collects each evening.

Plants first appeared on the third day of the Creation Week (Genesis 1:9–13). Within this original vegetation, God designed marvelous variety so that the plants could easily spread worldwide and provide animals and humans with abundant food, medicine, and beauty.

In the case of the desert rhubarb, we learn other valuable lessons to aid our agriculture and survival in dry regions. Every tree and plant, even desert rhubarb, is a silent witness to the Creator.

Dr. Don DeYoung is chairman of science and math at Grace College, Winona Lake, Indiana. He is an active speaker for AiG and has written 20 books on Bible-science topics. Dr. DeYoung is currently president of the Creation Research Society with hundreds of members worldwide. His website is DiscoveryofDesign.com.
Previous Article Islam’s View of God and His Revelation Next Article “Let There Be Light”