Have you ever seen a fossil plant series in a museum display or textbook on evolution? I haven’t.

When I studied botany at university in the 1960s they taught us evolution and paleobotany (the study of plant fossils) but not a single fossil series was ever presented as evidence that plant evolution actually did occur. So, when I saw a new book recently entitled The Diversity and Evolution of Plants, dated 1995 and published by the CRC Press, a reputable publisher of top quality scientific manuals and textbooks, I was keen to see what new evidence had arisen during the last 30 years of research. The author, Dr Lorentz Pearson, appeared to be well qualified, being a Professor of Botany with a string of credits to his name.

In the Preface, Professor Pearson asserts that evolution is a fact attested to by the fossil record. The Introduction is entirely devoted to a narrative description of that evolutionary history. 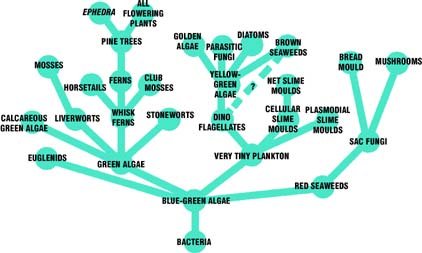 Figure. Professor Pearson's phylogenetic tree (evolutionary history) of plants. Not a single link in this tree is supported by fossil evidence. (Well-known members of the 29 classes are given, rather than the technical names.)

The main body of the book consists of 18 chapters that deal with the whole plant kingdom at the level of its 29 classes. Each chapter contains a diagram of the ancestor-descendant relationships between each class and its near neighbours and between the subdivisions within each class; such diagrams are called ‘phylogenetic trees’. On my first run through the book I combined the information in the phylogenetic trees to make a single tree so that I could see Professor Pearson’s complete evolutionary history in visual form (see Figure). I have avoided, where possible, the rather long and obscure technical names for the classes and have just identified each class with the common name of a representative member.

The figure shows that, according to Pearson, every class evolved from another class, with the bacteria being the original ancestor of all the others. There was only one questionable connection; Pearson was uncertain whether the brown seaweeds had evolved directly from the dinoflagellates, or whether they had arisen indirectly from the dinoflagellates via the yellow-green algae. According to Pearson’s diagram the history of plant evolution is almost complete.

Each chapter is divided up into consistent sub-sections, one of which is headed ‘Phylogeny and Classification’. Phylogeny means ‘evolutionary history’. So I then began to read what Professor Pearson had to say about the fossil evidence from which he derived his evolutionary histories. In the face of the confident Preface, Introduction and phylogenetic tree diagrams, what I found was rather surprising.

In all 18 chapters, not a single fossil series was quoted or illustrated to support the phylogenetic trees! Many groups have excellent fossil records, but not once does he indicate that there is unequivocal evidence of transition from one to another, as evolution requires.

His written descriptions of evolutionary history are all couched in uncertain terms, using words like ‘probably’, ‘may have’, ‘apparently’, ‘presumably’, etc. The only firm statement that I could find was this one on page 503: ‘The evolution of the Coniferales from the Cordaitales has been carefully worked out by Rudolf Florin, (Banks 1970)’. But Professor Pearson appears not to have read the work by Florin, as his reference is not to Florin’s original work but to another author (Banks) who merely referred to Florin’s work. All of which suggests that Professor Pearson had no firm evidence at all in front of him when he made his grandiose claims about evolution within the plant kingdom!

And not only is there a lack of positive evidence for evolution, there are even contradictions between the tree diagrams and the written descriptions. On p. 367, his phylogenetic tree shows that in the calcareous green algae there are two sub-groups, one of which evolved from the other. But on p. 386 he says this class has an excellent fossil record which shows that the two sub-groups were separate from the beginning! On p. 407, his phylogenetic tree claims that the mosses evolved from the liverworts, but on p. 413 he lists four reasons why this arrangement is not supported by the fossil evidence! And on p. 447 he admits that there is ‘considerable difference of opinion’ on the alignment of the upper part of the phylogenetic tree, where a lot of the best fossils are!

So, has the case for plant evolution advanced at all in the last 30 years? The answer seems to be a resounding ‘no’!

Like so many other people, Professor Pearson appears to have just assumed that evolution is a fact, and has filled in the gaps in the evidence with imagination. Here is an example: on p. 550 he reports that ‘Herngreen (1974) studied Chloranthus-like stamens of fossils from the Turonian epoch (Cretaceous) and reported that the fossilized pollen grains were identical to those of extant Chloranthus, thus casting light on the evolution of Chloranthaceae’. Notice that the evidence showed no evolution (the fossil pollen was identical to modern pollen) yet Professor Pearson says this casts light on the evolution of that family. His belief in evolution turned the evidence for no evolution into evidence for evolution!

I think it is not unreasonable to conclude, from the evidence available, that plant evolution never happened.