“Cute” may not be the best word to describe water bears. But once you learn more about them, words like “indestructible,” “one of a kind,” and “unbelievable” jump to mind!

According to Romans 1:20, the Creator is clearly seen in all that He made. One creature in particular seems to show a side of God’s creativity and provision like no other—a tiny animal known as a water bear. It is so distinct from other animals it belongs in its own phylum,1 called Tardigrada.

Never growing more than 0.06 inches (1.5 mm) (smaller than the thickness of a quarter), water bears dwell in a diversity of environments, from the highest mountains to the deep sea. To survive these extremes, they have an amazing ability—they can enter a sort of hibernation. In this state a water bear is called a tun.

In this condition, they can survive being boiled in water and frozen to almost absolute zero (where all molecular motion ceases). Curious about the limits of their survivability, scientists discovered that water bears can survive pressure up to six times the deepest ocean trench’s pressure. When subjected to the complete vacuum of space and direct radiation from the sun, they lived. Water bears can even survive for almost ten years totally dehydrated. To resurrect them, all you have to do is add water.

The name water bear came from the fact that their walk is remarkably similar to that of a bear, though the similarity ends there. Water bears have eight stumpy legs, each end sprouting four to eight claws. Their plump, squishy bodies are covered by a durable outer layer. Like insects, they shed this outer layer as they grow (though their armor is different from insect exoskeletons). Their mouths have two special daggers, designed to cut into plant cells and suck out the juices. 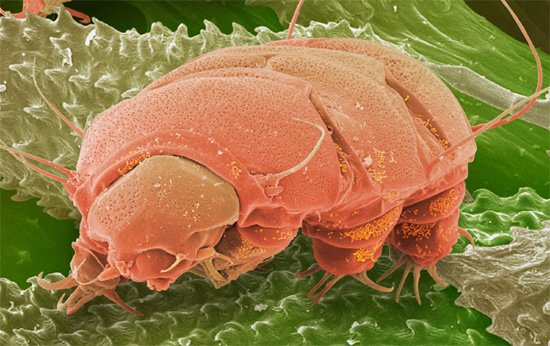 As bizarre as water bears are, they are found all over the world—from the Himalayas to the tropics to (very likely) your own backyard. Not much is known about their purpose, except that they help break down plant matter.

Essentially harmless to people, water bears lay eggs to reproduce, and their eggs can survive many of the same extreme environments as the adults.

Such a marvelous creature—so unlike anything else God made— should inspire us even more in our wonder of the Creator and remind us that His sustaining power is not limited to that which our eyes can see. Many wonders lie just below the surface; all we have to do is look.

Previous Article 10 Lessons from an Atheist Next Article Do You Believe in Ghosts?