Researchers William Ratcliff and Michael Travisano recently earned accolades for—as they put it—“re-creating” evolution. According to evolutionary beliefs, single-celled life must have given rise to multicellular life. To show how this might have happened, Ratcliff and Travisano performed an experiment with a variety of brewer’s yeast that has a quirky behavior. When it reproduces, the yeast sometimes clumps together in snowflake-like clusters.

In the lab, the researchers spun the yeast in a centrifuge and kept only the heavy clumps that sank to the bottom. They pitched the yeast cells that didn’t join together. Then they repeated this process daily for two months. Eventually all the yeast, as they put it, “evolved into snowflakes.”1 They also noted that the resulting yeast cells worked together. 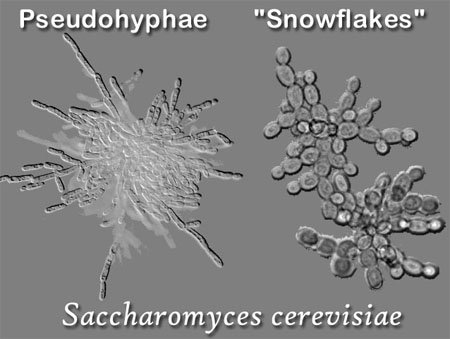 Perhaps blinded by their unwavering commitment to prove evolution, the two researchers seem to have overlooked a crucial fact: some of the yeast already displayed these qualities prior to the experiment. They artificially selected for the yeast that joined into clusters, and then they removed the genetic information from those that didn’t. Selection of preexisting traits is not the same as evolving new forms of life.

When God is tossed out of the equation, scientists have no choice but to believe a counterintuitive idea—life came from nonliving chemicals and gradually became more complex. But experiments like this, in fact, show just the opposite. The complexity of life is a great argument for the Creator and His matchless Word.