The Axis of Evil and the Cold Spot—Sear-ious Problems for the Big Bang?

The linchpin for the big bang remains the existence of the CMB.

However, by the early- to mid-1960s, the technology to detect this radiation did exist. In 1965, Arno Penzias and Robert Wilson discovered microwave radiation with a temperature of a little less than 3 K coming from all directions. This discovery of the cosmic microwave background (CMB) was hailed as evidence that the big bang model was true. Very rapidly, support for its chief competing model, the eternal steady state universe, eroded. Consequently, the big bang model has been the dominant cosmology for the past half century. The linchpin for the big bang remains the existence of the CMB, the one clear prediction of the model. However, as is often the case, the devil is in the details.

To get those details, scientists needed to gather more data on the CMB. But the earth’s atmosphere interfered with this effort, because it absorbs key portions of the microwave spectrum. To solve this problem, it is best to observe the CMB from above the earth’s atmosphere. The first spacecraft to do this was COBE (COsmic Background Explorer) launched in 1989. COBE was designed to map the CMB across the entire sky, looking for slight temperature variations.

Why would there be temperature variations in the CMB? According to the big bang model, the early universe must have had slight variations in density. Denser regions in the early universe would have acted as gravitational seeds, attracting additional matter to themselves, at the expense of less dense regions. These regions of greater density supposedly formed into stars and galaxies, giving rise to the structure that we see in the universe today. Without these slight variations in density, the structure of the universe that we see could not exist. Volumes of space that have different density will have different temperatures. Therefore, hypothetical regional differences in density ought to show up as slight temperature differences in the CMB. Using the big bang model, theoreticians had concluded that the observed structure of the universe required temperature fluctuations of about one part in 10,000. That is, since the CMB has a temperature of nearly 3 K, the variations in temperature ought to be about 0.0003 K. Confirmation of this prediction involved searching for these predicted temperature variations over relatively small parts of the sky. The instruments aboard COBE were designed to measure temperature fluctuations of this size in the CMB. However, after its two-year mission, COBE found that the CMB was perfectly smooth with regard to temperature.

After its two-year mission, COBE found that the CMB was perfectly smooth with regard to temperature.

Part of that confirmation came with the launch of WMAP (Wilkinson Microwave Anisotropy Probe) a decade after the COBE mission. Using advances in technology, WMAP had the ability to measure the small temperature fluctuations in the CMB, and soon a map of temperature fluctuations across the entire sky was produced. The map revealed two interesting features. One was a long stretch of warmer than average temperature. This defied explanation within the big bang model. Some scientists took to calling this the “axis of evil.” The second feature was a roughly circular patch with much lower temperature than the rest of the sky. This, too, defied explanation. It soon became known as the “CMB cold spot.” Since these two features could not be readily explained, some scientists dismissed them as statistical flukes that would go away once more precise data were available.

That opportunity came with the launch of the Planck spacecraft in 2009. Again, making use of advancements in technology, the Planck probe provided the most detailed data on the CMB to date. And both the axis of evil and the cold spot remained. 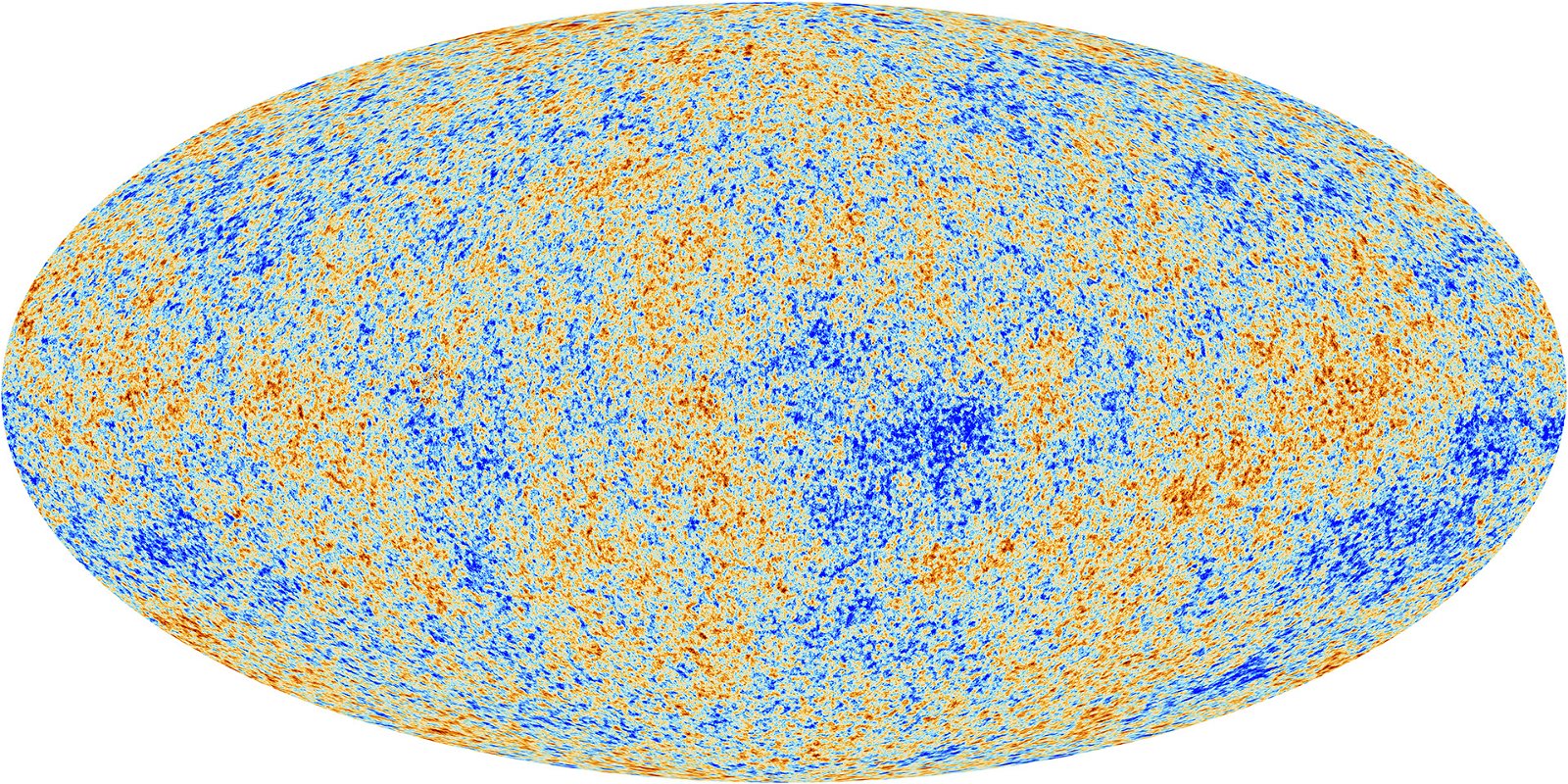 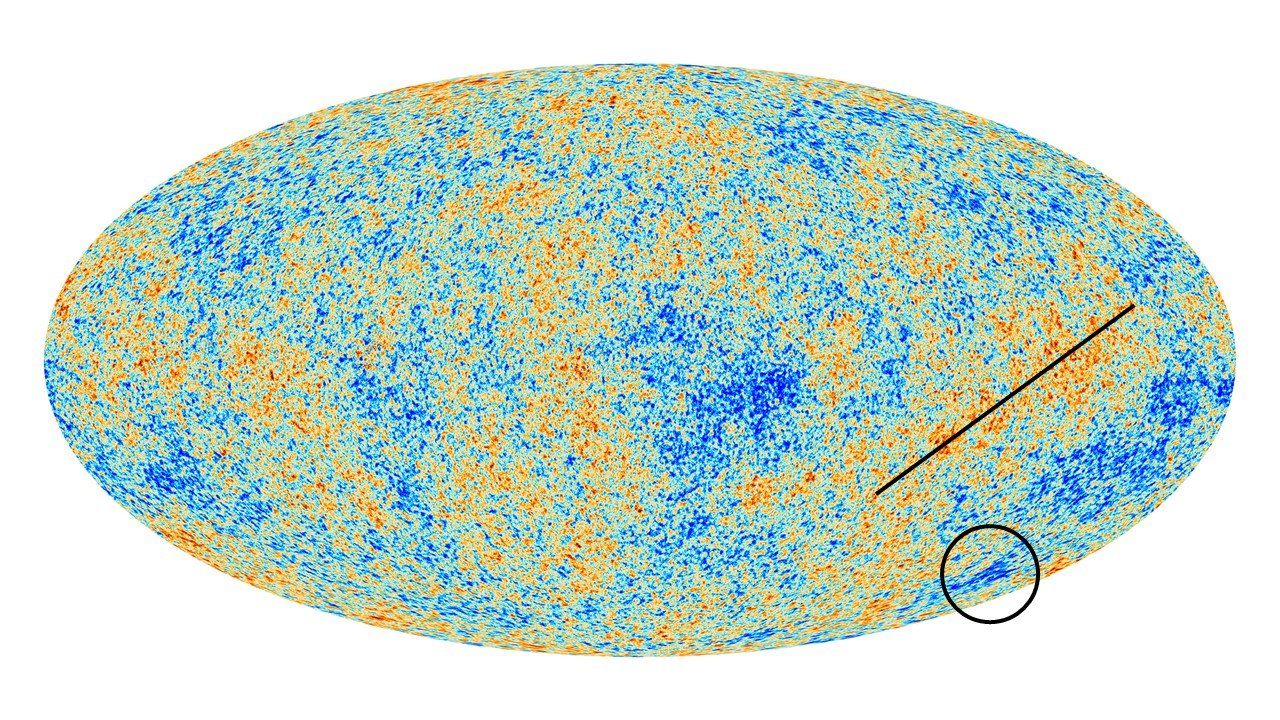 The first figure shows an all-sky map produced by Planck. The second figure repeats the map, but with the location of the axis of evil indicated by a line and a circle around the cold spot.

The Axis of Evil and the Cold Spot

There are two major problems with the axis of evil. First, there is no explanation for it in the standard big bang model. The axis of evil extends over too large an area to be due to primordial density differences. There are many properties of the CMB that the big bang model can account for, such as a slightly warmer and cooler directions in space that are diametrically opposite. That is interpreted as the result of our motion through space. However, there is no known effect that can explain the axis of evil. Second, the axis of evil aligns with the plane in which the earth and the other planets orbit the sun. If the CMB truly is cosmological, this makes no sense—why would some huge structure in the universe align with the plane of the solar system? This alignment to the plane of the solar system suggests that the axis of evil is locally generated rather than cosmically generated.

The cold spot is about 10 degrees in diameter, and it has an average temperature of 70 μK (0.00007 K). In contrast, the temperature fluctuations attributed to density variations in the early universe extend over much smaller parts of the sky and typically differ by only 18 μK from the average CMB temperature. Furthermore, some portions of the cold spot are 140 μK cooler than the average CMB temperature. This result is puzzling to cosmologists. There have been several proposed explanations for the cold spot. One suggestion is that it is the result of a supervoid in direction of the cold spot. This hypothetical region nearly void of any matter would be 6–10 billion light years away and be 500 million—1 billion light years across. By far, this would be the largest structure in the universe. However, there is no evidence for this. A more fanciful proposal is that this is the signature of another universe that left its imprint on our universe during cosmic inflation that hypothetically happened shortly after the big bang. But most cosmologists seem to be content to ignore the cold spot too.

How do secular scientists explain the axis of evil and the cold spot? There aren’t any explanations for the axis of evil. Its large size apparently is impossible to explain within big bang cosmology. Its alignment with the plane of the solar system further complicates the issue. The alignment of the axis of evil suggests that the CMB may not be cosmic in origin at all. Instead, the CMB could be a local microwave background (LMB). This has been suggested before. If the CMB actually is an LMB, then it hardly is evidence for the big bang. If this turns out to be the case, then everything published on cosmology over the past half century is rubbish. With such dire consequences, cosmologists generally ignore the axis of evil, hoping that it’s some statistical fluke. As for the cold spot, there have been several proposals, but none are satisfactory. Cosmologists tend to ignore it too.

It’s ironic that the very thing that supposedly is the proof of the big bang model may turn out to be its undoing.

As I said, the devil is in the details. It’s ironic that the very thing that supposedly is the proof of the big bang model may turn out to be its undoing. Of course, we know from Scripture that God didn’t use a big bang to create the universe. God created everything over six days (Exodus 20:11). The earth existed from the very beginning (Genesis 1:1); the earth didn’t come into existence nine billion years after the big bang.

According to the big bang model, the universe suddenly appeared in a very hot, dense, expanding state. During subsequent adiabatic expansion, both the density and temperature of the universe had to decrease. For the first few hundred thousand years, the radiation in the universe could not travel very far before being absorbed by matter. We say that the universe was opaque. The matter would reemit the radiation, but the radiation quickly was reabsorbed and reemitted. This continued until the universe had cooled sufficiently for stable atoms of hydrogen to form for the first time. Now with stable atoms, the universe became transparent, and photons of light were free to travel relatively unencumbered for the first time. Physicists say that matter and radiation became decoupled; cosmologists refer to this time in the early universe as the age of decoupling. Since the universe at this time would have been a relatively dense gas, the radiation would have had a blackbody spectrum. A blackbody is an idealized perfect absorber and emitter of radiation. Many real objects approximate blackbody behavior very well. A blackbody has a spectrum characterized by little radiation at shorter wavelengths, a steep rise in emission with increasing wavelength toward a peak, followed by a gradual decline in emission at longer wavelengths. The peak in emission occurs at a wavelength that is inversely proportional to the temperature of the blackbody (Wein’s law). Many objects are good approximations to blackbodies, so physicists and astronomers use Wein’s law to measure the temperatures of many bodies.