Discoveries of Order in the Sun

The sun is a swelling cauldron of gas. Ever heard that before? Without design and order, the sun would not supply the earth with life-giving heat and light. Curious astronomers—some of them creationists—are just beginning to uncover some of its phenomenal internal order.

Every day the sun provides us with heat and light, sustaining life on the earth. This enormous hydrogen “bomb,” over one hundred times the earth’s diameter, is truly awesome in size and power. Even as some of the greatest minds in the twenty-first century have dedicated their careers to unlocking its secrets, they have only scratched the surface.

What makes this energy source so stable? Yet why does it still have fluctuations that profoundly impact our weather and satellite communications? To answer these questions, we first need to know the sun’s structure and the paths that materials follow through the interior. But gathering that information presents a challenge, especially since we cannot see inside the sun.

Thankfully, many tools and techniques are available. Astrophysicists can use these methods to probe beneath the solar surface. The closer they look, the more structure they see. The marvelous design of this supersized energy factory points clearly to the wise Sustainer of life.

I had the privilege of participating in some discoveries, as I worked alongside solar astrophysicists at the University of Colorado, and others from Stanford University and Lockheed Martin. We used data from the SOHO (Solar and Heliospheric Observatory) spacecraft, as well as ground-based observations, to investigate motions on the sun’s surface and to probe the solar interior.

Seeing What Can’t Be Seen

A Closer Look at the Sun 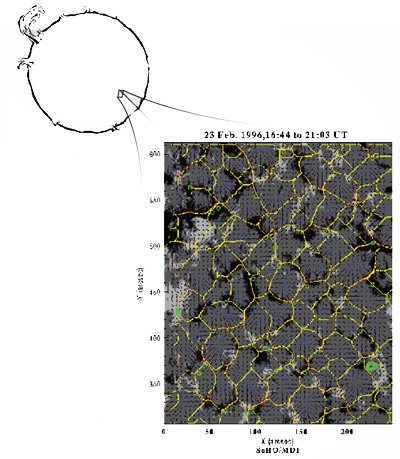 Click chart to enlarge. The sun is a beehive of activity. Plasma is constantly circulating in massive “cells,” called supergranules. The plasma wells up in the interior and moves to each cell’s edge. The above image shows the movement of magnetism on the sun's surface. The magnetic material is being pushed to the edges of the supergranules, shown in yellow. These supergranules line up in even larger structures, called giant cells (not shown). The author first detected these giant cells during his research.

How were we able to look inside the sun? Several of my colleagues were experts in a field of science called helioseismology. Just as geologists can use measurements of earthquakes to probe the earth’s interior, solar astrophysicists can use motions on the solar surface to probe deep into the sun’s interior.

The details differ, however. Whereas quakes on the earth are intermittent, the sun is constantly experiencing “sunquakes” all over its surface. These quakes produce sound waves, called p-modes—powerful compression waves that penetrate through the solar interior. These waves provide information on temperature and the movement of plasma within the sun.

My research involved measuring motion just beneath the visible surface of the sun using a technique called correlation tracking. This study led to some discoveries about the motion in this region. I used sophisticated computer software that can compare a series of images taken by the SOHO spacecraft to create a “map” showing how the material was moving. Much like the wind-weather maps you see on the news, these maps showed solar sub-surface “weather.”

Another clue to the sun’s interior is its magnetic field. The SOHO spacecraft can measure the magnetic field at the surface. Based on that information and our knowledge of magnetism, we can surmise how this field is behaving just beneath the surface.

Like the earth, the sun has a magnetic north pole and a magnetic south pole, roughly aligned with its rotation axis. But unlike the earth, the sun also has powerful magnetic “hot spots” on some parts of its surface. Very small hot spots, called “magnetic elements,” are abundantly peppered over the solar surface. Less common are larger “active regions,” which occur only at certain latitudes. These regions tend to have an east-west orientation, and are often associated with sunspots (small dark spots on the sun’s visible surface).

What causes these patterns? And what do they tell us about the flow of material inside the sun?

Part of my research involved comparing the maps that show movement of materials with maps that show magnetic hot spots. My goal was to see how magnetic fields influenced the flow of plasma and vice versa. I found that the plasma pushes around the small magnetic elements like corks floating on water. In contrast, I found that the large active regions do not move so easily, and they change the flow of the plasma.

I was most interested in one of the most obvious flow features on the sun: a pattern of “cells” known as supergranules. The arrangement of these cells looks a bit like a loosely organized beehive. A typical cell is about the size of the earth; yet many thousands of them cover the solar surface. Material wells up in the hot center of each supergranule, then pushes to the perimeter. As it cools, the material falls back into the sun.

I was also interested in another set of cells inside supergranules. These are simply called granules and can be seen directly in high-magnification images of the solar surface. They have the same basic structure as supergranules but are only about the size of Texas. The granules are constantly being pushed to the perimeter of a supergranule, as new ones form in the supergranule core. It is absolutely amazing that such complex motions and structures can be found in a large ball of hydrogen plasma!

One of my discoveries was that supergranules have a tendency to line up into north-south columns (aligned with the rotation axis of the sun). This had not been predicted by theories about the physics of the sun’s surface, so it was a very interesting and exciting discovery.

This alignment pattern is very weak, and so it was difficult to see in most flow maps. That explains why it had not been reported previous to my research. But I used some mathematical techniques to show that the alignment is very real and statistically significant.

Investigating the possible cause of this alignment led to a further discovery. I was able to detect something that had only been described in theory: giant cell boundaries. Giant cells are much larger and slower versions of supergranules. They were predicted to exist but had not been detected previously because their motions are so slow compared to supergranules and granules.

The clue that unlocked this mystery was something I noticed in my research. I found that the north-south alignment of supergranules was stronger (the cells were aligned better) in certain areas of the sun than it was in other areas. The strongly aligned regions were separated from one another by a distance that corresponded to the expected size of a giant cell. Apparently, the supergranules line up when they reach the boundary of the giant cell beneath them.

I then measured the speed at which these north-south supergranule columns moved and found that it matched the expected speed of giant cells. Additional collaboration with a colleague confirmed with computer simulation that the movement of supergranules is indeed influenced by the boundaries of giant cells.

All these discoveries should lead to a better understanding of our sun and help us to predict its future fluctuations so that we can prepare for them. But what is most exciting to me is the understanding that all this study, and even the very existence of the scientific method, is only possible because of biblical creation.

Here is what I mean. As a Christian researcher, I expected to see patterns in the data because I understood that God upholds the universe in a consistent, orderly way. Secular researchers have the same expectation of order, but there is no logical basis for it in an evolutionary worldview, where everything came about by chance. Furthermore, I knew that God created my mind and senses so that I could learn more about the universe through observations and careful analysis. Of course, my secular colleagues also expect to find order in creation because they also know in their heart that God upholds the universe in a consistent way (even though they may verbally deny this).

It is ironic that evolutionists sometimes portray creation as unscientific, when in reality creation is the foundation for the discoveries in science. All science is creation science.

Dr. Jason Lisle is a Christian astrophysicist who researches issues pertaining to science and the Christian faith. Lisle earned a PhD in astrophysics at the University of Colorado in Boulder. Dr. Lisle has worked at Answers in Genesis, the Institute for Creation Research, and is the Founder of the Biblical Science Institute.
Previous Article Sugar Beets—Farm-Fresh Deicers Next Article Experiment: What You See Isn’t Always What You Get