Image by Planet Volumes, via Unsplash. 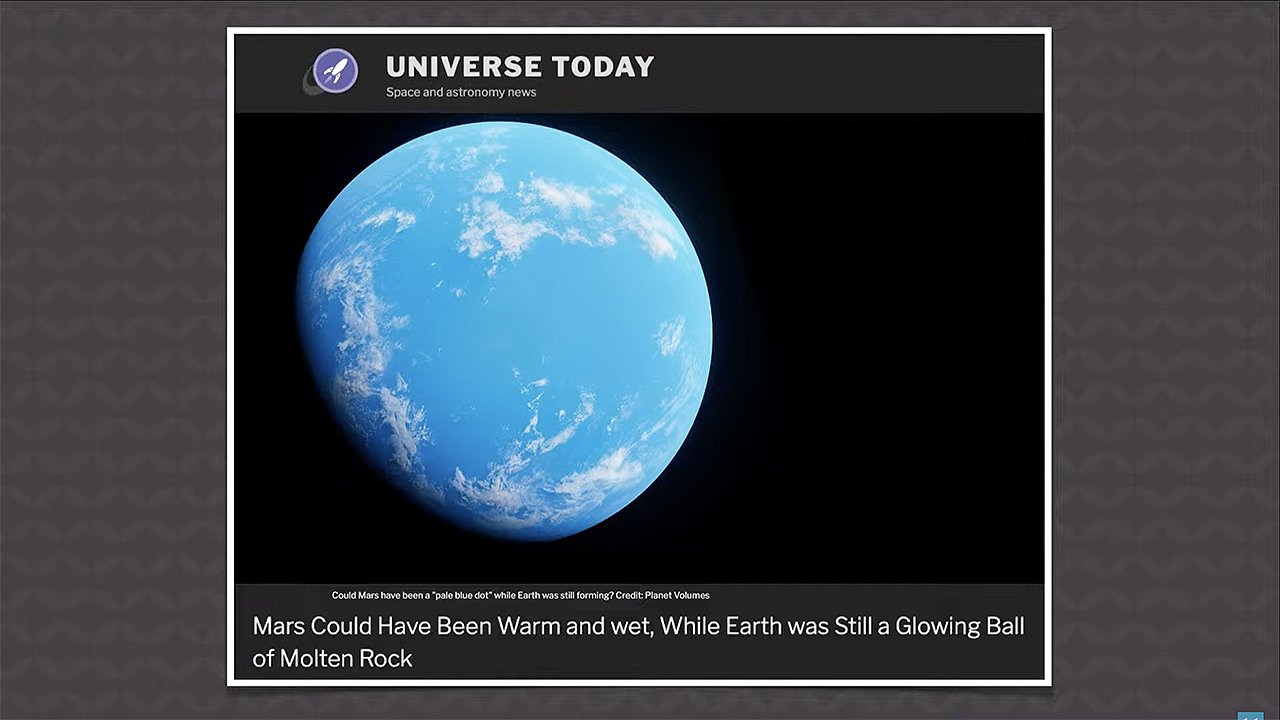 When you think of a pale blue dot hanging in the vast nothingness of space, I doubt you picture our celestial neighbor, Mars. After all, Mars is nicknamed “the red planet” (and rightly so!). So why did a recent article refer to Mars as “a pale blue dot”?

The evidence for water on Mars is so strong, many planetary scientists believe it was once subject to a global, or near global, flood!

Well, there’s abundant evidence, such as river channels and ancient shorelines, that Mars was once a much more watery place, perhaps even “warm and wet.” In the article I referred to above, the author is summarizing new research on the history of Mars, specifically that perhaps Mars had a dense atmosphere made of hydrogen that allowed liquid water to flow across its surface. Of course, the author places this in the very distant past of 3.7 to 4.2 billion years ago (of course, Mars is only 6,000 years old, having been created on day 4 of creation week). In the astronomical evolution timeline, this is when earth was supposedly still just a hot molten blob.

The evidence for water on Mars is so strong, many planetary scientists believe it was once subject to a global, or near global, flood! And yet no liquid water has been found anywhere on the planet today.

This article reminded me of the foolishness of man. These scientists will accept the idea that a planet with no liquid water could have been flooded, but they outright reject the possibility that earth—a planet covered in over 70% liquid water—was once catastrophically flooded. And the evidence is all around them that earth once was!

And that’s just some of the evidence!

These scientists aren’t unintelligent people. But they reject the obvious because of their assumptions about the past. They believe life evolved on earth and that our planet is 4.5 billion years old, and therefore they must reject the idea of a global catastrophic flood. After all, such an event would’ve wiped out all the “evidence” for millions of years!

Of course, if the Bible mentioned a catastrophic flood on Mars, these scientists would reject the idea—because they reject the Bible!

As AiG astronomer Dr. Danny Faulkner put it in his article, “Global Catastrophe—Anywhere but Earth,” written for our Answers magazine a few years ago:

Today, Mars has no standing water and no evidence of active volcanoes.

An ocean once covered a large part of the planet.

Today, earth has thousands of active volcanoes and clear evidence of moving tectonic plates. Vast oceans cover 71% of its surface.

The entire earth also exhibits much evidence of even greater catastrophe in the past, including piles of ocean sediments on top of mountains, miles thick. We also find thick ocean-laid deposits that stretch across multiple continents.

Yes, there was a global flood—maybe on Mars, but definitely on Earth!

Yes, there was a global flood—maybe on Mars, but definitely on Earth! How can we know? Well, not just because of the overwhelming evidence all around us, but because the eyewitness to all of history has recorded this event for us in his Word.

This item was discussed yesterday on Answers News with cohosts Rob Webb, Bryan Osborne, and Dr. Georgia Purdom. Answers News is our weekly news program filmed live before a studio audience here at the Creation Museum and broadcast on my Facebook page and the Answers in Genesis Facebook page. We also covered the following topics:

Watch the entire episode of Answers News for October 31, 2022.