Ghost Craters—Evidence of a Young Moon

Sometime in its past, the earth’s moon was pounded with thousands upon thousands of meteors. Is it possible to reconstruct the sequence of these strikes, shedding light on the Bible’s teaching about the moon’s creation? The key may be unusual craters known as ghost craters.

With a bit of imagination, you may occasionally see a man lurking in the outlines of the moon’s darkest regions. This shadowy figure, so much a part of myth and legend, isn’t real. But “ghost craters” are real. Some mysterious event in the past turned many of the moon’s craters into ghosts.

Highlands and “Seas” of the Moon

To understand this mystery and its biblical solution requires us to look briefly at the moon’s geology.

The moon’s two main regions are differentiated by brightness. Astronomers call the lighter-colored regions the lunar highlands, due to their higher elevation. The darker regions are the lunar maria. Maria is the Latin plural word for seas. Galileo gave them this name four centuries ago, thinking the maria might have been bodies of water.

While the highlands are irregular in shape, many of the maria are circular, giving the impression that the maria are vast craters, far larger than typical craters. Indeed, astronomers recognize that the circular shape of the maria resulted from large impact events, which they distinguish from normal, smaller craters by calling the larger ones “impact basins.”

The damage caused during the formation of these impact basins was immense. They not only obliterated any previous craters but also fractured the moon so deeply that the cracks reached down to the molten layers far below the surface. The fractures provided conduits for molten rock to rise to the lunar surface and then fill the impact basins. The lava eventually cooled and hardened, leaving the maria we see today. Before the basins were filled with lava, however, many objects continued to strike the moon, leaving smaller craters inside the basins. Ghost craters are the faint outlines of these small craters, which were nearly covered by the lava that later filled the maria. 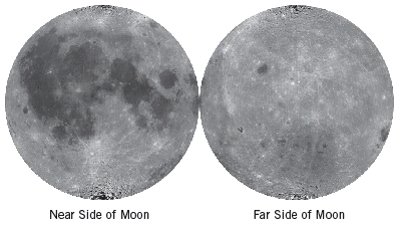 The Surface of the Moon

The moon’s surface consists of lunar highlands (lighter colored regions) and lunar maria (darker colored regions). The dark maria are made of rocks similar to basalt, and most appear on the near side of the moon.

The moon’s impact basins and ghost craters are excellent “time markers,” helping us to decipher how much time passed between the various cratering events in the moon’s history. When properly understood, they give powerful evidence that the moon is very young: since its creation, it was battered by lots of impacts over a very short time.

Astronomers long ago worked out a possible history of the lunar surface. Shortly after it was formed, the moon experienced an event astronomers call the “heavy bombardment.” The heavy bombardment came in two stages—early and late.

The early heavy bombardment was dominated by smaller impacts, resulting in craters all over the moon. These craters can still be seen covering the highlands. During the late heavy bombardment, a series of large bodies struck the moon, leaving behind the impact basins.

Before the later heavy bombardment, the elevation of the moon’s surface was relatively uniform. But the volcanic material that rose from the interior was much denser than the rock on the surface. This rock dragged down the newly formed maria, leaving the surrounding highlands at higher elevation.

Objects continued to strike the moon after the heavy bombardments. At this point, however, they crashed into two different types of surfaces. The highlands were already covered with craters, so the new impacts added craters upon craters. But the maria were relatively smooth, except for the ghost craters.

It is logical to conclude that the craters on top of the maria post-date the volcanic flow. Based on the number of craters, we should be able to estimate how active the bombardments have been since the maria were formed.

What do we see? Very few craters in the maria. This means that the rate at which new craters formed must have diminished rapidly after the late heavy bombardment.

Putting It All Together

Notice that this reconstruction gives the order of events, without any specific timeframe. The dates must be established some other way.

Most planetary scientists have adopted the philosophy that slow, gradual forces are responsible for all that we see today. Consequently, they assume that the moon, along with the rest of the solar system, is 4.5 billion years old. They also believe that catastrophic events are rare, separated by long periods of time. So they are forced to assume that the early and late heavy bombardment was spread out over a long period of time.

But how do they account for the significant number of craters that formed inside the impact basins before the lava covered them up? If impacts were rare, they are forced to hypothesize that meteorites kept hitting the moon for as much as 500 million years before lava filled the impact basins!

That delay seems strange since you would expect the lava to flow right away. This is not a problem for creation scientists, who have a much shorter timeframe. The Bible teaches that the universe is only thousands of years old, so there are several possibilities when the craters formed quickly. Genesis 1:14–19 tells us that God made the moon (the Hebrew word used is asah, “make” rather than bara, “create”). This could mean that on Day Four God made the moon from matter that He created on Day One (Genesis 1:1). The early heavy bombardment may have been the final part of this rapid and divinely directed assembly.

When Did the Man in the Moon Get His Black Eye?

If the maria were the result of random processes over a long time, they would be more equally distributed over the moon’s surface.

This distribution suggests a rapid and/or non-random process. It looks as though the meteorites struck the northern part of the moon in just a few days, before the moon had time to rotate far (it rotates once every thirty days). If the maria were the result of random processes over a long time, they would be more equally distributed over the moon’s surface.

Evidence in support of this view is the large number of craters preserved in the earth’s fossil record from the time of the year-long Flood (see “Did Meteors Trigger Noah’s Flood?” p. 68). We must conclude that a heavy bombardment struck the earth at the time of the Flood.

Perhaps an asteoroid bombardment helped initiate the Flood, and the stream of destructive meteroids pelted the moon at the same time, as they flew through the solar system. In other words, perhaps the late heavy bombardment that hit the moon also hit the earth at the time of the Flood.

If the late heavy bombardment lasted only a few days, that would explain why the moon was hit mostly on one side. (The moon didn’t have a full month to rotate, exposing its other side to meteoroids.)

All scientists work with the same evidence, and in this case, they are analyzing the same series of events. But if their starting assumptions differ, the end results can be dramatically different. Starting with God’s revelation, it’s easy to find a sensible explanation for ghost craters. Even the moon’s ghostly appearance declares the Creator’s handiwork.

Dr. Danny Faulkner is a professor of physics and astronomy at the University of South Carolina, Lancaster. He has written numerous articles in astronomical journals, and he is the author of Universe by Design.
Previous Article Did Meteors Trigger Noah’s Flood? Next Article Parent’s Corner