Can You Prove How Young the Moon Is?

When rocks were brought back from the moon a substance called neptunium was discovered to be present in them. 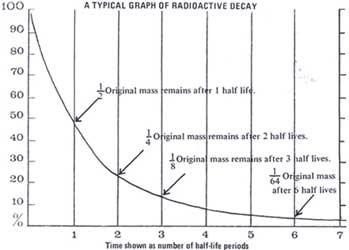 Neptunium, a radioactive element has not been found to occur naturally on earth although it can be manufactured in the laboratory. Scientific literature sometimes uses this data to “prove” that the world must be very old, since if the earth were young, Neptunium should exist naturally. This argument sounds logical and has widespread acceptance.

According to Evolutionary Cosmology the moon is at least as old as the earth (a believed 4.6 billion years). Therefore to be consistent, Neptunium on the moon creates interesting problems for those who adhere to a belief in an old age for the earth. We hope you can solve them! It is also a useful assignment to hand out to the more mathematically inclined amongst grades 10, 11, or 12 science students when you are dealing with the age of the earth and the solar system.

Reasoning: (We’ve helped you a little—for Question 1, just fill in the space) 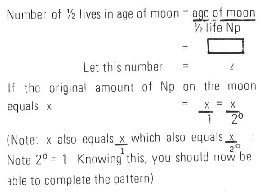 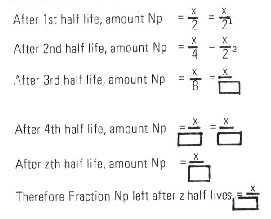 (Note: Most calculators will not handle this calculation. Use longhand method.)

When you’ve worked this out you should be able to answer question 1.

Question (2) What would be the best argument against using the Np on the moon as proof that the moon was young, i.e. could the Np have another origin, i.e. meteoric bombardment, so that it is not part of the original moon, etc. Explain your case in no more than 500 words.