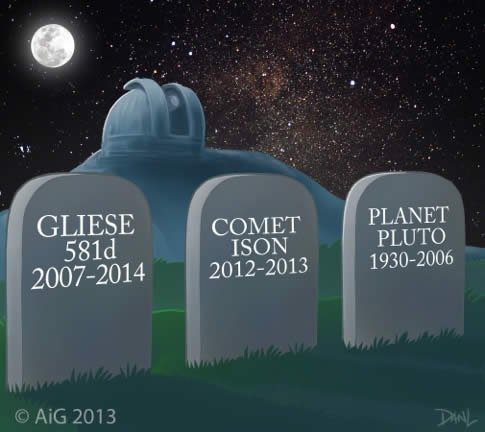 In 2007, scientists around the world were delighted when astronomers announced the discovery of the first habitable planet orbiting another star, Gliese 581d. Named for Gliese 581, the faint red star 20 light years from Earth that the planet orbited, Gliese 581d was said to be near the edge of the habitable zone around Gliese 581. The habitable zone is the relatively small region around a star within which an orbiting planet might have liquid water. Since liquid water is a necessary ingredient for life, only planets within the habitable zones around their host stars are considered possible havens for life. At the time, many people committed to that naturalistic origin of life and opposed to the possibility of creation hailed this discovery as evidence that life must exist on many planets in the universe. For instance, when discovery of a second planet even better situated in the habitable zone of the same star, Gliese 581g, was announced three years later, one astrophysicist opined, “Given the ubiquity and propensity of life to flourish wherever it can, I would say . . . that the chances of life on this planet are 100 percent,” adding “I have almost no doubt about it.”1

Previously I had pointed out problems with the star Gliese 581 that questioned whether living things could survive on a planet orbiting it.2 I left out of that discussion the considerable doubt that either planet even existed. Doubt has existed for some time, but a recent study by Robertson et al. appears to have removed all doubt.3 What went wrong? The supposed discovery of these planets had relied upon very subtle periodic Doppler motions in the host star as it and the planets orbited one another. Now it appears that the motions that were interpreted as evidence of these two orbiting planets actually came from the star itself. Hence, Gliese 581d and Gliese 581g were merely illusions. It’s almost comical that a scientist would express “almost no doubt” about life on a non-existent planet. While many people heard about the supposed discovery of Gliese 581d and Gliese 581g as planets where life might exist, relatively few people will ever know that the planets do not exist.

There are at least two lessons that we ought to draw from this. First, while some extrasolar planet detections are spurious as in this case, most are not. The techniques used in the detection of extrasolar planets are pushed to their limits, so some false detections ought to be expected. However, many other extrasolar planet detections are far more certain, and some have been confirmed by other methods. We ought not to think that because a few extrasolar planet discoveries are later retracted that none of the detections are real, for there is good reason to accept the reality of most of the more than a thousand extrasolar planets now known. Second, why was the reality of these two planets accepted so readily? The strong expectation of most scientists today is that life must exist elsewhere in the universe. This is based upon belief in the evolution of life. We like to think that scientists are objective people, untainted by bias, but we all have biases based upon our assumptions. Like anyone else, scientists tend to see in the world what they expect to see. If life is common in the universe, then it is essential that planets where life can exist must be common. Hence, the discovery of planets within their stars’ habitable zones is what most scientists expect to find, and so the supposed discovery of such planets, whether real or not, is cause for much celebration. Creation scientists are not immune to this temptation. Like other scientists, we creationists ought to be careful that we too do not read into our data what we want to see.