This year stretched the imaginations of many astronomers and cosmologists. They have discovered amazing features at the outer reaches of the universe.

And they cause headaches for those with blind faith in naturalistic origin theories—including a big bang about 14 billion years ago. 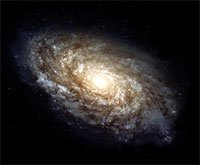 Spiral Galaxy NGC 4414 as pictured by the Hubble Space Telescope. This extremely large galaxy is rich in clouds of interstellar dust. This is seen as the dark streaks silhouetted against the arms. The measured distance from Earth is about 60 million light years.

Back in January, a team of astronomers announced the discovery of a massive and distant string of galaxies. By their own dating methods, they were looking at a structure within only 2 billion years of the universe’s inception. This was much too early for such a complex structure to have evolved naturally.1

Later this year, astronomers announced another anomalous discovery. This time, they found individual galaxies at allegedly advanced stages of galactic “evolution” in a part of the sky named the “redshift desert”.2 They used the Gemini North Telescope, with an 8-metre mirror, on the summit of Mauna Kea on the big island of Hawaii.

This area of the sky is supposed to be so old and so close to the beginning of everything that it was believed nothing as complex as a galaxy should, or could, exist there.

Under big bang assumptions, astronomers looking into the redshift desert are seeing the universe as it was 8 to 11 billion years ago, at a time when it was “only” 3 to 6 billion years old. This part of the sky had not previously been widely explored. Astronomers believed it contained objects too faint and dim to study properly. However, recent advances in telescope optics have allowed astronomers to make a systematic study of the redshift desert, the Gemini Deep Deep Survey (GDDS).3 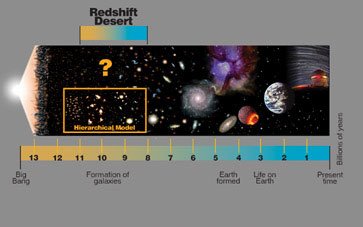 What the GDDS astronomers found was totally unexpected. Where they had expected to see young, small, still-developing galaxies, they found more than 300 fully mature galaxies, just like those seen near our own galaxy, the Milky Way.

“We expected to find basically zero massive galaxies beyond about 9 billion years ago, because theoretical models [based on the big bang] predict that massive galaxies form last. Instead we found highly developed galaxies that just shouldn’t have been there, but are.”5

This is a story that is sounding more and more familiar.

Thanks to new developments in Earth-based optical technology and orbiting telescopes such as the Hubble Space Telescope, astronomers have been able to detect fainter light from more distant objects. So they can probe the most distant reaches of space and detect objects so faint that astronomers 10 years ago did not even know they existed.

These new discoveries have shaken current theories of star and galaxy formation:

So what is the creationist response to these latest, amazing discoveries?

In Genesis 1:14–19, God tells us when He created the heavenly bodies—the planets, stars and galaxies that make up our amazing universe. The passage teaches that God commanded, “Let there be lights”, and the command was fulfilled with rapid formation of these objects—“and it was so”—all within Day 4. This is further reinforced in Exodus 31:17, “for in six days the Lord made the heavens and the earth, and on the seventh day he abstained from work and rested”. Also, Psalm 33:6 declares, “by the word of the Lord were the heavens made, the starry host by the breath of his mozuth.”

In the big bang model of the origin of the universe, galaxies started small. These small galaxies then began to collide. Eventually, after many billions of years, large, mature galaxies, like our own, were formed. This is called the hierarchical model of galaxy formation.

If the original heavenly bodies were created mature, then we would expect to see fully formed galaxies everywhere, even in the most distant parts of the universe. We should not be surprised to see massive strings of galaxies or to find supermassive black holes in all regions of space. In a nutshell, mature galactic structures are not a problem for creationist astronomers.

Australian physicist and creation cosmologist, Dr John Hartnett, says that these recent discoveries are very signi­ficant for a creationist understanding of the universe. “This has enormous significance because [the big bang astronomers] are saying they don’t see how such a structure could form so quickly according to the big bang model.” 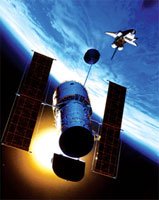 Dr Hartnett believes that the redshift methods used to measure the distances to these objects are flawed.8 A growing list of evolutionary astronomers and cosmologists, such as Dr Halton Arp, agree that the big bang interpretations of the redshifts are flawed. Arp documented many pairs of objects that have greatly different redshifts, supposedly showing that they are vast distances apart and receding at hugely different speeds. Yet there is also connecting material between them, meaning that they must be the same distance away.9

If the distances are wrong, then an object may appear small and dim not because it is incredibly distant, but because it really is small and dim.10 And faulty distances mean that any theory based on them—such as the big bang—is faulty too!

As telescope technology continues to improve and astronomers are able to probe more easily the darkest depths of the universe, it is likely more and more of these big-bang–defying discoveries will arise.

These mature galaxies present a major problem for evolutionary scientists. But the underlying models have become so flexible that it is only a matter of time until they are modified to explain away such problems. However, for the biblical Christian, these discoveries, and others like them, are sound and exciting evidence in support of the biblical creation account. This account, unlike its evolutionary counterparts, is divinely inspired, so does not need any modification and change whenever new discoveries are made. 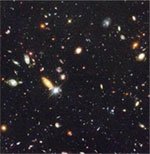 Weighing over 11,000 kg at launch in 1990, this remarkable instrument has since been in low Earth orbit 600 km above the ground (above). Among the telescope’s most amazing images is this “deep-field” view (right) into the farthest reaches of the universe. The picture covers an area of the sky approximately equal to that covered by a small coin viewed from 23 m (75 ft) away. Over 1,500 galaxies have identified in this image, which took the camera 10 days of constant time exposures to capture. The galaxies are four billion times fainter than that which can be seen by the human eye. 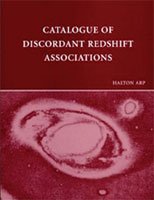 Barred spiral galaxy, NGC 4319, and the much smaller quasar, Markarian 205. Light from objects that are moving away from us is “stretched” and shifted in colour towards red (redshifted). According to the big bang idea, objects with greater redshifts are farther from us. From the redshifts, the quasar in the picture should be much farther away than the galaxy. But the picture on the cover of the book by the astronomer Halton Arp (right) shows matter apparently bridging from the quasar to the galaxy, suggesting that they are close. NASA’s recently-published image (below) shows no bridge between the galaxy and the quasar. Arp and other experts say that when the original NASA image is adjusted appropriately, the bridge can be seen. Some other quasar–galaxy pairs show similar bridging. Such evidence would raise huge problems for big bang cosmology. 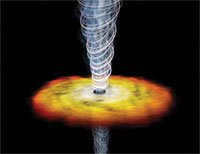 Blazars at the beginning of time

In another big-bang–defying discovery, astrophysicists from Stanford University claim to have discovered one of the biggest, most distant black holes ever found.1

The supermassive black hole is uninspiringly dubbed Q0906+6930 after the coordinates at which it is found. Astronomers believe it exists at the centre of an extremely distant galaxy2 in the direction of the northern hemisphere constellation Ursa Major (Great Bear). This galaxy is said to have an “active nucleus”.3

The black hole was detected by narrow jets of high-energy particles being ejected from its poles. Such jets are only visible when they are aimed exactly in the direction of the earth, meaning these types of objects—nicknamed blazars—are only rarely observed.

The black hole is believed to be more than 10 billion times the mass of our Sun and supposedly formed 12.7 billion years ago, when the universe was 1 billion years old.

The big problem presented by this blazar is its size. In big bang terms, it is just too big to have formed in the “mere” billion years since the big bang itself. The scientists behind the discovery have been challenged by its implications, “How do you take something big enough to hold 1,000 solar systems and as heavy as all of the stars in our Milky Way galaxy put together, and quickly crunch-collapse it [in such a short period of time]?”1 Of course size and maturity (see main article) are not a problem when the Bible, rather than man’s fallible ideas, is used as a starting point.

Some creationist cosmologists believe that the type of galaxy supposedly containing this blazar played an important role in the initial creation process. It is possible that galaxy creation on Day 4 of Creation Week involved galaxies with active nuclei, i.e. black holes.4