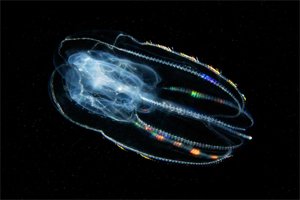 As researchers examined the “simple” comb jellies, they were baffled by their complexity.

What’s the most primitive animal on the planet today? New DNA research by evolutionists suggests the brainless comb jellies (such as the sea walnut) belong at the base of the evolutionary “tree of life.”1

Previous candidates had a brain, which made the creatures too complex in the researchers’ minds. So they determined to find a brainless creature that might be closest to the supposed common ancestor of us all. Yet even as these researchers examined the “simple” comb jellies, they were baffled by their complexity. The comb jelly directs its movement through a network of nerve and muscle cells, draped symmetrically around a gravity sensor. Guided by this sensor, eight “combs” work together to propel the creature through the water.

Another candidate scientists have considered is a seemingly simple creature known as a ciliated placozoan. This shapeless, multicellular “sticky hairy plate” crawls along underwater surfaces oozing out enzymes to digest algae. But this bloblike creature has a genome as large and complex as that of some animals with brains.

There really are no simple animals, and the simplest that do exist are so diverse that they defy any attempt to line them up from simplest to most complex.

Deprived of any uncomplicated candidates for our nearest common ancestor, evolutionists are proposing that each of the “simple” creatures they have studied actually evolved complexity from some other, unknown common ancestor and then lost information. In other words, they got simpler to arrive at their current form!

In actual fact, comb jellies, sponges, and placozoans—each equipped with fully functioning, complex features—showcase our Creator’s diverse handiwork and His care for even the “simplest” creatures.