Fossils of the tadpole shrimp Triops are found in rocks which evolutionists date at 200 million years old — yet it is alive and unchanged today.

In the previous issue of Creation magazine (Vol.16 No.3) we ran a feature on the tadpole shrimp Triops. Fossils of this remarkable little creature are found in rocks which evolutionists date at 200 million years old — yet it is alive and unchanged today. We wrote that creatures looking like Triops had been reported on the top of Australia's famous Ayers Rock (Uluru) (main picture) after rain had caused hatching of the wind-blown eggs.

Several readers subsequently contacted us — Colin Maxwell of Queensland, Carol Drew of New South Wales, and Jim Clarke of Victoria. Both Colin and Jim had climbed Ayers Rock and photographed such creatures 'mating frantically' in receding water pools, and Carol had photographed some in a creek about 100 kilometres south of Birdsville in Queensland.

At left is Triops australiensis as photographed by Colin. At centre and right are the photos by Carol and Jim. 'Living fossils' expert Dr Joachim Scheven confirmed the identification of Triops in Colin's photo, indicating that though there might be argument over whether it is truly a separate species to the one we showed (T. cancriformis), both are essentially the same as the fossil Triops.

Jim also wrote, 'This [Creation] magazine would have to be one of the most effective ways of witnessing there is.' 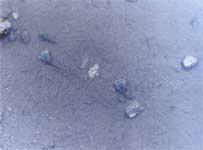 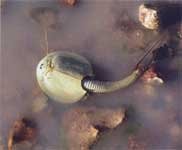 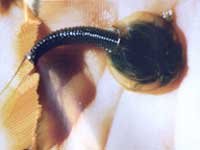