Fish out of Water Buy Book

I thought I was well prepared for college. Turns out, I was wrong.

I thought I was well prepared for college. I’d attended a solid college prep high school and was a good student. I was well grounded in a Christian worldview and knowledgeable about a host of other worldviews. I’d sunk my teeth into the basics of orthodox Christianity, the Christian classics, compassionate conservatism, and was good to go. Turns out, I was wrong.

You won’t survive as a Christian on a secular campus by simply being well versed on worldviews and different philosophies of thought. A good background on naturalism, relativism, pantheism, Marxism, communism, nihilism, and existentialism, is certainly desirable, but if you don’t know how to handle yourself when you’re under attack for being “judgmental” and “intolerant,” you can forget about using what you know about the “isms.” The most critical defensive play needed on a college campus today is the ability to deflect the labels “judgmental” and “intolerant.”

As Christians, the old approaches for being salt and light in the marketplace don’t work any more. They’re, well, old. And what works in the church no longer works in the culture. It’s pointless to reference Bible passages in a group that’s never read the book. Common knowledge regarding biblical terminology, key figures of faith, and the Judeo-Christian ethic is increasingly uncommon.

The first shocker I received when I arrived on campus was Freshman Orientation, which you should know right now is a terrible misnomer. The correct term would be Freshman Indoctrination. Many schools basically hold students hostage for three or four days and attempt to reprogram their brains on matters of moral relativism, tolerance, gay/lesbian/transgendered/whatever rights, postmodernism, New Age spirituality, and savvy substance abuse. And that’s all before the first day of classes start.

The shock waves from Freshman Orientation had barely subsided when I received a second jolt. It was an English class where required reading included not Shakespeare or Milton, but essays on why America deserved the terrorist attacks of 9/11, why we should listen to the kid killers at Columbine, and why “under God” should be removed from the Pledge of Allegiance. Other times the professor brought in obscure poetry downloaded from websites that came to him at three in the morning while he was lying in bed. This would be the same professor that scorned the Bible as a book of myths that no true intellectual believes.

I’d expected an uphill climb at a secular university, but what I didn’t expect was open hostility and ridicule.

As I relayed these incidents to my parents, their response was always the same, “And for this they charge almost $30,000 a year?” My parents went to college in the ‘70s. Things were liberal then, but not this liberal. They listened to my stories and found much of what was going on hard to believe. At times I found it hard to believe, too. As journalists, they both urged me to take notes, to document what was happening to me and around me. In an incredible irony, some of the most aggressive assaults on freedom of thought and freedom of religion today are happening on college campuses, the very institutions once touted as arenas for the free exchange of ideas.

As I experienced egregious situations here and there, I began reading and researching. Others who knew of some of the obstacles I was encountering began funneling articles and clippings my way. I soon found that the things I had experienced are not uncommon, although they don’t often garner much attention beyond the campus walls.

The indoctrination, the hype about tolerance, the selective suppression of free speech, and the singling out of Christians happens frequently. Their stories are told in this book, too. There’s a shroud of secrecy that surrounds much of what happens at college. I have taken the liberty of pulling that shroud back and giving the reader an inside look. It is my hope, whether you are a student contemplating college, a parent who is about to launch a son or daughter to college, or someone who graduated years ago, that this book will energize you, encourage you, and above all, cause you to scratch your head and consider what can be done.

This book is unique in that it’s not written by someone who went to college twenty years ago. It’s written by a college student today. Someone whose classroom experience is fresh. Someone with first-hand accounts of what happens behind closed doors.

This book takes you through orientation, into classrooms with some far left faculty members, through the dorm halls, and to the party scene. This book also addresses the fear factor that leaves so many Christian students speechless. And perhaps most importantly, this book holds the myth of “tolerance” under the microscope to see exactly what’s crawling around in there. You’ll also get a glimpse of some of the poster art adorning the hallways, a look at special events colleges sponsor, and some interesting statistics on the party scene.

This book focuses on the downfalls of secular schools. What is happening under the guise of tolerance and diversity in many college classrooms needs to be exposed. The problem is not unique to the college I have attended; the problem is epidemic. By addressing the negative aspects of attending a secular college, I run the risk of painting a tainted picture. I’ll be up front in saying there are many good things about an experience at a secular school. It’s truly a mixed bag. No school is all good, and no school is all bad.

Even though I have encountered unfairness, intolerance, and hostility on campus and in the classroom, I do not regret being where I am. I have grown to love my school. (I almost have as much school spirit as a cheerleader.) I’ve grown to love my program of study in the health sciences, and I enjoy the thrill of finally finding that niche of study that intrigues me. I love my friends and even my profs (just not on test day). My school has a lot to offer: the campus is beautiful, there are a variety of groups to get involved with, fun things to do, and the lure of a prestigious degree. And although I’ve had run-ins with liberal profs who are intolerant of Christians, I’ve also had some great experiences with liberal profs. I’ve even been fortunate enough to have some conservative professors.

I’ve taken advantage of my college experience, seeking ways to get involved and make new friendships. I’ve developed a wide range of friends, Christian and non-Christian. I enjoy that opportunity, as it would be rare on a Christian campus. I’ve learned to cherish my Christian friends and not take them for granted. I’ve been blessed to be surrounded by Christian girls in my field of study, and I realize how unique it is that we gather together to pray before each test. There are ups and downs of going to any secular school. The goal of this book is to highlight the pitfalls in order to help Christian students make well-informed choices before selecting a school and to help Christian students survive and thrive at secular schools.

This book contains information about college that you don’t get from the summer tour guides who have memorized the public relations spiel and are adept at walking backward.

This book is for every high school student who believes in God, the reliability of God’s Word, the freedom of religion. It’s also for parents, those behind-the-scenes people who usually foot the bulk of the bill. Finally, it’s for anyone the least bit curious as to what’s happening on the college scene today. This book contains information about college that you don’t get from the summer tour guides who have memorized the public relations spiel and are adept at walking backward.

This book will give you a peek behind the ivy-covered walls of the academic buildings and take you inside the classroom. You might be shocked at what you see—parents more so than students, but there are plenty of surprises to go around.

The first part of the book gives you a look at what you can expect on the academic side of things as well as some tips for being prepared and how to handle yourself. The second half of the book takes a look at the social life on a secular campus and suggestions for navigating through the maze. The book is interspersed with emails from friends settling in other secular campuses as well as from friends who are attending Christian colleges. Their insights, responses and comparisons are interesting. You will find a “Hindsights” feature at the end of each chapter that contains tips for both surviving and thriving on a “tolerant” campus.

This book also identifies a network of people, resources, websites, and organizations already aware of the battle raging behind the campus walls. They are groups that will come in handy should you choose to stay on a secular campus and need some fortification yourself. You will also find an extensive reading list on subjects relevant to issues on campus, the Christian life, and various fields of study.

My hope is that this book will give prospective students (and their parents) a glimpse into secular campus life that will help them decide if they have what it takes to wade through the muck and the mire, or if it’s too far out of their comfort zone. Honestly, that’s a dilemma I wrestled with for a long time.

Decades ago I, too, was a Christian on a secular campus. That’s hard to believe since I am now a professor in a major Christian seminary. Many of my current students are Christian graduates from secular colleges and universities. Our common bond is in Christ first, but we also share the experiences about which Abby Nye writes in Fish Out of Water. Since secular campus life has become increasingly more hostile toward the exclusivism of the biblical gospel, Christians find themselves in a distinct moral minority in the classroom and dorm. Fish Out of Water is not just an exposé. The book will help prepare the Christian student for the clash of cultures and ideologies. It is a survival manual advising students in courses of action to be taken when faced with the unique pressures of secular campus life. Abby recommends memorizing Scripture and learning how to defend one’s faith with grace, wisdom, and humor among professors and students who are illiterate when it comes to the Bible. Boldness, grace, and spiritual maturity highlight Abby’s personal anecdotes, scriptural instruction, and suggestions for prayer. In addition, an appendix lists practical electronic and print resources guaranteed to provide Christian students with both knowledge and encouragement for their own secular campus odyssey.

Fish out of Water 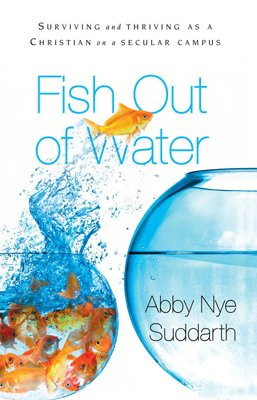 If you are a Christian heading to campus for the first time, there are several things you need to know about living your faith while surrounded by atheistic professors. This wonderful guide for college students who find their faith and values under assault will help them navigate through classes while maintaining a good GPA and a positive college experience.