Do Your Ears Hang Low?

Nature is up to its ears in, well, amazing ears of every shape and size. But far from organs just to listen with, ears are a multipurpose tool designed by the Creator to help his creatures thrive in a sin-cursed world.

In the torrid US Southwest and Mexico, the blacktailed jackrabbit’s seven-inch ears (18 cm) act as air conditioners, diverting warm blood from the rabbit’s interior. With so much ear area for the blood to pass through, heat leaves the rabbit quickly, regulating its temperature.

Hippos spend up to 16 hours a day in the water (that's why their name means “water horse”). So God designed their features for water life. Their eyes, ears, and nostrils are topside so hippos can sense what’s going on around them while partly submerged. When they dive deep, their ears can close completely.

This stylish kitty uses its long black ear tufts to dispel heat, swat insects, communicate with other caracals, and aid with camouflage. But some scientists believe the tufts also enhance the caracal’s hearing by funneling sound into its ears. The caracal’s ears are each controlled by 20 individual muscles (human ears only have six). When hunting, the caracal swivels its ears independently, pinpointing the sounds of possible prey.

The spotted bat has the largest ears of any North American bat—up to two inches (5 cm) long. Bats use echolocation by sending out sound waves and listening for the echo to bounce off prey. The spotted bat’s large outer ears help it hear low-frequency sounds like bugs rustling in the leaves. When the bat rests, the ears roll up around its head. When it’s time to hunt, the ears fill with blood and unfurl.

African elephants, the largest land mammals, have the animal kingdom’s largest outer ears. In addition to keen hearing, elephants use their ears like Swiss Army knives for many other purposes. They use these flappers to cool themselves, shoo away insects, and show excitement. Male elephants also wave their ears to waft their scent far and wide during mating season. 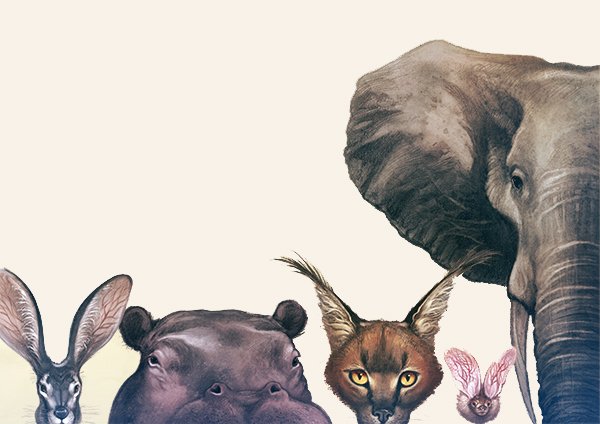 Have You Heard About These Ears?

When running up to 70 miles (113 km) per hour, the cheetah requires good balance. With longer ear canals and a bigger inner ear size than other cats, the cheetah can keep its head still and its eyes focused on dinner, even when dashing by in a blur.

Pigeons are known for their remarkable navigational skills across long distances. Scientists believe they access a detailed “sound map” made by infrasound (soundwaves too low for humans to hear) that emanate from deep within the earth, in the ocean, and even the atmosphere.

Above water, dolphins hear through two small openings on their head. Underwater, special fat in the jawbone helps conduct sound waves to the middle ear. With their keen hearing, dolphins can detect a range of sounds seven times greater than that of humans.

The wax moth detects sound through two membranes (like our eardrums) on its thorax (chest). With these simple “ears,” wax moths can sense higher frequencies than nearly any other creature. For comparison, wax moths hear 300 kHz while humans can hear up to 20 kHz. With this sharp hearing, the wax moth can detect a bat’s sonar calls and avoid being on the menu.