In Genesis 2:19 God brought the animals to Adam to see what he would name them. But that was just the gateway into God’s global menagerie. As is the case with many groups of living creatures, frogs and toads (order Anura) are packed full of surprises waiting to be discovered and unveiled. These surprises include their dizzying diversity (roughly 7,000 species to date), having a jolting disparity of different makes, models, and modes of existence.

Seeing a familiar frog afresh is a wonderful way to be more stunned by the exotic forms. So what is this familiar frog? For the US citizen, it is usually a member of the true frog family (Ranidae) that resides around ponds, lakes, and streams. As a rule, these frogs sit at the water’s edge, have slimy skin, plunge into the water at the least disturbance, and lay gobs of jelly-coated eggs in clusters. These eggs hatch into tadpoles that primarily eat algae and aquatic plants. Many of us have taken them home in a bucket to rear into frogs, an attempt that was sometimes successful if our mother dutifully kept us on task. These typical frogs are a nice, predictable platform from which we can be flabbergasted at fantastical frog life. 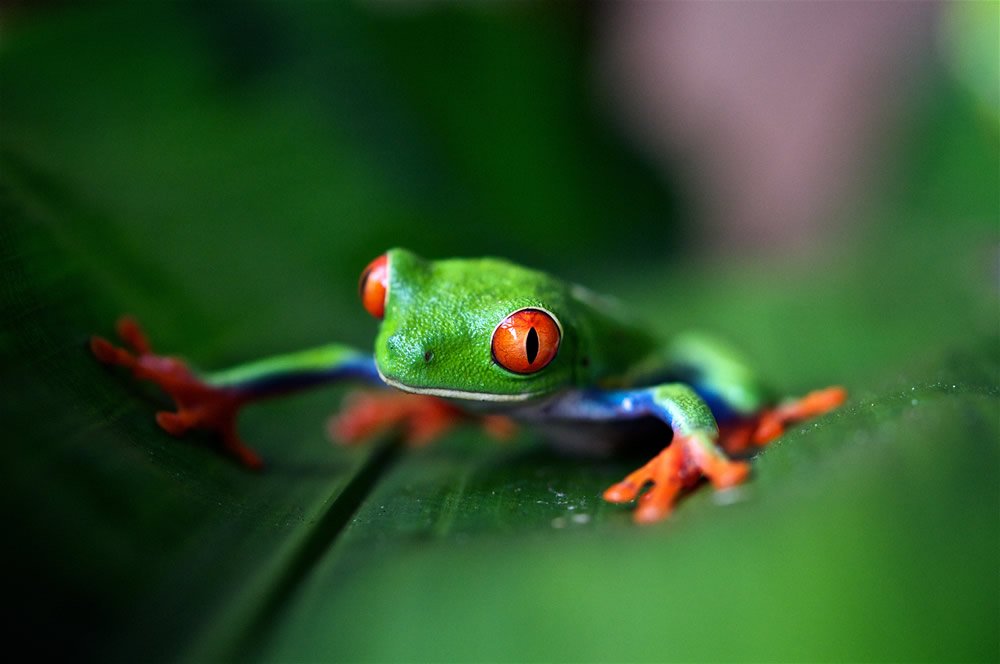 Photo by Trevor Cole on Unsplash.

But even familiar frogs that follow these “rules” are magnificently mundane. Frogs have lungs, yet many spend the winter underwater. Yes, they use lungs in the air, but that’s not their only option. The frigid water lowers their metabolic rate to next to nothing. Their thin, moist skin (maintained by mucus glands) and mouth lining allows oxygen to diffuse through their skin and into their bloodstream supplying the lower oxygen demand caused by the frigid water. If the water freezes, they stay under the ice if possible. But many wood frogs (Lithobates sylvaticus) live in places where evading ice is impossible. No problem for freeze-tolerant frogs. They can be frozen alive, even in a block of ice. Thanks to their ability to make biological antifreeze, they can keep their cells’ cytoplasm in a liquid state (a must if they are to survive), though most tissue fluid between cells or in body cavities becomes ice. Their heart stops; they are completely on cryogenic pause. During the spring thaw, their heart starts beating again. Spring has arrived and it’s time for mating. Or should I say “Froggy went a courtin’”?

“Typical frogs” mate with the male on the female’s back, embracing her tightly. This embrace is called amplexus. He then ejects sperm on her jelly-coated eggs as they pass out of her body. Is this the universal frog strategy? Not quite. Tailed frog males in the genus Ascaphus of the Pacific Northwest have a copulatory organ to inseminate the female. They mate in cold mountain cascades, so fertilizing eggs outside the female is a bad idea. Sperm would be whisked downstream before they hit their target. Most typical frog eggs are laid in variably sized clusters. We can watch their development from zygote to tadpole, for the eggs are encased in a clear jelly. Tadpoles are remarkable. These incarnated squirming commas are genetically identical to the adult frog they become, yet if we didn’t know they were the same creature and if we classified them based on anatomy, we would put them in two completely different vertebrate classes!1 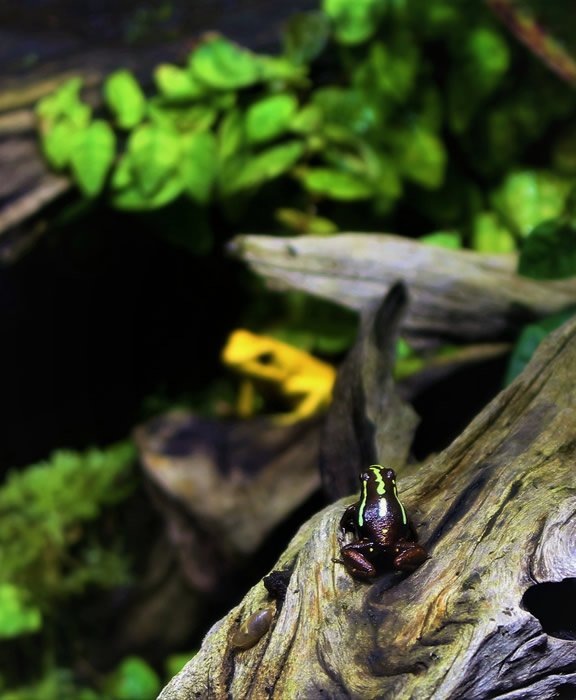 Photo by Adrian Smith on Unsplash.

Tadpoles are primarily vegetarian,2 having a very different digestive system from the adult. Early stage tadpoles have no legs but do have gills and a tail. Metamorphosis gradually transforms this fish-like vegetarian into a four-legged, tailless, gill-less predator with a radically different body inside and out. Unfortunately the word metamorphosis has grown mundane instead of magical. Metamorphosis means to change shape. Yawn. But if we ponder what occurs during this complete reconstruction of a body (that takes no day off from its daily activities), it is simply spectacular. Many frogs break the mold even here and dispense with a free-living tadpole. Some lay eggs in moist retreats on land or on vegetation. Offspring hatch out as froglets, miniature versions of the adult, passing the entire tadpole stage within the egg. Many tropical frogs lacking predator-free pools of water will opt for this mode. Tadpoles can’t hatch out on land—can they? We can’t jump to conclusions here either.

Poison dart frogs (Family Dendrobatidae) will lay their eggs on the moist forest floor. They don’t hatch out as froglets but rather as tadpoles—on the land. But they don’t stay there for long. Each youngster wiggles up and suctions to mom or dad’s back. It then gets a piggyback ride to a tiny pool of water contained in an epiphytic plant up in the forest canopy.3 Each gets its own private pool. Though this pool of water usually has no predators, it has no food either. Hopping from pool to pool along lofty, moss-covered branches, the male and female visit their offspring. Prompted by the male, she periodically deposits an unfertilized egg into each nursery pool. It’s food for the tadpoles until they metamorphose into froglets and clamber out. Darwin’s frog (Rhinoderma darwinii) of Chile and Argentina also lays eggs on the moist forest floor, but dad snaps them up and broods them in his vocal pouch. What appears to be an act of cannibalistic infanticide is actually a heartwarming act of parental care. The tadpoles hatch and remain, converting dad’s resonating chamber into a nursery chamber for about two months. Eventually they metamorphose into froglets and hop out of their dad’s mouth. 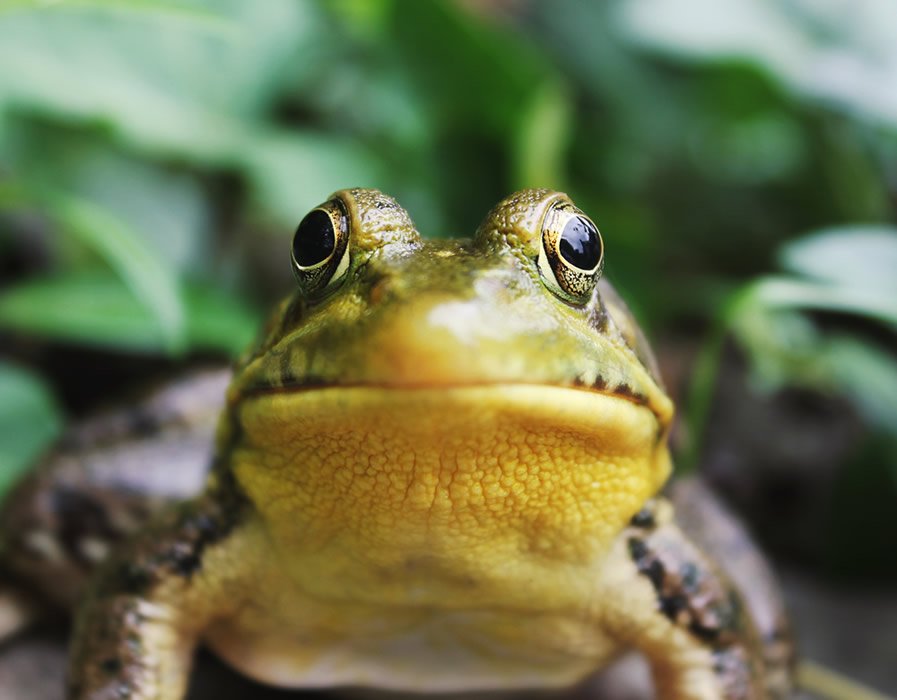 Photo by Jack Hamilton on Unsplash.

A Frog out of Water

So far our tour of fantastic frog life has regarded denizens of the damp. Typical of frogs, yes, but several genera of frogs make the desert their home. Spadefoot toads in the genera Scaphiopus and Spea are explosive breeders. When the monsoon season comes, an army of amphibians emerges from the ground and breeds with abandon in ephemeral, though often-large pools left by the heavy rainfall. Soon to hatch, the tadpoles complete development in as little as eight days (Scaphiopus couchii). If these pools dry up before they metamorphose into froglets, they’re toast, so speedy development is a must. Of course amphibians are prone to lose water. Hopping around in a dry desert is not an option. True to their common name, adult spadefoot toads have tough spade-like protuberances on their hind feet that allow them to quickly excavate the sand out from under them so they can spend hot and dry days buried in the moist, cool sand inches below the surface. They only come out infrequently on rainy nights to feed or breed.

However, like the wood frogs in the far north are unable to evade the frost, some frogs in certain deserts are unable to escape the dryness. A number of other desert frogs cope with this by shedding their dead epidermis in rapid succession,4 producing a series of skins reminiscent of Russian dolls that are parchment thin and closely spaced. This multi-layered, epidermal cocoon serves as a fairly watertight mummy bag buried underground in which the frog rides out the dry times in a dormant state, drawing stored water from its massive urinary bladder to compensate for the slight water lost through its cocoon.

But this isn’t the only strategy frogs have to survive hot and dry conditions. The arboreal waxy monkey frog (Phyllomedusa sauvagii) of South America tackles the sun and heat head on. As they enter the dry season, these frogs exude a waxy substance from glands in their neck. Using all four highly dexterous legs, they massage the wax over their entire skin while balancing on a slender twig. The gyrations, particularly those of the hind legs, put any contortionist to shame. Try slathering lotion between your shoulder blades using your feet. After amply waxing themselves, they go into a sunbather’s stupor with the tropical hot sun beating down on their little waterproofed bodies. 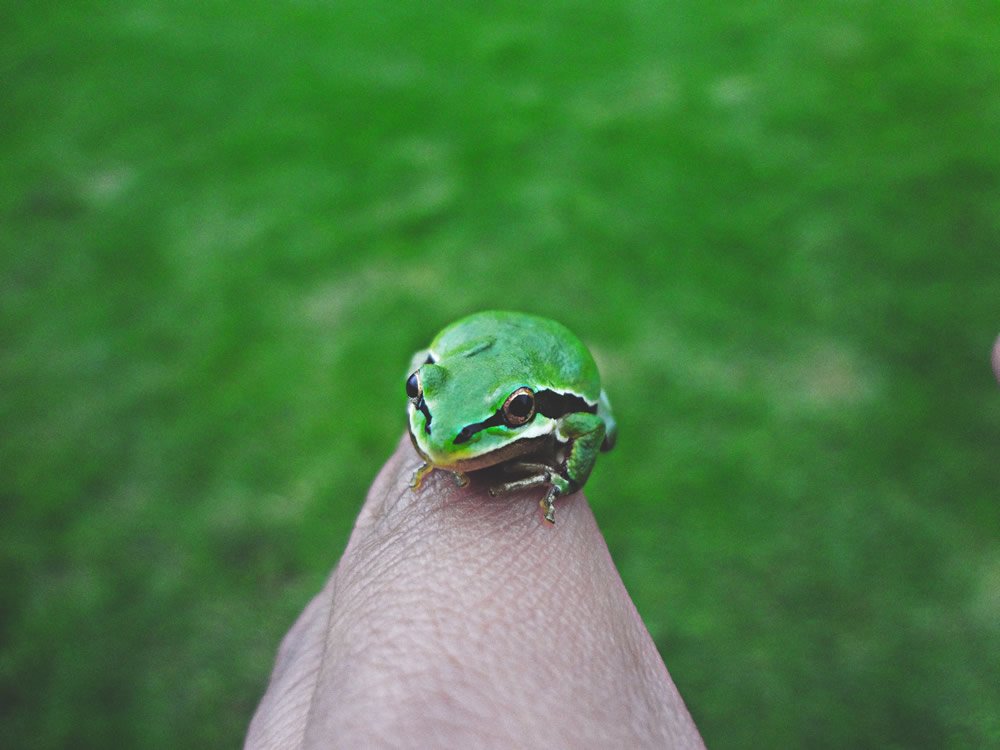 Photo by Jaro León on Unsplash.

This is a tiny fraction of frog species in the world. I could go on with little effort to maintain the flabbergast factor, but as the author of Hebrews would put it, what more shall I say? For time would fail me to tell of Wallace’s flying frog, the gastric-brooding frog (now probably extinct), the marsupial frog, the pebble toad, the glass frog, and the African bullfrog—who, through the wisdom of their Maker, can glide over 50 feet, brood tadpoles all the way to froglets in their stomach, brood tadpoles in extensive pouches under the skin of their flanks, dodge predators by going rigid and cartwheeling down mountainsides uninjured, use karate kicks to defend their clutch of eggs from wasp attacks, and save their stranded tadpoles by bull-dozing a channel from a drying mud puddle to a larger life-giving pool.

Ironically the iconic symbol of biology education is the frog dissection. That experience, whether remembered with pleasure, disgust, or boredom, reveals more about ourselves than it does about the frog. Christians should cultivate truth, beauty, and goodness in all things including biology. Dissection is mostly about one of these: truth—truth about the insides and how they work. And that’s a worthy pursuit. “Great are the works of the Lord, studied by all who delight in them” (Psalm 111:2). But let’s also move on to beauty and goodness. A dead frog laid open on a tray (though it has its place in the grand scheme of science education) should be studied in the context of the astounding array of living frogs and toads coming in a spectacular spectrum of colors, shapes, sizes, habits, and habitats. Why? Because all of it declares the goodness of our Creator—the Author of such diversity, complexity, and beauty.

O Lord, how manifold are your works!
In wisdom have you made them all;
the earth is full of your creatures. (Psalm 104:24)