Debating with an Evolutionist on Fossil Dating

Dr. Andrew Snelling, AiG–U.S., responds to a reader and gives more information regarding the fossilized wood on top of fossil belemnite.

I am writing you with a problem I recently encountered while debating an evolutionist regarding strata dating. I had cited Dr. Snelling’s article on your site entitled “Geologic Conflict.” In the article Dr. Snelling stated that Fossil wood was actually found sitting on top of a fossilized belemnite. Dr. [Snelling] also stated that the wood was found in situ. The evolutionists response was that this could not be possible as “woody plants” only grow on land while belemnite are ocean dwelling.

The only citation in the article was for support that belemnite are in fact used as index fossils, but there was nothing supporting the find of the wood on top of the belemnite. I also was wondering where I could find citations to the actual c-14 test results performed on the fossil wood, as my evolutionist opponent states that these labs would never try and c-14 test fossil wood.

I realize that I may never sway this evolutionist, but it is in a forum where I have hundreds if not thousands of onlookers watching in the sidelines that I have been trying to reach with the gospel. Plus any information you could provide me in regard would prove to be invaluable to me in future discussions.

Thank you in advance for your help with this matter and keep lifting up Jesus to the World.

Thanks for the questions regarding my article titled “Geological Conflict: Young Radiocarbon Date for Ancient Fossil Wood Challenges Fossil Dating.” I am happy to answer your questions so that you can respond to the evolutionist who is debating with you. 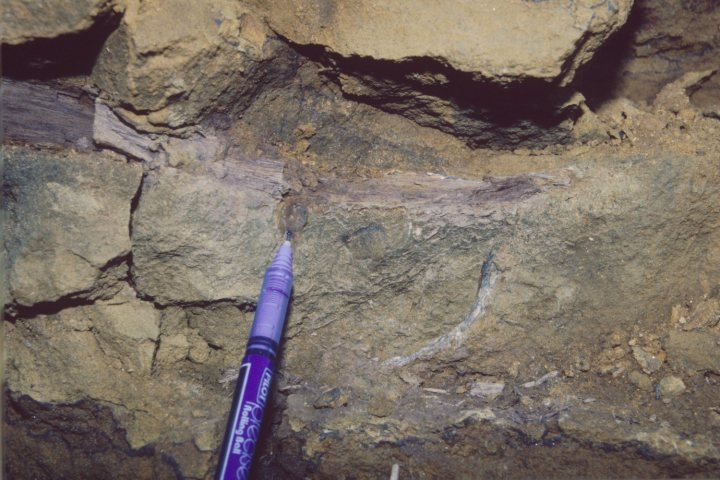 You are incorrect in saying there is only one citation given in the article (i.e., the statement that the belemnite is used as an index fossil) to support the finding of fossilized wood on top of the fossil belemnite. The article included a picture designated as Figure 5. Have a look at that again (I have included a larger version of this image with this response to you). You will see it is a photograph of one of the quarry walls at Edge Hill near Ratley, northwest of Banbury in England. The tip of the pen points to a round object protruding from a rock face. That happens to be the end-on circular profile of the belemnite fossil. That is clearly indicated in the caption of the photograph. Above that belemnite fossil is a piece of fossilized wood that sits directly on top of the belemnite fossil. That wood was sampled for radiocarbon analysis. How can you then say there was no evidence provided for wood being found on top of the belemnite fossil? The photograph doesn’t lie, and it is far more valid as admissible evidence in a court room than some citation of a document or reference. The photographic evidence settles the argument.

Just because this evolutionist says that “woody plants” could not have possibly been found with belemnites doesn’t prove this photograph is wrong. Yes, woody plants grow on land, while belemnites lived in the oceans. The reason the evolutionist can’t accept that a piece of wood that grew on the land could be buried with a belemnite that lived in the ocean is because he interprets these rocks as the remains of a former living environment. And since there are predominantly marine creatures buried in this rock layer, then this must have been a former marine environment where these marine animals were slowly buried over millions of years as lime silt and mud accumulated, particle by particle, slowly burying them. Thus he refuses to accept that wood would be buried in the same rock layer as belemnites. His presuppositional beliefs about the formation of this rock layer prevents him from allowing that as a possibility, even when there is photographic evidence staring him in the face.

On the other hand, this occurrence of fossilized wood buried with a belemnite makes perfect sense if this rock layer was formed during the year of the global, cataclysmic Genesis Flood. It is clear from what the Bible says about the earth’s history, in God’s eyewitness account of the Genesis Flood, that the ocean waters rose and swept across the continents to flood them so that all the high hills and the mountains under the whole of the heaven were covered (Genesis 7: 19–21). If that were true, then wouldn’t we expect to find marine creatures swept up onto the continents with sediments from the oceans to then be buried in those sediments with land plants up on the continents?

You see, we don’t know, in spite of what the evolutionists may claim, whether this belemnite lived at this location or not. We don’t even know where it died, but what we do know is this is where the belemnite was buried and fossilized. So if ocean waters swept up over the continents bringing marine creatures and sediments with them, then we aren’t surprised to find belemnites buried with land plants. And that’s exactly what the photograph shows.

Let’s be clear about this. The assumptions and beliefs of the evolutionists often prevent them from seeing and accepting the evidence that is clearly in front of them, both in the rock face of that quarry, and in the photograph. It has nothing to do with the evidence. The evidence shows fossilized wood from a plant buried with a marine creature called a belemnite. Clearly, waters carrying sediments buried a belemnite and wood together and fossilized them. The evolutionists can’t allow it to be evidence for the Flood because that would mean the Bible is right after all about the Flood, and also about the need of a Savior to rescue sinners from God’s coming judgment. After all, the Flood reminds us that God judged the world by water in the past, but mercifully provided an Ark for salvation for those who received God’s free offer of that salvation.

The laboratories in question even gave these samples their own “lab codes,” which were included in Table 1 in the article. Please also note that all four analyses were close together giving similar ages, even when the same sample was analyzed by two different laboratories. This means that these analyses were reproducible. Thus, this fossilized wood, which evolutionists claim to be 189 million years old based on the index fossils in this rock unit, yields a radiocarbon age of around 23,000–23,500 years.

Another possible reason is that the pre-Flood normal carbon (C-12) reservoir was much larger, diluting the amount of C-14 in living things. Both effects may contribute to the anomalous results. Therefore, the wood fossilized and buried with this belemnite is a lot younger than the ages these laboratories reported. Yet at only thousands of years old, they refute the claim that this rock unit and its enclosed fossils are hundreds of millions of years old.

I hope these comments are a help to you. May I respectfully suggest that you read our articles on the evidences for the Flood and on radiocarbon dating that we have published on our website. Thanks again for your question, and may the Lord help you as you seek to witness to this evolutionist. Remember that his problem is not the evidence, but the spiritual blinders that keep him from understanding the evidence in a way that totally supports and confirms what we read in God’s Word about the true history of the earth.

Previous Article Get the Message Across Next Article Dinosaur Extinction