The Growing Pressure of LGBTQ+ Worldview on Christians

As my wife and I were driving home from church one Sunday, I was somewhat oblivious to what was going on around me as I was thinking about what I should write in my letter to you this month. Suddenly my wife startled me as she blurted out, “Are you scared? I know God’s in control, but from a human perspective this world scares me. Our culture was very different when we grew up. So what do we do, just keep doing the things we have been doing for the Lord?”

I had been in my own little world thinking about some news articles I had received from the Cincinnati Business Courier about companies in the Cincinnati area who were given scores as to how much they supported the LGBTQ+ worldview. These are the headlines I saw:

Most of the article was about Procter and Gamble, who was held up as a great leader in this area of “inclusivity” for those with the LGBTQ+ worldview. 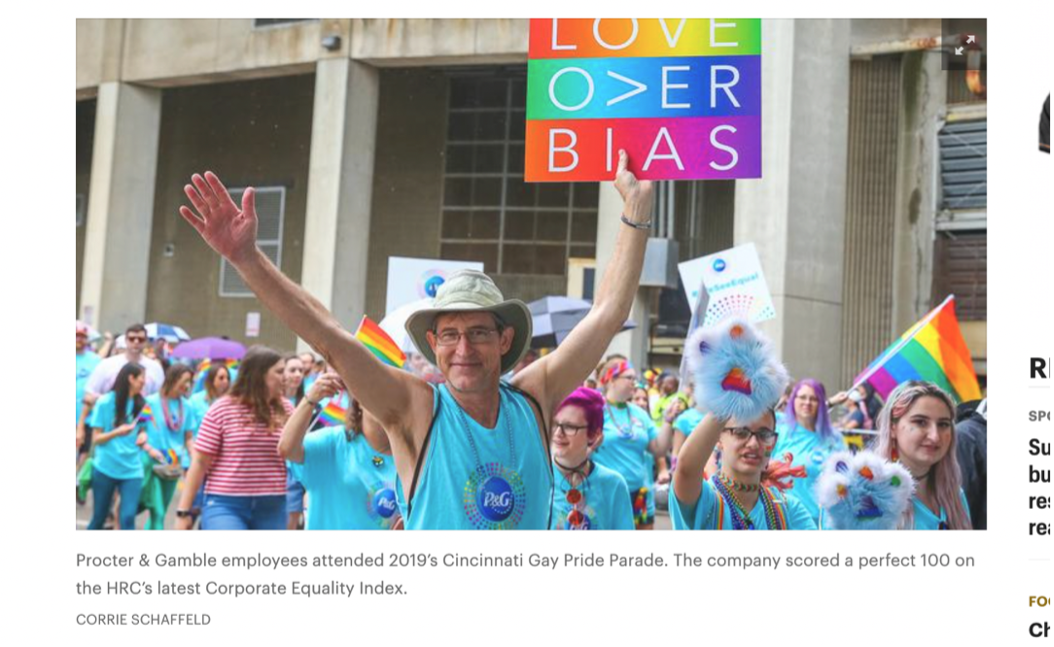 Now, note how the words below put pressure on other companies:

And Gen Z ins't a generation business leaders can afford to ignore. A separate Gallup poll, published in 2021, found Gen Z and millennials now make up nearly half, 46% of the U.S. workforce, with just over 10% of millennials identifying LGBTQ.

"If we're not being inclusive, if we're not embracing diversity, then we will not have a relevant or viable workforce," Stephanie Smith, senior vice president and chief inclusion and diversity officer at Fifth Third, said.

Secular companies like this are free to do whatever they want within the laws of the land, but “inclusivity” these days has come to mean that those who do not share the LGBTQ+ worldview (like Bible-believing Christians) are considered hateful, racist, homophobic, and intolerant.

The pressure placed on companies to force acceptance of LGBTQ+ ideals on their workforce is one thing, but sadly, this pressure has also impacted much of the church and many Christian institutions.

But there is a much bigger problem I was contemplating. The pressure placed on companies to force acceptance of LGBTQ+ ideals on their workforce is one thing, but sadly, this pressure has also impacted much of the church and many Christian institutions.

I get to talk to many of our supporters during the year, and one of the comments I hear from many of them is that their churches and/or other churches in their community are becoming softer in regard to LGBTQ+ issues. At the same time, they express how thrilled they are to support AiG because our stand on God’s Word has never (and I pray will never) wavered. Just read our statement of faith to see the strong stand we take, not just on the literal history of Genesis but on doctrines in regard to marriage, gender, and so on.

As I have mentioned before, one of the most-asked questions I get at the Ark and Creation Museum, and through phone calls, emails, etc., is whether we know of a church in their area that stands boldly, unashamedly, and uncompromisingly like we do at Answers in Genesis. Now don’t get me wrong! There are churches that do, and these churches are led by faithful pastors, many of whom are personal friends of ours and of our ministry. But sadly, they are the minority! And when it comes to Christian institutions, like Christian colleges, universities, and seminaries, those that stand with AiG are a small minority indeed. Some churches are even ordaining gay and transgender “pastors”!

You know, the devil has many different names in the Bible, such as evil one, wicked one, liar, angel of light, accuser, deceiver, father of lies, murderer, ruler of this world, ruler of darkness, enemy, tempter, thief, lawless one, and more.

I often remind people that God, through the Apostle Paul in 2 Corinthians 11:3, warns that the devil is going to use the same method on us as he did on Eve to get us to reject God’s Word. And that method in Genesis 3:1 was to create doubt regarding God’s Word so it would lead to unbelief.

Think about just a few items:

Marriage: one man and woman (Genesis 2:24)—Satan perverts it, such as in gay “marriage.”

Race: there’s one human race (Acts 17:26)—Satan perverts this to get people to believe in lower and higher races.

Sanctity of Life: humans are made in God’s image from fertilization (Psalm 139)—Satan perverts this to get people to sacrifice children in the womb by abortion.

Work: God instructed man to work, and he said that because of sin, work would be hard and difficult (Genesis 2:15, 3:17–19)—Satan gets people to believe they are entitled to all their needs without work and even demand the government to pay them for it.

Sex: God created sex to be within marriage and between one man and woman (Genesis 1:28; Malachi 2:15)—Satan perverts this to get people to believe they can do whatever they want with sex.

Clothes: God gave us clothes because of sin (Genesis 3:21)—Satan wants people to believe they can take clothes off whenever they want.

Family: God created the family unit as the backbone of culture (Genesis 2:24; Psalm 78)—Satan does all he can to destroy the family.

We live in a time where many of our political leaders are working to enshrine such perversion into law. It seems to me that many of our political leaders are more concerned about doing all they can to see what evil they can force on people next. They certainly remind me of the people of Noah’s day who God describes this way: “Every intention of the thoughts of his heart was only evil continually” (Genesis 6:5).

As my wife Mally said, we live in a scary time, humanly speaking. We see the perversion of all those items listed above. We even see some of this perversion impacting the church and Christian institutions.

Now such perversion has always been with us, but in the West, this hasn’t dominated culture in the past as it is now. But we have to come to grips with the fact that such things are “normal” in an “abnormal” world, and we live in an abnormal world because of sin.

We are now seeing what was once “masked” “unmasked” as the secular anti-God worldview has become dominant in our culture.

In the Western culture of the past, the Judeo-Christian ethic (that really came out of the Bible) dominated the culture and, to a large degree, masked this perversion. And I believe many in the church were lulled into complacency and did not train and equip generations for the spiritual war raging around us. Sadly, many in those younger generations were captured by the enemy through secular education, compromising churches and colleges, the media, etc. We are now seeing what was once “masked” “unmasked” as the secular anti-God worldview has become dominant in our culture.

That’s why through the ministry of Answers in Genesis, we have spent so much time developing resources to help churches and families equip and raise up as many as they can in the younger generations so we can do what Ephesians 6:13 states: “Therefore take up the whole armor of God, that you may be able to withstand in the evil day, and having done all, to stand firm.”

The Cincinnati Business Courier would rate Answers in Genesis with a zero because of our stand on God’s Word. But that does not mean we are haters! We love all, but we will point out and warn them of their sin and its spiritual consequences, as God tells us to. We will do what God commands us to do—to “judge with right judgment” (John 7:24).

And do you know what this means in this “abnormal” world we live in? “Indeed, all who desire to live a godly life in Christ Jesus will be persecuted” (2 Timothy 3:12).

As we continue to do all these things, standing boldly and uncompromisingly on God’s Word against the forces of evil, I ask that you pray for us often and send a generous donation today. Your gifts support the ministry’s effort to continue its impact in reaching all generations for Christ!

Thank you for standing with us, for your prayers, and your ongoing financial support, which enable us to push forward in proclaiming the truth of God’s Word and the saving gospel to this lost world.