Understanding a World of Beliefs

Our Western nations, many of them once very Christianized, are now very secularized. For Christians, it is instructive to understand the paradox that occurred in this shift: the key role that various religions played in the secularization of Western cultures. It’s more important than ever for Christians to understand these religions (including non-theistic ones) and cults, for many of them have grown in such significance that they have helped the culture lurch into increased secularization. And then armed with this helpful background, Christians can better reach secularized people with biblical truths, especially the saving gospel message.

One religion that has grown in numbers and cultural significance is atheism. Now, why would we even call atheism a religion? AiG points out that as a non-theistic religion, atheism is a belief system that attempts to explain everything in our world, including how the universe came to be and how one should relate to his fellow humans. As such, it’s a naturalistic, comprehensive worldview (as opposed to a supernatural one) often referred to as secular humanism. Generations of our young people, including many in our churches, have been educated in government-run schools in the religious view of naturalism, which in reality is atheism.

Now, the battle between these religions began in Genesis 3, when Adam and Eve had a choice to obey God’s Word or man’s word (“and you will be like God, knowing good and evil,” Genesis 3:5). In an ultimate sense, there are only two religions—one that starts with God’s Word, and all others that really make man god! Those religions built on man’s word take many forms, but whether it’s atheism, Buddhism, Hinduism, Taoism, and so on, all make man god instead of trusting in the Creator God of the Bible. Some of them even mix in aspects of the Bible with their man-centered religion; some (falsely) claim to be built on God’s Word. It is vital that we learn to recognize those religions as being built on man’s fallible word, and become equipped to be able to reach those souls who have been captured by false religions with the truth of God’s Word and the saving gospel.

A variety of manmade religions (whether they believe in a supernatural being or not) have been successful in deceiving people into thinking that their worldview is the only correct belief system and that Christianity, its gospel message, and biblical authority can’t be trusted.

We encourage you to watch an instructive 2:33 video clip of Bodie Hodge, one of the editors of our new book World Religions and Cults, as he explains (in front of our gathered staff) that, ultimately, there are only two kinds of religions. In this brief segment, Bodie also breaks down one of those two categories.

In the preface to World Religions and Cults, Hodge notes that in this series (there will be three volumes) he did not want to “ignore the many secular religions, with their sects and cults, like secular humanism, atheism, and agnosticism.” (Those secular religions will be covered in depth in volume three of the trilogy.)

There have been some older, helpful books, written from a Christian perspective, that have compared the world’s major religions and cults. What makes World Religions and Cults different is that as the book explains the various religions it reveals the impact that beliefs regarding origins have had on these faiths.

All Christians should make it a point to understand the other faiths and learn how to witness to their adherents. This AiG website can help you get a start, such as with this article on Mormonism.

Discerning pastors and parents should be on their guard, for some cults sound like they might be Christian. But as you dig deeper, you will discover that these cults are preaching a message of “works salvation” and are not based on faith alone through Christ alone. Many of these religions acknowledge Jesus, but merely as a wise man or prophet and not God the Son. Other religions are so naturalistic and secular that they may not even believe in a God or Higher Power. 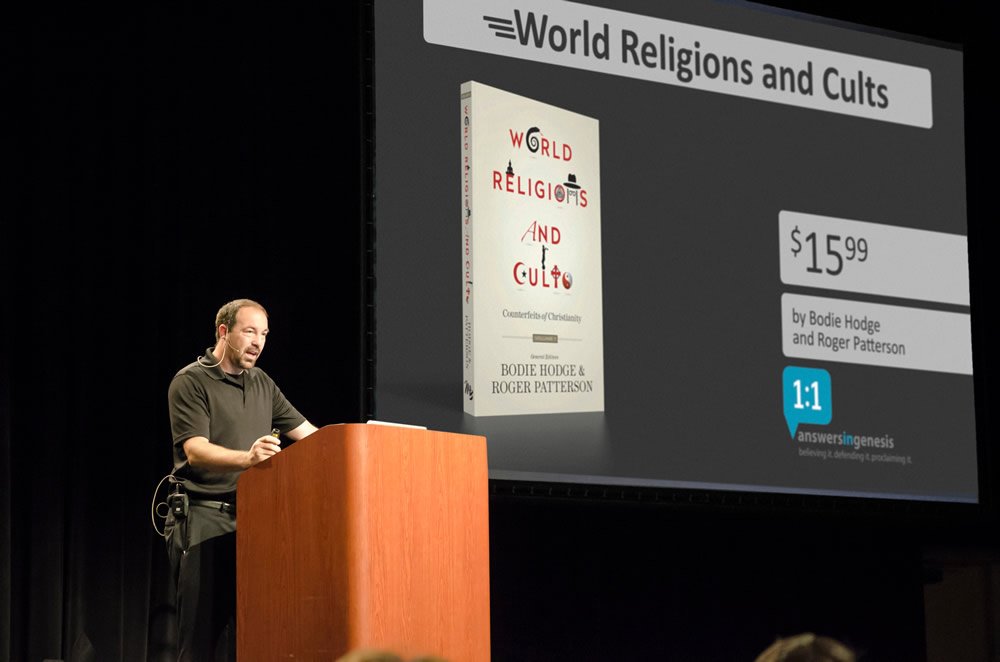 Hodge, with AiG editor and researcher Roger Patterson, worked with many theologians to answer questions that most world religions books don’t cover, such as:

Find out more about this excellent new book World Religions and Cults.