Reasoned or “Reason”: America at the Crossroads

On May 7 this year, to coincide with the National Day of Prayer, the atheistic Freedom from Religion Foundation (FFRF) placed an advertisement (including a shockingly blasphemous cartoon) in the New York Times (partially pictured below). Its purpose was to mock Christianity and promote autonomous human reason—in other words, promote their atheism. 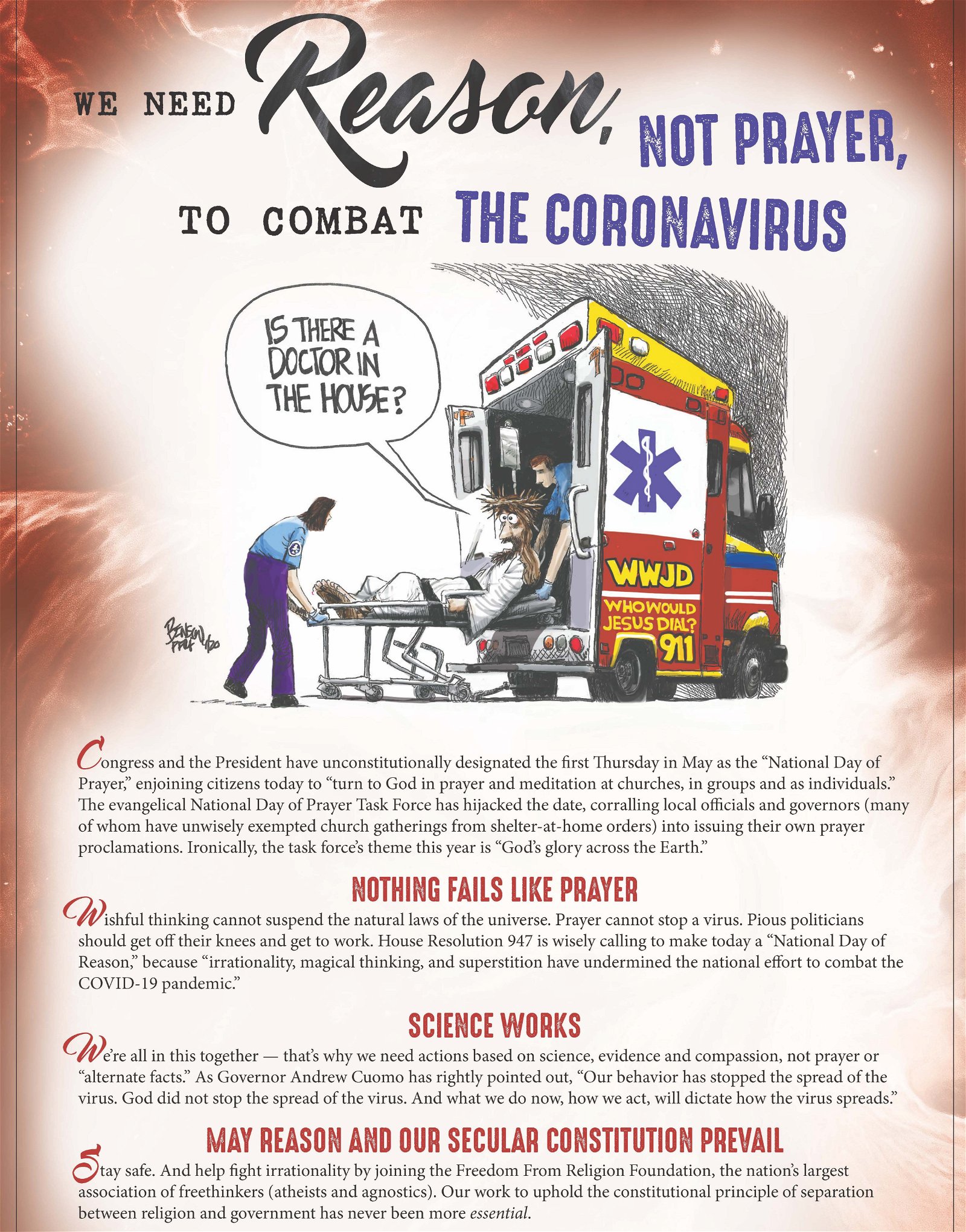 The heading of the anti-Christian group’s advertisement stated, “We need reason, not prayer, to combat the coronavirus.” The rest of the advertisement mocked Christ, mocked prayer, and mocked Christianity. This is the group that’s infamous for bullying city councils and school boards to get any symbols or actions representing Christianity (crosses, nativity scenes, prayer, Bible verses, the Ten Commandments, etc.) removed from as much of the culture as possible. Instead, they want fallible autonomous human reason to govern our lives.

Now if you want to see what happens to cultures that use autonomous human reason as their foundation, consider the Egyptians, Romans, Greeks, and the many others that rose to great heights but totally collapsed because people looked to man for their purpose and meaning in life. Sadly, our Western culture has become governed by this philosophy, and it has resulted in child sacrifice (abortion), sexual perversions, and devaluing of life (euthanasia) as moral relativism wreaks havoc and destroys modern societies as it did great empires of the past.

Sadly, our Western culture has become governed by this philosophy, and it has resulted in child sacrifice (abortion), sexual perversions, and devaluing of life (euthanasia) as moral relativism wreaks havoc and destroys modern societies as it did great empires of the past.

There’s only one answer. It’s not autonomous human reason; rather, it’s doing what the Apostle Paul did: “And Paul went in, as was his custom . . . he reasoned with them from the Scriptures” (Acts 17:2).

The answer is for people to make sure that God’s Word is the foundation for their worldview. The Creator God of the Bible, who is the absolute authority, knows our problem, has provided the solution in Jesus Christ, and has a right to tell us sinful people how we should live and act—that’s the answer for each one of us.

In America, the recent coronavirus situation revealed many people fearful of death and looking to the government for the solution. They wanted human reason to save them. Did human reason save the great Roman empire? No! Christians need to be reasoning from the Scriptures to show others that their only salvation is in Jesus Christ and his infallible Word. But sadly, even many Christians have such a shallow understanding of Scripture that they, too, seemed to have retreated because of this tiny virus instead of standing boldly on the absolute authority of God’s Word.