Given dire predictions by TV host Bill Nye and others that civilization’s future technological progress is endangered by teaching children to doubt evolution, a headline reading “Evolution Inspires More Efficient Solar Cell Design” at first glance appears to support such a position. But on closer inspection, the reader should quickly see that the new solar cell’s development was not based on evolutionary principles at all. 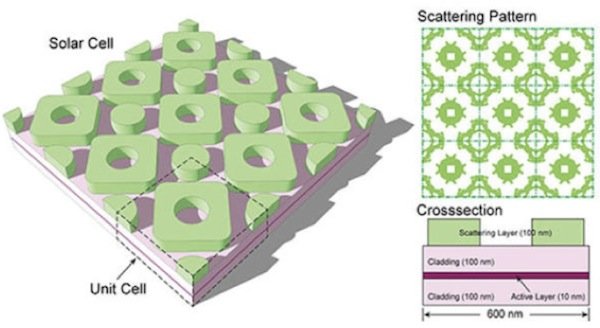 The developers of this new solar cell design—that traps and retains photons more efficiently—credit their application of evolutionary principles to their success. A little scrutiny reveals this innovation would be a far better illustration of the process of intelligent design. Image credit: Northwestern University www.sciencedaily.com

Solar cells capture some of the sun’s virtually limitless supply of clean energy for our use, but current technology is inefficient and expensive. Northwestern University researchers wanted to devise a more efficient solar cell. Their goal was to increase the time photons of light would remain trapped in a solar cell without simply making the solar cell components thicker. The trick was to determine the best combination of materials and design from an almost limitless number of options to achieve that goal.

“Our approach is based on the biologically evolutionary process of survival of the fittest.”

Mechanical engineer Cheng Sun, coauthor of the study “Highly Efficient Light-Trapping Structure Design Inspired By Natural Evolution,”1 says, “We wanted to determine the geometry for the scattering layer that would give us optimal performance. But with so many possibilities, it's difficult to know where to start, so we looked to laws of natural selection to guide us.” Co-investigator Wei Chen adds, “Due to the highly nonlinear and irregular behavior of the system, you must use an intelligent approach to find the optimal solution. Our approach is based on the biologically evolutionary process of survival of the fittest.”

Their computer algorithm sorted through all the possibilities achievable with available design elements and came up with the combination that gave optimal results. This computer software intelligently sorted through combinations to determine by simulated trial and error what would work. The process demonstrated the power of computer technology to evaluate many combinations and options rapidly. But nothing about the process mimics the process of “natural evolution” to which evolutionists attribute the rise of life.

The computer’s operation was intelligent and purposeful, whereas actual evolution would have to be random and purposeless. The computer was given a pre-determined goal to accomplish, a purposeful end toward which to direct its progress. The researchers also supplied the computer with information—all available design elements. Evolution offers no way to explain the origin of information. Furthermore, the computer was also able to interpret the design elements, an analogy to the way cellular mechanisms can read the information in DNA. But evolution offers no way to encode or decode information. Even if a “code” accidentally evolved, evolution could offer no way to read it.

Thus there is nothing about this project that illustrates molecules-to-man evolution. No randomness. No purposelessness. No natural production of new information from chaos. Those who hear Nye’s rhetoric about the necessity of our children accepting evolution to safeguard our technological futures must be careful to use discernment to avoid being deceived by such poor analogies that seem to credit an evolutionary way of thinking with the advancement of technology. Nothing could be farther from the truth.