Were They “Worse Sinners”?

Each year on September 11, Americans recall the horror of the 2001 terrorist attacks against the USA.

Each year on September 11, Americans recall the horror of the 2001 terrorist attacks against the USA that occurred at the two towers of the World Trade Center in New York City and the Pentagon in Washington DC, and also the crashing of a hijacked plane in rural Pennsylvania. In addition, people all over the world will also be reminded today of these four terrible events and the loss of thousands of American lives.

For me personally, it was quite moving when I visited New York City a few years ago and made sure I paid a visit to Ground Zero. Today, two almost-complete skyscrapers and a memorial park stand there as reminders of that tragic day.1 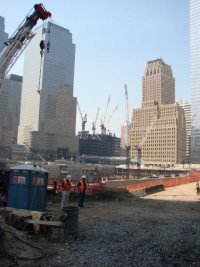 Here is how Ground Zero looked a few years ago when I visited New York City.

On this day in America, we continue to grieve with the nation eleven years after the events of 9/11. Christians in particular should reach out with compassion to the families that are still affected. After all, thousands of our relatives were killed during these terrorist attacks (you see, we are all related to each other because we are all descendants of one man, Adam).

Since 9/11, people have often asked why God would allow such a terrible tragedy that killed “so many innocent people.”

Now, while I do not in any way want to take away from the grievous nature of these horrible events and the devastating impact on so many families and friends, I wanted to take this opportunity to remind us of one of the realities of this life—that all of us will die one day!

In Luke 13, Jesus gave two examples where people were killed in “tragic” events, and both times He asked the question as to whether the victims were “worse sinners” than others. We read the following:

Now, notice something from the passage. The answer Jesus gave was the same for both examples here in Luke 13. He said, “I tell you, no; but unless you repent you will all likewise perish.”

Let’s put it this way. Noting that people were killed by Roman soldiers and by a falling tower, Jesus asked if they were worse sinners and that’s why they died. He answered “no” and then said to “repent.”

In a modern context, we could take this passage and apply it this way: Those people at the World Trade Center, the Pentagon, and Pennsylvania who were killed by the terrorists—were they worse sinners than others? The answer would be, “No, not at all. But you need to repent!”

Digging deeper, we need to understand that every person is a sinner.

For all have sinned and fall short of the glory of God. (Romans 3:23)

This teaching from the Apostle Paul reminds us that there are no “innocent” people, in the sense that everyone is a sinner and therefore accountable to the One we have sinned against—our Creator God. No one is without sin. The Bible makes it clear that all sinners (which means all human beings) are under God’s judgment for sin, and the penalty for sin is death.

Therefore, just as through one man sin entered the world, and death through sin, and thus death spread to all men, because all sinned. (Romans 5:12)

When Jesus spoke during His earthly ministry about those people killed by the soldiers and the falling tower, He was reminding His listeners that they were all sinners. He didn’t say, “Were they sinners?”’ but “Were they worse sinners?” He was reminding people that there is a time for everyone to die. “A time to be born, and a time to die” (Ecclesiastes 3:2). The Bible also makes it clear that “it is appointed for men to die once, but after this the judgment” (Hebrews 9:27).

Because everyone is a sinner, we will all stand before the holy God one day.

Because everyone is a sinner, we will all stand before the holy God one day. But those who have been born again as the Scripture states in Romans 10:9, having confessed with their mouth the Lord Jesus and believed in their heart that God has raised Him from the dead, will be saved for eternity and live forever with their Creator in heaven.

It’s important for us to acknowledge that people perish every day. They die of old age, horrible diseases, catastrophes, and so on. There have been many terrible tragedies in recent years, such as the tsunamis that hit Japan and Indonesia, or hurricanes that devastated various places like the Gulf Coast. Of course, such tragedies are the consequences of our sin and God’s subsequent curse on the creation (Genesis 3:14–19). As Paul tells us in Romans, “For we know that the whole creation groans and labors with birth pangs together until now” (Romans 8:22).

As we observe this 9/11 anniversary, remember the following:

At this time each year, we like to remind people of our free booklet dealing with the “death and suffering” issue, which can be downloaded from our website. We trust you will share this evangelistic booklet with others, so that when people think of terrible times of suffering and death, they can be reminded that they also will succumb to death one day. And yes, this booklet gives the good news of how we can be rescued from what the Bible calls the “second death,” which is eternal separation from God. We can be rescued by receiving the free gift of salvation in Jesus Christ.

I want to share with you a PDF of the booklet that I coauthored right after the tragedy of 9/11 (also available in print from our online store).