“It’s Called Darwinism”: Cruel Note Is the Logical Consequence of the Evolutionary Worldview 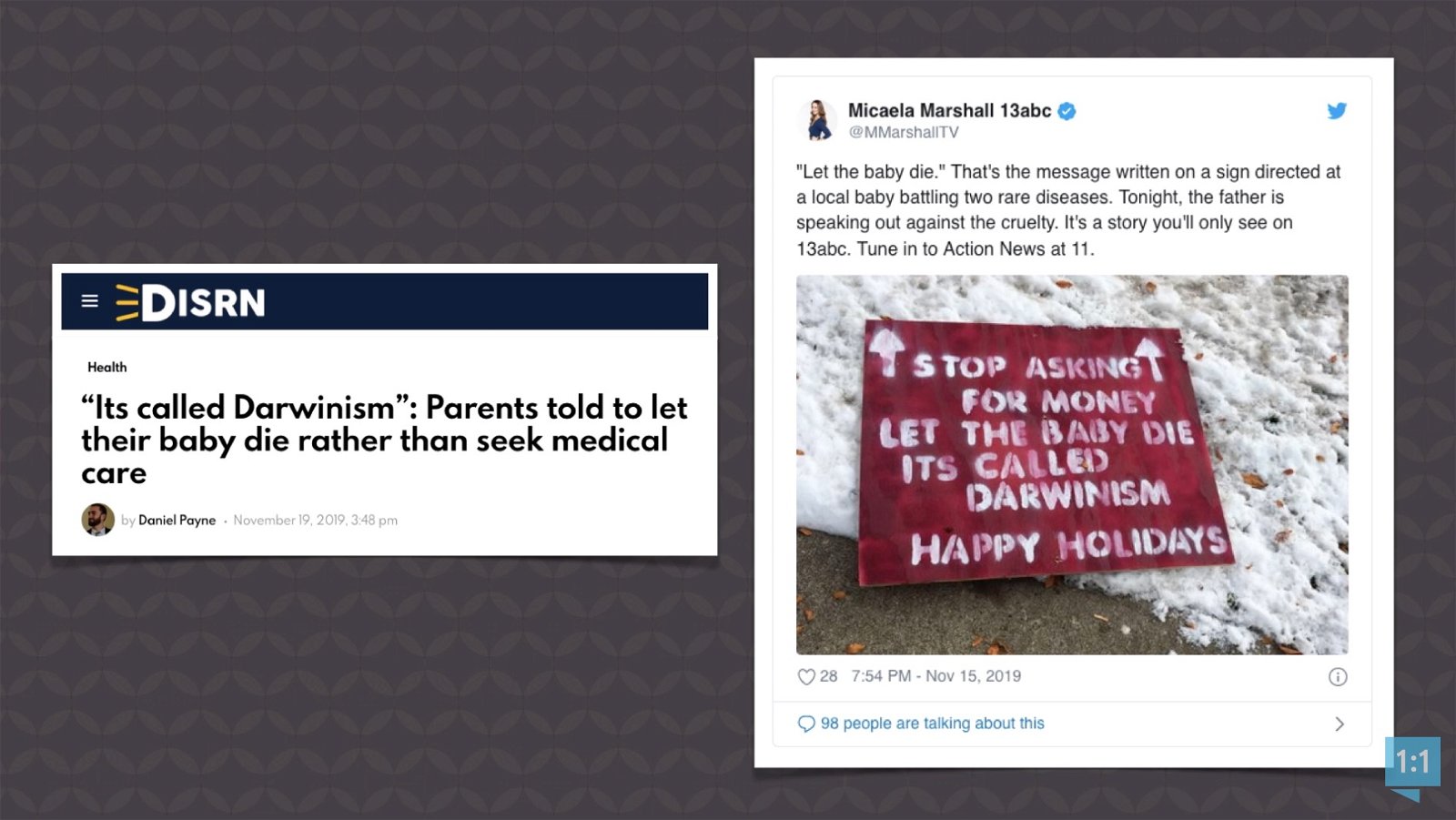 How different are the logical consequences of the biblical worldview and the evolutionary worldview! A recent sign discovered by the parents of a young baby battling two rare disorders highlights the brutality of the underlying philosophy of evolutionary thought. These parents had posted signs advertising a fundraiser they are hosting to raise money for their son’s medical expenses and further treatment. In response, they found spray-painted signs that read, “Stop asking for money. Let the baby die. It’s called Darwinism. Happy Holidays.”

The author of the cruel sign is sadly consistent with his Darwinian beliefs, as have so many before him who took Darwin’s ideas to their logical conclusions.

In the Darwinian philosophy, it’s survival of the fittest—the strong survive to reproduce, the weak die off. In the logic of this worldview, there is no room for compassion, caring for others, and helping the weak survive. The author of the cruel sign is sadly consistent with his Darwinian beliefs, as were so many before him who took Darwin’s ideas to their logical conclusions. For example, here in the United States, thousands of individuals were subjected to forced sterilization by Darwinist-inspired medical staff, so the “unfit” would no longer reproduce children who might have disabilities or have other “undesirable” qualities. It’s horrifying—and it’s the logic of Darwin. Indeed, it’s evolution that these eugenicists appealed to! And remember: such a eugenicist founded Planned Parenthood.

Certainly, not every evolutionist thinks this way—thankfully, most don’t. But they are being inconsistent in not following through with the logical consequences of their belief system (something we’re thankful for, which is a result of the conscience God has given each person). Evolutionists who are not consistent with their beliefs and who rightly condemn such thinking are actually borrowing from a biblical worldview to make that argument.

How very different the biblical worldview is! When we start with God’s Word, we know this precious baby was made in the very image of God (Genesis 1:27), fearfully and wonderfully formed by his Creator (Psalm 139:14). Yet he (like all of us) lives in a broken, sin-cursed world. His body suffers from the effects of the curse. And, until Jesus returns and establishes a new heaven and new earth, we fight against the consequences of the curse, care for the sick and disabled, and show them love and compassion as Christ did throughout his earthly ministry. People with disabilities or disorders have as much right to life and our best care as anyone else simply because they are made in the very image of their Creator.

Ultimate hope is in Jesus Christ!

But the ultimate hope for this baby isn’t in doctors, testing, or the best medical care (although we are thankful for those things, and truly support the parents as they do all they can in using current medical science to help this child!)—it’s in Jesus Christ. Jesus paid the penalty for all our sins. He offers the free gift of eternal life to all. That’s the message this child needs to hear as he grows, and that’s the message his parents, and the individual who left this cruel sign, needs to hear! Ultimate hope is in Jesus Christ!

This item was discussed today on Answers News with cohosts Avery Foley, Dr. Gabriela Haynes, and Bodie Hodge. Answers News is our weekly news program filmed live before a studio audience here at the Creation Museum and broadcast on my Facebook page and the Answers in Genesis Facebook page. We also covered the following intriguing topics: