A Teach-the-Controversy approach is good for education, good for science, and truly better for both sides.

“Using scientific disagreements over topics such as evolution to help students learn more about how science deals with controversy is a valuable part of the learning process,” according to Louisiana’s Central Community School Board member Jim Lloyd. Lloyd is author of the school board’s new policy to provide helpful guidance to teachers who wish to teach about controversial scientific topics such as evolution, global warming, and human cloning. 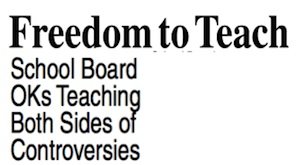 “A ‘Teach-the-Controversy’ approach helps both advocates and critics of evolutionary theory to have a better understanding of the claims of evolution and its supporting evidence,” Lloyd explains. “Teaching this and all subjects objectively means presenting both the scientific evidence for and against each theory.” Louisiana’s ground-breaking 2008 Science Education Act (LSEA) permits teachers to discuss the “strengths and weaknesses of existing scientific theories.” With LSEA Louisiana led the way for other states such as Tennessee to take similar action. (See “The Teacher Protection Academic Freedom Act.”) Local districts were given the freedom to assist their teachers to determine how to use discussion of controversial subjects to build critical thinking skills in their students. Many teachers have expressed a desire for such guidance. As Lloyd recalls:

Not long ago, the Association of Professional Educators of Louisiana polled its members and learned that a large percentage of them welcomed guidance concerning how to better teach controversial science subjects. The following year, Supt. Bob Webber of the Ouachita Parish School System quietly surveyed his own science teachers and learned that 100 percent welcomed some specific guidance on this issue.

That led to a unanimous adoption of the Science Curriculum Policy by the Ouachita school system. The policy passed constitutional scrutiny by the board’s legal counsel, and it has received no legal challenges.

Having determined the same need existed among Central Community’s teachers, the Central Community School Board has now followed the lead of Ouachita Parish School System in pledging to equip its teachers to take advantage of the academic freedom granted them under Louisiana law. Present at the meeting, where the proposal passed 6-0, was a representative of the Ouachita school system with a letter from 20 Ouachita teachers expressing their appreciation for Ouachita’s policy.

Teachers have two reasons to desire guidance in this matter. One is of course their heartfelt desire to equip their students with scientific understanding and discernment. As Lloyd explains, “The President told us, ‘Our quality of science education lags behind that of many other nations,’ and it is important that our science education should distinguish between the data and testable theories of science on the one hand, and unproven philosophical claims made in the name of science on the other hand.”

The Central Community School Board has made it clear that they want their students to receive a premier science education. They recognize that equipping teachers to teach about controversial positions is the best way to do this.

The Central Community School Board has made it clear that they want their students to receive a premier science education. They recognize that equipping teachers to teach about controversial positions is the best way to do this. The school board felt the resolution would be helpful after learning from their teachers that they were hesitant to “teach the controversy” without more direction from the schools. Resources are available, such as those at www.textaddons.com, to help teachers encourage critical thinking about controversial topics. Despite the usual outcry of evolution advocates, this policy is not “creationist code language”2 designed to get teachers to teach creation science to students.

Additionally, teachers wish to remain within the law. “There is false belief that it is unconstitutional to teach criticisms of topics such as evolution, when the Constitution does the opposite. It actually prohibits the censoring of scientific ideas,” Lloyd explains, in reference to our constitutional protection of free speech. “Teaching the controversy is legal and legitimate.” Furthermore, as we discussed in “The Teacher Protection Academic Freedom Act,” “The ACLU and Americans United for the Separation of Church and State both agree that ‘Any genuinely scientific evidence for or against any explanation of life may be taught.’”

Louisiana law and Central Community’s new policy do not require teachers to teach creation science, and we have never suggested public school teachers should be forced to teach creation. Such a policy, besides violating existing law, would be counter-productive: the creation science position would likely be taught poorly by many evolutionary instructors. We are pleased to see Central Community’s willingness to assist its teachers in teaching students how science really works.

All that said, when discussing origins (historical science), we hasten to point out that scientific evidence does not speak for itself. Every person has a bias affecting the way he or she views scientific evidence. Therefore, we exhort Christian parents and churches to re-double their efforts to teach not only critical thinking skills but also the truth of the Bible as God’s Word. Students need to be taught that the Bible is consistent with science both at church and at home even while learning to critique conventional textbook content at school.