“Water—what an amazing molecule!” We’ve all heard about water’s wonders and can probably rattle off a few examples. But H2O conceals other little-known, life-saving secrets. One of them is its ability to resist burning!

“A watched pot never boils.” Perhaps you’ve blurted out that phrase before in frustration. Boiling water seems to take forever, especially when you’re in a hurry to make something simple, such as a cup of hot tea or cocoa.

Why does it take so long? It turns out that water’s slowness to boil is one of its most amazing qualities. This special design points to the handiwork of the Creator, who knew exactly what it would take to sustain life on earth.

Most of us have heard lists of water’s many other astounding properties. It is the only known compound whose solid form (ice) floats above the liquid form, enabling fish and other life in rivers and lakes to survive the long winter without freezing solid. It is also the earth’s “universal dissolver,” moving and recycling vital chemicals and nutrients, carrying them to the plants and animals that need them. Water even dissolves oxygen from the air and brings it to the creatures in the sea.

Those benefits are obvious. But what could water’s slowness to boil possibly have to do with keeping us alive?

Water has a relatively high heat capacity. Heat capacity refers to the amount of heat it takes to change something’s temperature. Compared to most other things we cook, a pot of water on the stove takes a long time before the water feels any warmer, even on high. Why? In order to get the pot of water any hotter, it must absorb a lot of heat.

The same is true in the reverse. The higher the heat capacity, the longer it takes to make the material colder. This is why a carton of cream will cool off in the refrigerator faster than a bottle of water. The cream has a lower heat capacity than water.

This explains why ice chests don’t require electricity. Very little ice must melt in order to cool off other objects, which lose their heat more quickly. Hurrah for a high heat capacity!

But other than convenience, why is it so important for water’s heat capacity to be high? Because it protects the life on this planet from certain death.

Unlike other planets in the solar system, the earth experiences little difference in temperature between night and day. At nightfall, the temperature typically drops around 20–30 degrees. On Mars, temperatures can swing 180°F (100°C) in a single day. While much of this is due to its thin atmosphere, another factor is the lack of water on Mars.

The oceans, rivers, and lakes help regulate the temperature on the earth. They can hold onto and release large amounts of heat without significantly changing temperature themselves. Large bodies of water moderate the effects of a heat wave or cold snap, so that the effects aren’t too drastic. The water all over the planet’s surface even keeps the seasons and long-term climate from shifting too quickly, so that plants and animals have more time to adapt.

You can observe the moderating effects of water at coastal cities or near large lakes. The temperature is fairly consistent, with changes occurring gradually. The interior towns of a state like Oregon can have much colder winters and hotter summers than towns located next to the ocean.

Our earthly dependence on water for survival is a daily reminder of an infinitely greater need. H2O can sustain us for another day on earth, but it cannot save us from the coming fiery judgment for our sin. Only Jesus Christ, the Way, the Truth, and the Life can cleanse our sins, free us from the penalty we deserve, and grant eternal life. He calls out, “Let him who thirsts come. Whoever desires, let him take the water of life freely” (Revelation 22:17).

Can water really keep things from getting too hot or too cold? Try this experiment to find out! 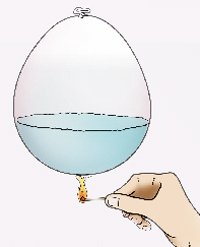 A candle, matches or a lighter, two rubber balloons, water

Here’s another experiment you can try, if you can’t use an open flame. Will ice melt faster floating in water or exposed to the open air? 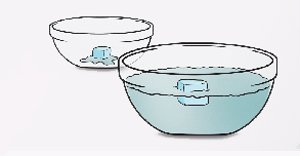