Experiment: How to Make Water Climb a Tree

How do you make water flow upward? It’s not a problem if you’re the Creator of the universe.

American poet Joyce Kilmer famously penned the words, “I think that I shall never see a poem lovely as a tree.” While Kilmer marveled at the external wonders of trees—and God adorned them with plenty—some real “poetry in motion” happens on the inside. That’s where our Creator made a way for water to defy gravity, flowing upward to nourish leaves hundreds of feet above the ground.

Most of the time we experience the downward force of water. Rain pours from clouds, waterfalls gush over rocky cliffs into pools below, and spilled drinks splatter off the table and soak the carpet. Put simply: water flows downward. But when you take a paper towel to that water you spilled, suddenly you’ve flipped things around—and the water goes up.

While we take for granted that towels can absorb our messes, why does this happen? Yes, the water moves from the floor up into the cotton or paper fibers. But it’s not mainly because of properties in the fibers themselves—despite what paper towel commercials say. Rather, water is sticky.

The bent V-shape of water molecules (H2O) gives them something of a split personality. One end has a positive charge, and the other end a negative. In the same way that the negative side of one magnet attracts the positive side of another magnet, two water molecules cling together through hydrogen bonding. This clinginess gives water some unique characteristics that work together to draw water into the leaves of trees.

For one thing, the surface of water contracts as all the molecules pull together. This creates tension, which allows some objects to float above the water like they’re resting on a tight mesh. Also, the bonding that makes water molecules adhere to each other (cohesion) also makes them stick to most containers (adhesion). That’s why it’s so hard to get those last drops out of your glass.

So, what do you get when you combine water’s surface tension and its adhesive qualities? Capillary action, or the ability of water to “climb.”

Now, let’s be clear. Water can’t just scale a mountain. After all, gravity is good at its job, keeping oceans and lakes in place and making sure your drink doesn’t crawl out of your cup. But if you put water in a narrow enough container, something incredible happens.

Perhaps you’ve seen this effect with a straw or tube. The smaller the tube’s diameter, the more the water will rise. Those sticky water molecules grab on to one another and to the sides of the tube and hoist themselves up. It’s something like a chain reaction.

The same thing happens when towels sop up the spills. The molecules latch onto each other and flow up into the fibers (it’s almost as if capillary action does the cleanup work for you—almost). Empty spaces in sponges also produce capillary action that absorbs a great deal of water, and sports fabrics designed to wick away sweat rely on this effect.

Capillary action also gives trees and other plants a boost in drawing nutrient-rich water from the soil up the stem and into the leaves. The small tubes in plants (called their vascular system) help water molecules move up.

Its power is greatly multiplied when you factor in transpiration—the evaporation of water from the leaves and stems of plants. As water evaporates, it creates something of a vacuum that helps draw up more water to replace what escaped. Transpiration creates the vacuum, but the cohesion keeps the water molecules linked in a chain that is strong enough to withstand the pull of gravity and not break.

Such forces help explain why the largest living tree on Earth, the California redwood, can tickle the sky at up to 379 feet (116 m), and still haul up minerals from soil to leaf. (See the experiment for how you can watch this happen on a smaller scale.)

Given the “gravity busting” ability of capillary action, Kilmer’s poem ends appropriately: “Poems are made by fools like me, but only God can make a tree.” Genesis 1 makes a brief reference to God’s creation of water and plants, which may not impress a casual reader, but the more we study the details, the more our appreciation for our Creator’s majesty keeps on growing. 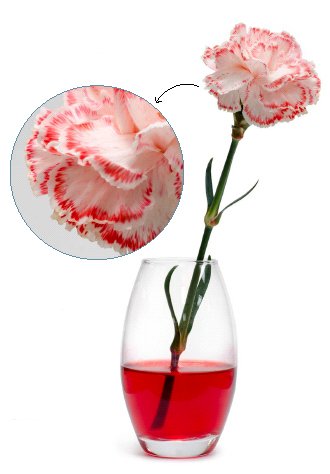 You don’t have to cut open a tree to see capillary action; it can take place right on your kitchen counter. But to observe it, you’ll need some patience and adult help.

Pour the ½ cup of water into the glass or vase.

Put about 20 drops of food coloring into the water.

Get an adult to cut the stems of the carnations at a 45º angle. Be careful not to crush the stems with a dull knife or scissors.

Use the stems of your carnations to stir the dye into the water.

Take a picture of the flowers so that you can check the progress later. Leave your flowers in the dyed water.

Note the changes you see.

Other Things to Try

Try adding more dye to your water. How does that change the results?

Use celery instead of carnations. Does celery work the same way?

Split the stem of an undyed carnation down the middle. Put one half in red dye and one half in blue die. What happens to the petals?