Ken Ham was honored, and his Answers in Genesis staff acknowledged, by Bryan College on Saturday as the AiG president picked up an honorary doctor of science degree at the school’s commencement. The college, located in Dayton, Tennessee, where the famous “trial of the century”—the Scopes “monkey trial” of 1925—played out, made note of Ham’s “courageous proclamation of the truths of Scripture.” Bryan College also gave a nod to AiG’s superb research staff, noting that its “work is used by thousands of churches and schools to give evidence to the compatibility of science and the Scripture.” One of AiG’s popular speakers and writers, Bryan Osborne, is a graduate of Bryan College. 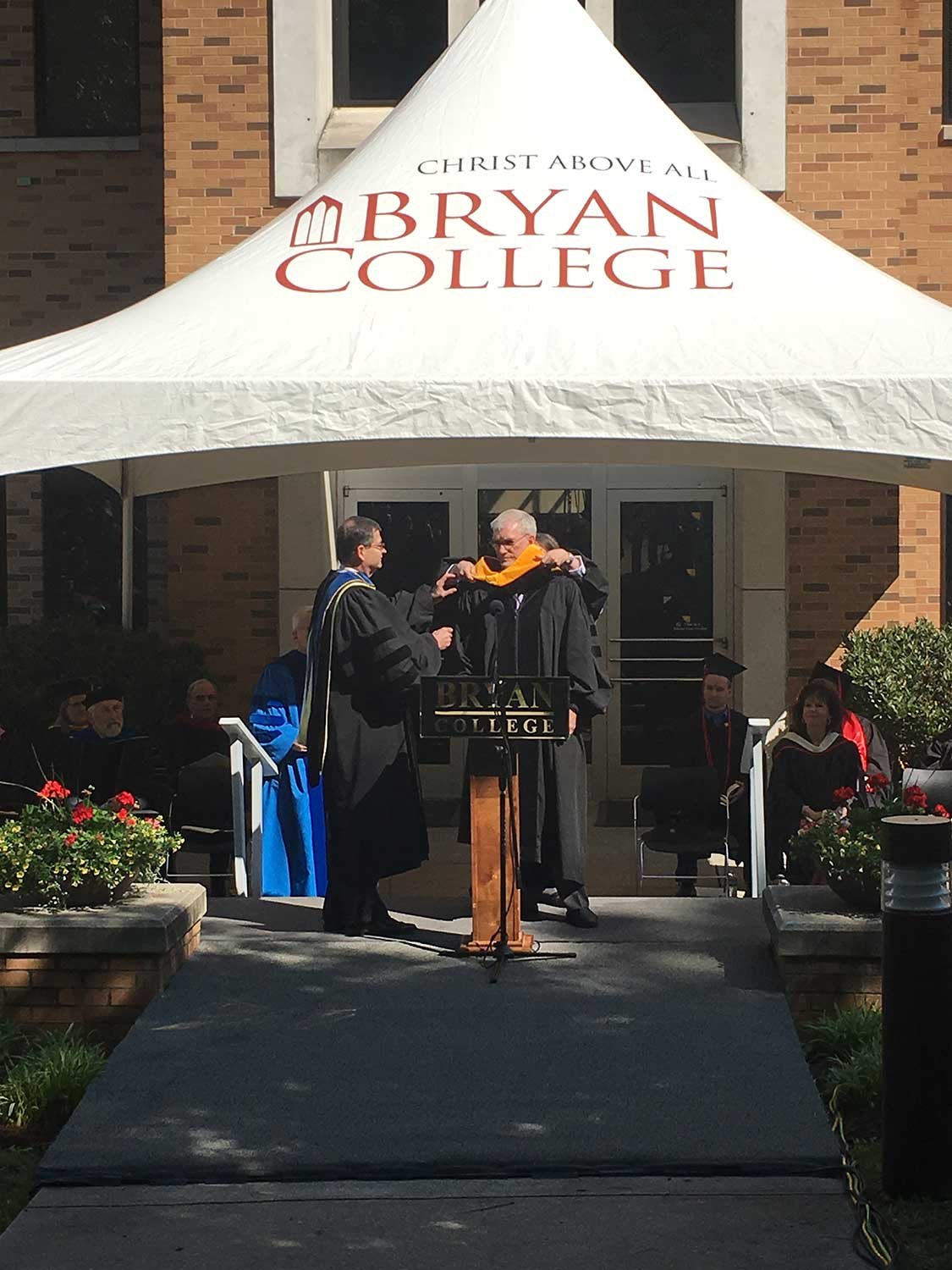 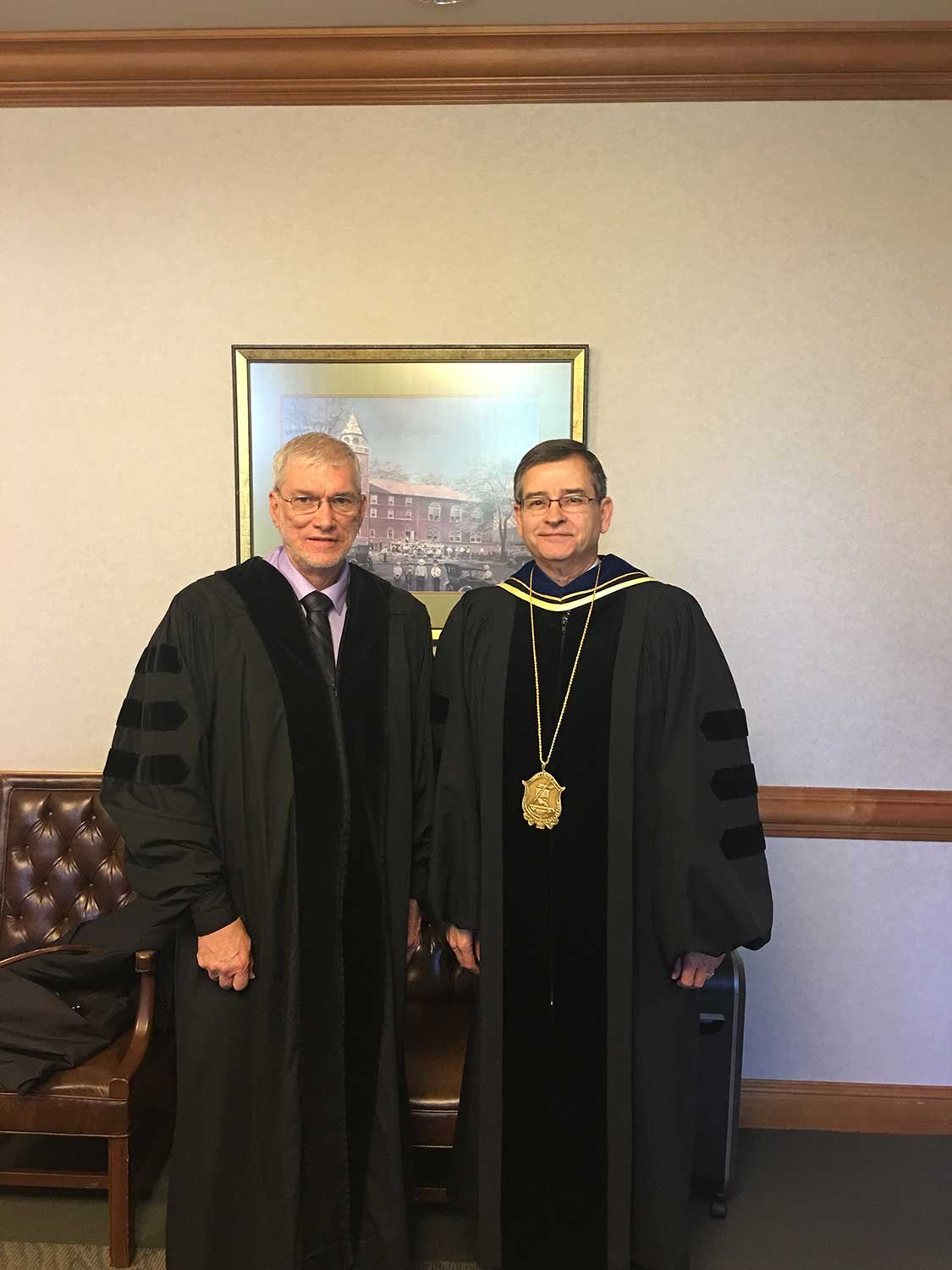 It is an honor for me to present to Ken Ham the honorary degree, doctor of science.

As founder and president of Answers in Genesis, he has made and continues to make significant contributions to science and education, both in the Christian academy and the academy at large. Founder of the Creation Museum, builder of the full-size Noah’s Ark, Dr. Ham is best described as a visionary who is successful in making dreams become a reality. He has conducted interviews with CBS News Sunday Morning, NBC Nightly News with Brian Williams, PBS News Hour with Jim Lehrer, Fox, BBC television, and a host of other media. He has written numerous books and hosts a daily radio program, Answers with Ken Ham. He is a busy man!

In a day when most of the culture and, sadly, many Christians proclaim a naturalistic worldview, Ken Ham boldly and persuasively argues for a biblical understanding of “In the beginning God.”

The Scripture tells us that God created the universe, this world, and all that inhabit it for his glory. It tells us that mankind was made in his image, and all creation is a grace that he has given to everyone to the end that they may know him. Indeed the Scripture claims that if mankind will not acknowledge and praise him, the rocks will cry out as a testimony to who he is. And the rocks of creation do indeed tell of his glory.

The science education conducted by the research staff of Answers in Genesis gives testimony to the biblical account of creation. Their work is used by thousands of churches and schools to give evidence to the compatibility of science and the Scripture. The work of Answers in Genesis is a wonderful resource for every Christian parent and student, with the ultimate aim to proclaim the gospel of the saving grace of Jesus Christ. It is fitting for Bryan College to give honor to Dr. Ham for his courageous proclamation of the truths of Scripture and encouragement to the body of Christ.

One of the marks I admire most in leaders is humility. Dr. Ham is a courageous yet humble man. I have witnessed him patiently interact with eight-year-old children and kindly address the questions (or shall I say bombardment) of a cynical press. I consider him to be the foremost authority in the world for biblical creationism, a friend of Bryan College, and a friend of those who love the Lord Jesus Christ.

He, like Noah, has built an ark for the purpose of saving souls.

By proclamation of the Board of Trustees and with the authority invested in me, it is a privilege for Bryan College to bestow the degree, doctor of science on Ken Ham.

The doctorate degree is Ham’s fifth such honorary designation.

Find out more about President Livesay and Bryan College at http://www.bryan.edu/administration. The college can be found on AiG’s list of creationist colleges.

In a town where in 1925 the media portrayed Christianity in a negative light and paraded evolution as science, it was fitting that Dayton-based Bryan College would bestow a degree on a man who has spent his life proclaiming that empirical science does not support molecules-to-man evolution, and that God’s Word is true, starting with Genesis.