Taking Back the Temples

How did it happen? How did museums become the secular temples of our day?

As Christians, we should counter the museums’ clever stories with truth.

I’ve been to a lot of museums, and I like to watch the people, especially families. As they enter a museum, you will often notice that they fold their hands reverently and sometimes speak to each other in hushed tones. Parents corral their children so they do not bump any of the “sacred” objects on display.

As the family approaches an exhibit, junior will tug on his dad’s sleeve and ask, “Dad, what is this?” Then, Dad, not wanting to appear ignorant, will turn around and read the sign. 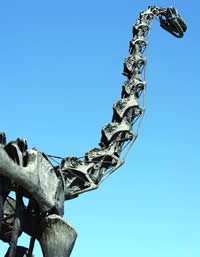 Dinosaurs are some of the favorite displays in museums. But beware of the authoritative-sounding signs that claim these creatures are millions of years old. According to the Bible, they are only thousands of years old, since they were created on Day 6 of Creation Week.

“Well, Son, this here’s a dinosaur. Yeah, that’s what I’d say it is. And (reading the sign again) it’s been extinct about 65 million years.”

The entire family then usually stands in awe as they stare at the display’s magnificence.

Museums are the churches of our culture—places where people are encouraged to worship and serve “the creature rather than the Creator, who is blessed forever” (Romans 1:25, NKJV). Science museums across the world reinforce the teachings behind the idea of evolution, which are also promulgated in public schools and throughout the media.

The Smithsonian National Museum of Natural History is one of the most popular museums in the United States, with more than 5.4 million visitors in 2005.1

High Priests of the Culture

Museum curators are now the high priests of this culture, the gatekeepers to the doors of these houses of worship, through which millions of the faithful pass each week. In the May 2006 edition of Discover magazine, John McCarter, CEO and president of the Field Museum in Chicago, commented on the increased attention that creation science and the intelligent design movement are receiving.

When asked how museums should respond, McCarter said, “You can counteract that by telling stories.”

Then asked if museums are becoming advocates for a particular viewpoint of scientific thought, McCarter replied, “I don’t think I’d call it advocacy. Again, I call it storytelling.”

When asked, however, “What is the harm in telling the other story [the story of creation]?” McCarter responded, “I don’t think there is any harm, as long as it is not posed as a scientific alternative to the story of evolution. The mainstream theological community is already way beyond the literal interpretation of the biblical accounts of Adam and Eve and the Garden of Eden and seven days of creation. Instead, they are saying that those are wonderful stories, created 2,000 years ago by people who were trying to explain their world, not that they are scientific fact.”2

The evolutionary message will most likely reach the monkey and ape exhibit. You may see the gorilla portrayed as a distant relative to man.

Over the past 20 years, I, along with others from B.C. Tours (an organization that offers Christian families, schools, and churches the opportunity to experience the reliability of the Bible through tours of secular museums and zoos), have taken thousands of students and adults through museums around the United States and taught creation in these temples of evolution. We take the museum exhibits and their evolutionary stories, and we teach creation. It drives the museum staff crazy.

Our guides counter the museum guides’ clever stories with truth. 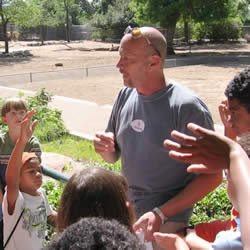 Bill Jack of B.C. Tours takes groups through museums, zoos, and national parks and presents the truth behind the claims of evolution.

Rather than cowering in the corners of our padded pews, Christians must engage the culture in the conversation of origins. Where better to do that than in their temples, just as Paul did in Athens?

Having done this for several years in museums and zoos nationwide, I have had many people who were not with my group come up, listen, and thank me for speaking the truth. Some have even approached me to engage in conversation, and some have even trusted Christ right there in the heart of these secular temples.

Of course, I have had others, including museum personnel, take exception to what I say. In the Boston Museum of Science, as I addressed a group of homeschool students, a solemn-looking man in a suit came up and stood next to me. After I finished my presentation, I turned and introduced myself. He identified himself as the chief of security and demanded I leave. I respectfully replied, “If you want me to go, call the police.” With a puzzled look on his face, he and the security guards accompanying him turned and walked away, never to be seen throughout the remainder of my hour-plus visit. Not only does truth trump story, but civil liberty trumps tyranny.

Paul understood the need to use creation in the public discourse. I believe Christians must increasingly exercise their free speech and turn what is common in the culture, such as museums, into pulpits. Let’s turn these secular temples of our day into opportunities for ministry.

Bill Jack is faculty advisor for Worldview Academy, a Christian Leadership Training Program designed to train Christians to think and live in accord with a biblical worldview. He and his wife, Tabby, live in Castle Rock, CO, and have three children.

Learn how you can take what is common in the culture and turn it into a pulpit by visiting www.bctours.org and www.worldview.org.

Be Prepared with Good Questions

Whether preparing for a trip to the museum, zoo, or a national park, you should equip yourself to combat the evolutionary teaching that permeates these facilities.

First, understand what to look and listen for throughout the exhibits and during the tours. Look out for references to millions or billions of years, evolutionary relationships between animals, and key words like apemen, transitional forms, and big bang. They all point to evolutionary philosophies and teachings, which contradict God’s Word.

If you take a guided tour, ask the guide simple questions that expose his or her beliefs about the origins of life. Some questions could include: “What do you mean by that?” “How do you know that to be true?” and “Were you there?”

When signs explain an exhibit by stating evolutionary teaching as fact, you should ask yourself “Is that true?” and “How did they come to that conclusion?” These types of questions allow you to examine an area to make sure it is true. Write down your questions and research them when you return home. Visit websites that explain what you saw on your trip from a biblical perspective.

To find answers to your questions about evolutionary teaching, visit Answers.