Dr. Andrew A. Snelling, one of the world’s most respected creation scientists specializing in geological studies, has joined Answers in Genesis as the organization’s new director of research. This announcement comes on the heels of the ministry’s Creation Museum grand opening just three weeks ago. 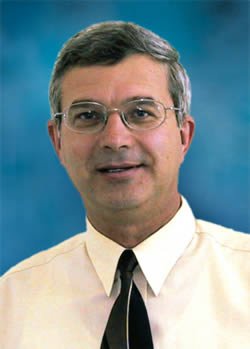 The addition of Dr. Snelling confirms AiG’s continued efforts to meet the highest standards in its research in creation studies, according to AiG President Ken Ham. “Dr. Snelling’s stature among the scientific community should be an unequivocal sign to the academic world and the media that serious research is being conducted at AiG and its museum,” Ham said.

Since it opened its doors to museum charter members and media last month and then held a grand opening on Memorial Day (May 28), AiG has garnered international attention for its 60,000-square-foot, high-tech museum, and has drawn more than 30,000 visitors so far.

In years past, AiG has relied on outside, part-time consultants in geologic studies to ensure that the museum’s extensive exhibits were accurate. Dr. Snelling, who spent considerable time serving as a consultant in developing the museum’s large flood-geology room, becomes AiG’s first full-time Ph.D. in the field of geology and joins a staff of four other Ph.D. researchers who come from an array of academic disciplines. Dr. Snelling earned his doctorate in geology from the University of Sydney in Australia.

Dr. Snelling has extensive experience working in the mining industry in Australia. One of his main areas of research has been the study of methods used in dating rocks, a key area of research for groups like AiG, which see strong evidence for a recent creation.

Dr. Snelling’s research has demonstrated that a global flood more than 4,300 years ago explains most rock layers and fossil deposits found around the world.

Dr. Snelling’s research has demonstrated that a global flood more than 4,300 years ago explains most rock layers and fossil deposits found around the world. Building from this foundation, Dr. Snelling has made predictions as to what should be found if a catastrophic global flood actually happened (e.g., the existence of extensive rock layers).

Technical papers by Dr. Snelling on metamorphism and rock dating have won the prestigious “Technical Excellence Award” as best technical paper at both the 1994 and 1998 “International Conference on Creationism” respectively.

In the mid 1980s, Dr. Snelling worked for Ken Ham before Ken moved to the US. Since late 1998, Dr. Snelling has been a professor of geology at the Institute for Creation Research near San Diego, California, though still living in Brisbane, Australia. He has just finished the first draft of a major new book on the Genesis Flood. Dr. Snelling will still reside in Australia, with lengthy regular visits to AiG’s northern Kentucky/Cincinnati area offices and elsewhere as needed. His first US visit on behalf of AiG, along with his wife Kym, a teacher in a Christian elementary school, will be June 24–August 7. The couple also has three adult children.

“We are ecstatic to have someone of Dr. Snelling’s caliber to oversee research projects, write science articles, and also give occasional lectures at the museum and at other venues on behalf of AiG and the Creation Museum,” Ham said. “A gifted communicator, Dr. Snelling is just as effective speaking to a lay audience, as he is to a group of academic peers.”

Some articles by Dr. Snelling: