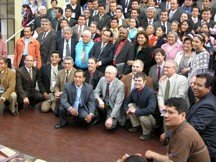 A “few” attendees wanted their picture with the speakers.

To the delight and encouragement of hundreds of scientists, pastors, teachers, students, and others, Lima, Peru, was recently host to the Second Latin America Conference on Creationism (II Congresso Latinamericano de Creationismo) from November 3–7, 2008. A host of speakers, including two from Answers in Genesis–U.S., participated in the congress.

The event was held at a centralized church (Iglesia Alianza Cristiana y Misionera, Miraflores) close to the center of Lima, a city of about 9 million people. The congress was hosted by Centro Creacionista Latinamericano Canopy, the Latin American division of Canopy Ministries of the United States, run by long time friend and adjunct speaker, Jim Gardner. And the week was packed!

The Peru-based ministry is led by Creous and Elizabeth Ramdath, who recently took part in the AiG Worldwide international training seminar held at AiG–U.S. headquarters early in the year.

There were also several guest devotionals and musical pieces throughout the conference. To expand the message, the event was further sponsored by a Spanish language television network. Bethel TV recorded the main sessions and broadcast them to millions in Latin America, as well as interviews with the speakers. And a highlight for me was meeting some wonderful translators, pastors, and volunteers who worked so diligently.

In addition to our presentations at the main conference, universities and other churches were also on the schedule. I spoke to engineering students plus a large church (La Vid Iglesia) in the city of Cusco (the former capital of the Incan Empire). Dr Crandall also spoke at a seminary and a large youth rally. When it was all said and done, we spoke over 20 times in seven days. Other speakers were just as busy.

How Was the Message Received?

The creation-gospel message had a tremendous reception. Entire groups of people asked questions between sessions about Genesis, creation, and evolution. The questions were the same ones we receive from all over the world: Cain’s Wife What Really Happened to the Dinosaurs? Ancient Biblical Lifespans: Did Adam Live Over 900 Years? How Old Is the Earth?

Most of the questions they asked are answered in the New Answers Books 1 and 2, which is why we need them translated into Spanish as soon as possible (and every English-speaking Christian should have them too). The Latin American people were extremely open and even excited about the message. The people of Peru and other Spanish speaking nations who were represented at the conference long for answers to the issues of life that the evolutionary worldview simply cannot satisfy.

One elderly gentleman told me that there was a question that had bothered him for most of his life, but he finally had the answer. It had to do with genetics and why people look so different.

On another occasion, one pastor said that someone had brought up an alleged contradiction in the Bible years earlier, and he didn’t know how to answer it. He had nagging doubts about the Bible ever since. He said that in Exodus, one of the plagues destroyed the livestock and horses, but later the Pharaoh attacked Moses with his army who were on horses. To teach a particular point, I said, “Let’s turn to the Bible, and see what it says” (because that is the first place we should look):

Exodus 9:3
“Behold, the hand of the LORD will be on your cattle in the field, on the horses, on the donkeys, on the camels, on the oxen, and on the sheep—a very severe pestilence.”

Exodus 14:9
So the Egyptians pursued them, all the horses and chariots of Pharaoh, his horsemen and his army, and overtook them camping by the sea beside Pi Hahiroth, before Baal Zephon.

I pointed out that the Bible actually says the plague only destroyed the horses in the field, and not those kept with Pharaoh, which were probably kept in a special facility. This pastor was overjoyed at this point. The Bible can be trusted!

There were many, many other conversations and panel questions, but hopefully you see the vital importance of creation ministries such as Answer in Genesis, Canopy Ministries, and others in providing a questioning world with the life-changing answers they desperately seek.

The greatest joy of the trip, though, was seeing many people surrender their lives to the Lord. After one talk in particular to young adults, nearly 35 people came to know Christ. The Lord was doing great things and to Him be the glory in all of this.

Being in Peru, a science speaker and Bible teacher such as myself simply can’t pass up the opportunity to see some of the sights of this ancient landscape and culture. When one thinks of Peru, they usually think of the Incas and the remote mountain top city of Machu Picchu. There is also the immense foundational walls of Sachsaywaman and the Nazca lines (geoglyphs) in the desert. Visiting these in person and discussing them with others were highlights of the trip.

Just to whet your appetite, here are few pictures of archaeological finds in Peru. In the future more articles will come to the AiG website regarding ancient cultures, a whale graveyard, dragons, and much more.

An outreach such as this helps by providing answers and encouragement that are simply unavailable (in any practical way) to these non-English-speaking peoples. If you feel led to help continue to be involved in missionary outreaches like this, please continue to pray for us and also consider supporting the ministry. May you always be blessed in Christ.