About 400 people (a huge number by UK standards for an intensive teaching conference on a Bible topic) heard four days of lectures by eleven of the world’s leading creation speakers.

Over two years in the planning (and after much prayer), we believe this event held in Derbyshire, England will be looked back upon by creation/evolution observers as a turning point in the history of the creation movement in the UK/Europe.

Media outlets such as The London Times, The Guardian, The Daily Mail, BBC Radio 5 Live, an independent television crew from Germany and The Church Times newspaper interviewed various speakers and participants for possible news stories. 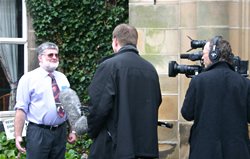 Dr. Monty White, one of the conference speakers, was interviewed at the meeting by a German TV crew.

There is no doubt the Creator God of the universe is raising up creation organizations and activists across the world. Attendees from outside England made comments such as:

We want to give you one thrilling example of what the Lord is doing across the world. We met a young pastor from Bulgaria. This young man told us he was brought up in a home where one of his parents belonged to the Russian Orthodox Church, and one was a Roman Catholic. He said while in university (about 12 years ago), he was struggling with what life was all about—he wanted answers. He came across a book on biblical apologetics that helped him know that he could trust the Bible, and he was converted.

This young man, however, still struggled with evolution and the Bible’s account of origins. Shortly after being converted, someone gave him a copy of The Lie—Evolution [by the co-author of this article, Ken Ham]. After reading the book, he became very excited and wrote to the USA address of AiG inside the book, asking for more information. But he explained he had no money. (He informed us that at the time, the average wage in Bulgaria was less than $250 a month.)

Mike Zovath (AiG’s VP in charge of the Creation Museum project) responded and sent this young man a number of books at no charge. The Bulgarian said that he devoured the books, and then started to witness to people on the creation/evolution issue. He began to pray how he could get involved in getting this information to people and to somehow be involved with Answers in Genesis.

He further explained that Bulgaria had been a communist country (controlled by Russia) until the 1990s. After coming out of communism, people were hungry for answers as to what life is all about. This young man quickly discovered that when he presented his Christian faith by starting with the book of Genesis, people (e.g., Gypsies, Jews, atheists, etc.) listened and some were saved.

The young man went to a Bible college for training. The church he attended had planted a new church, and the church leaders asked him to be its pastor.

About five years ago, I [Dr. Monty White] traveled to Bulgaria, and this young man (by now a pastor) was asked to interpret for me. He was a phenomenal interpreter, as he had read the basic creation books. It was so exciting to find this very proficient and knowledgeable creationist in this country.

After this speaking tour, the Bulgarian pastor began translating various AiG resources in the Bulgarian language. AiG–UK financed the printing of material in the country itself, and this pastor has been distributing resources to people across the country.

This on-fire creationist pastor lives on very little money in a small apartment, with a wife and two children. He told us he is now influencing other Christian leaders to use the “creation evangelism” approach, as it is so successful.

At this time in Bulgaria’s history, the schools are now wide open for creationist teaching. The pastor told both of us that he gave a video he got from AiG (and personally translated into Bulgarian) to a schoolteacher. She showed it to her students, who were so interested, that the principal said he wanted this shown to all the grade 11 classes in this government school. The teacher then asked for more creation resources for the school! 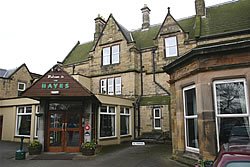 The Hayes Conference Center in England is located on 100 beautiful acres.

There are about 1,200 Christian churches in Bulgaria, and most pastors/church work is heavily financed by Christians in America. AiG–UK (with the help of an individual in the USA) paid all the costs to bring this pastor to the conference we just concluded in England to help train him further for his creation ministry in Bulgaria.

This pastor, by the way, has become known in Bulgaria as the person to contact for creation teaching/resources. And … he pleaded for us to travel to Bulgaria to run a major creation conference.

This is the testimony of just one of the attendees at this historic UK conference. We heard many other testimonies as to how the Lord has led people to AiG so they can be creation evangelists in their own country.

For example, one person from a group from Holland told us that when they were converted and came across material that helped them to know they had to believe in a literal Genesis, they couldn’t find anyone in the church (or any minister) who believed Genesis like this. So they were there at the conference, on fire now to spread the creation message.

At the same time this conference was held, there were many newspaper articles (and other media reports) in the UK dealing with the creation/evolution issue. As is so in America, creation/evolution has been front-page news in the UK. One newspaper article that appeared on the third day of the conference reported on a scientist (who is a member of the Royal Society of Chemistry) who said that evolution should be taught as fact to all school students in the UK. 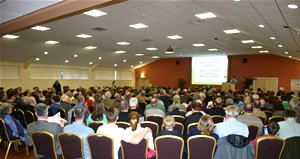 This exciting international conference was one of the best-attended in-depth creation meetings ever held in England.

After the conference ended, one of us [Dr. Monty White] observed, “There is no doubt this was a ‘mountain-top’ experience, and an historic event that I believe will take the AiG–UK ministry to a whole new level of activity. I’m excited to continue stepping out in faith to saturate all of Europe, that is so dead spiritually, with the creation/gospel message, so that people will be saved and will challenge the culture to return to the authority of God’s Word.”

By the way, the participants were very excited to learn more about the Creation Museum being built by AiG–USA. Many said they were eager to come over and visit as soon as it was open. They are thrilled to see something like this taking on the secular establishment. A number asked how they could be a part of even building a similar museum for Europe. Meanwhile, one individual gave a $900 donation to the USA Creation Museum!

Let’s pray for AiG–UK, that the Lord will continue to mightily bless this ministry (located in Darwin’s homeland) as it begins a new era of activity to defend the Christian faith and uphold the authority of God’s Word.