Dr Emil Silvestru is a prominent geologist, and one of the world's leading experts in the geology of caves. 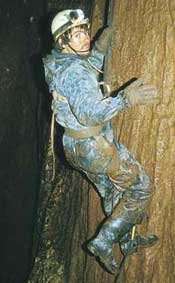 No, he doesn’t live in a cave. And no, Answers in Genesis does not believe in primitive subhuman “cave men.”

Dr Emil Silvestru is a prominent geologist, and one of the world’s leading experts in the geology of caves. Formerly of Romania, he recently joined the staff of AiG-Canada.

Dr Silvestru’s field of expertise is speleology (the study of caves)1 and karstology (the study of karst lands).2 Until recently he was the head scientist at the world’s first speleological institute (Emil Racovitza Speleological Institute, founded in 1920) in Cluj, Romania. What’s most amazing about this respected geologist is not his love for caves and danger, but his firm faith in the authority of God’s Word-including the Genesis account of creation.

Emil is an explorer, writer and lecturer, with over 30 years of experience in climbing and spelunking. Fluent in English, he has captivated audiences across Europe with his messages upholding Biblical authority. Last spring he completed a 3,000-mile lecture tour of Romania, speaking on creation versus evolution. The driving passion behind his work is to confirm that the Bible can be trusted from its very first verse.

Dr Silvestru is also a respected researcher, having published 30 scientific papers. His most recent paper addresses the “riddle of paleokarsts”-“ancient” landscapes characterized by sinkholes, caves and underground drainage, where erosion no longer occurs.3 Geologists often point to paleokarsts as evidence against a young Earth, but Dr Silvestru has shown that the Biblical framework makes much more sense of the evidence.

Why the interest in caves?

Born in a small Transylvanian town in 1954, Emil Silvestru grew up in the shadowy world of postwar communist Romania. From the age of 12, he was fascinated by the numerous caves and other karst features in his region, which led to his career in geology.

Dr Silvestru earned his Ph.D in karst sedimentology at Babes-Bolyai University in Cluj, Transylvania. At first he accepted the atheistic dogma of his Communist teachers. But he began attending the Baptist church of his wife, Flory (a former track star on Romania’s national team, now a physiotherapist). “Through my scientific work,” he says, “I came to realize that the order, beauty and sense of fine humor with which the world is built cannot possibly come from chaos and randomness-I was sure there was a Designer.” Five close encounters with death eventually led him to faith in the God that his wife professed.

After becoming a Christian he realized that the “millions of years” interpretation, so common in geology, was not compatible with Genesis. After much study, he realized that caves could have formed with amazing speed, given the aftereffects of a worldwide Flood. “That doesn’t mean that there are not still some unanswered problems,” he says, “but researching such issues is what being a scientist is all about.”

Since 1997, AiG has helped to finance Emil’s hands-on research in Europe. But the economic hardships of his depressed, former Communist country led him to seek refuge in the West, where he can provide for his family more easily. They recently emigrated to Ontario, Canada. Now on staff at AiG-Canada, he will continue doing research and writing, while also serving as a seminar lecturer. Dr Silvestru is currently translating AiG’s popular Answers Book into Romanian. Already, his translations of two AiG booklets-Dinosaurs and the Bible and Is there really a God?-have been widely distributed throughout his native country.

Dr Silvestru’s greatest heartache is that, after his lectures in Europe, “people often approach me asking where they can find more information on some of the topics I cover.” But the materials just aren’t available. Please pray for Dr Silvestru’s transition into a new culture, and pray for his ongoing research, seminars and translation responsibilities.

See an interview with Dr Silvestru in Creation magazine