This article was intended to mock the creationist position and create alarm about teaching creation in Australian schools.

As a long-term staff member and speaker with Answers in Genesis (AiG), I am indebted to Garry Linnell and the Good Weekend magazine supplement for the five-page colour feature about our recent Sydney Supercamp/Conference (“God’s Classroom”, Good Weekend section, Sydney Morning Herald, February 24, 2001). I realize of course, that the article was intended to mock the creationist position and create alarm about teaching creation in Australian schools. Having been there all week, I wonder how the article could have passed the code of ethics for professional journalists to “report and interpret honestly, striving for accuracy, [and] fairness….” The parodies and photos also seem to have disregarded the requirement not to “place unnecessary emphasis on personal characteristics, including … religious belief….”

Despite its apparent harmful intent, the Sydney Morning Herald has given us tens of thousands of dollars of free advertising in one of Australia’s largest weekend newspapers. Not to mention that it also appeared in Melbourne’s The Age. Being an organization supported by the sacrificial giving of ordinary people, there is no way, even in our wildest dreams, we could even consider affording such a spread. God certainly works in mysterious ways.

We are also indebted to Mr Linnell for pointing out that those at the (AiG) conference at Merroo in January were from all walks of life, young and old, including “teachers and doctors and many other learned people.” This is in contradiction to the usual humanistic media ooze that creationists are an uneducated lot, holding to their (as they would say) unscientific ideas, purely because of lack of knowledge. Linnell even admits (shock horror!) that there were Doctors (i.e. of science) there! In fact, there were about a dozen scientists giving lectures, and many more in the audience.

Warwick Armstrong making a point in his talk

Mr Linnell also comments that “even their children were quiet and studious.” For this I personally apologize, tongue firmly planted in cheek. Maybe for the next major conference (January 2004—book now) we should import children more in line with the often rude, noisy and inattentive rabble which teachers face on a daily basis, in the State humanism/evolutionism-soaked “education” system. This ill behaviour stems from the humanistic “I have my rights—you can’t tell me what to do—if it feels good do it” mentality which has derailed our young, turning many of them into antagonistic, undisciplined social misfits who sadly have a youth suicide rate which is the second highest in the world!

I also thank Mr Linnell for pointing out that there were 850 people there for the week, 650 of whom were accommodated for the whole period. Had there been more beds, then those waiting for a place would have taken them gladly. We will probably need even more beds for the 2004 conference, especially with the free publicity the Good Weekend has given us. At the moment there is no comparable centre in Australia big enough to accommodate those who want to hear this life-changing, faith-building message. This of course flies in the face of the usual media misinformation, which implies that those who accept the historical reality of the book of Genesis, are a small unimportant, uneducated segment of the Christian pie. Very few Christian conferences in Australia have 650 people living in for a week. 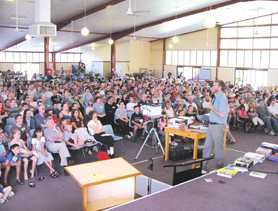 Archbishop Hollingworth is quoted as saying “Creationists have a lot of money and they are very smart.” Having worked full-time for Answers in Genesis for the past ten years, I have yet to see much of this money. Having come from the business world, I am aware of the wages and conditions which exist there. Many people in AiG are working for a third (or less) of what they would receive in secular jobs. Further, as we travel throughout Australia and the world doing our talks we are mostly billeted with supporters, gladly accepting whatever (free) accommodation is available. Conversely, evolutionists seem to have access to limitless funds, ultimately coerced from taxpayers, to promulgate their religion.

You may remember Archbishop Hollingworth as the one who wrote the foreword to the anti-Christian book Telling Lies For God, by Australian Humanist of the Year (1995), Ian Plimer, which has been amply discredited on both scientific and ethical grounds. We were later informed that Plimer gloated that Archbishop Hollingworth hadn’t even read the book before writing the foreword! 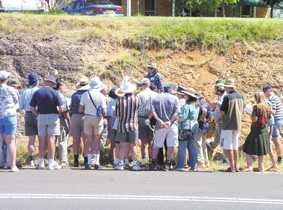 As a sometime-photographer, I was tickled to see that the Good Weekend photography was just as tilted as the story. See Peter Sparrow on page 18, and Ken Ham on page 21. Both these gentlemen were photographed from below, for a peculiar effect. To belittle, photograph from above; to make them larger-than-life monsters, photograph from below! Also, the shot of Dr Carl Wieland on page 21 is a curious one, taken from the front with a strange shadow to his right. Obviously special skill was needed with the flash to achieve such a distorted shadow? Dr Tas Walker reports that the photographer was crawling around on the ground at the geology site, apparently after a further distorted photo.

Why do I say the story is tilted? Just look at the structured sarcasm/ridicule of us poor misdirected souls who would take God at His word, then see the cut to the predictable anti-Biblical “theology expert”. Such “experts” are mostly too blind to see that the humanist journalists are using them in just the same way as Lenin cultivated “useful idiots” in the West, i.e. to undermine their own system!

Then back to the ridicule. Am I offended or discouraged by the ridicule? No, exactly the opposite! I am encouraged by it, immensely. Ridicule of your opponents” argument is the obvious admission that you have nothing of value to say! Look at that which is tendered as scientific evidence by our astute journalist friend:

“…the eye has evolved independently more than 40 times within the animal kingdom … conservative computer modelling [has shown] that it will take less than half a million years for a working eye to develop.”

Science, as scientists tell us, is based upon that which we can observe and test now. Can we run an experiment to show an actual eye evolving? No, of course not. The above is speculation, not empirical science. What is really meant is:

“Different types of animals have different types of eyes which cannot be explained by a common ancestor. Of course, a Designer is not science by definition, even if all the evidence supports it. The only alternative is evolution. Therefore the eye must have evolved independently many times. The proof is the fact that there are so many independently evolved eyes!”

The piece about the computer program is tendered as if it has something to do with actual, real-time evolution, when it is in fact a program designed with intelligence, into which acceptable results are predetermined.

One of the “experts” is the above-mentioned humanist (and mining geologist), Ian Plimer of Telling Lies For God “fame”. Plimer is quoted as saying “it’s so tragic that there are scoundrels around seducing people into believing that the planet is a very simple place. It isn’t. It’s incredibly complicated.” I have no idea to whom the mercurial Ian refers, as creationists as a group give glory to God our Creator who has, by His amazing power and forethought, created a most complex universe. A complexity with which our feeble minds have yet to seriously grapple. Maybe that was a misquote?

It should not pass without comment that not one of those to whom Mr Linnell turns for support were at the conference. The lack of relevance and accuracy of their comments reflects this fact.

We are further indebted to Mr Linnell for advising his readership that AiG has a Web site which attracts up to 11,000 visitors each day, a Web site that, as he says, has been in the top one percent world-wide.

My pleasure in reading his article has also been based on the reality that attack and ridicule have always brought us increased support, and so much of that new support from the “learned people” to whom Mr Linnell refers. Plimer’s book stimulated a measurable jump in support for AiG. Maybe it’s time for a new effort, Ian (as was promised some time ago)? Much of this new support came from dedicated Christians who came to know about us via such crude attempts at ridicule.

Many realize that those the humanists attack with such desperate tactics must pose the most serious threat to the humanist religion. With good reason, humanists are worried that we’re “stealing their flock!”

Conversely, humanists are generally not in the least threatened by churches that compromise the Word of God. Remember the hysterical intolerance displayed by humanists against the rezoning for the proposed AiG Creation Museum in the USA? Some of them said they wouldn’t mind if AiG were building a church, but this museum will teach people that the Bible is actually true and can be trusted!

One Anglican minister told me that Plimer’s book woke him up to the fact that AiG is an organization which defends the authority of God’s Word, at a time when many sections of the church are co-habiting with the anti-God religion of evolutionism. Presumably the Good Weekend article will do the same for others.