Worldwide AiG Translations Ahead of Schedule

I have a 9-year-old granddaughter visiting us who is extremely organized and never wants to be late for any event. She has her own schedule, and single-handedly she keeps her family on that schedule.

At AiG WorldWide we also have a schedule for the translations of our AiG–USA creation materials. In fact, four months ago we set a schedule to have AiG materials in the translation pipeline in 100 different languages within one year. At the time, some thought that to be an overly aggressive goal.

A mere four months later, however, AiG WorldWide has just made arrangements for our 70th language translation. That’s 70 different languages! We believe these translations will impact millions of lives for Christ and greatly encourage other ministries and churches all over the world.

These translations include all of the traditional European languages as well as Hindi, Tamil, Arabic, Hebrew, Turkish and Burmese. The global Christian community has responded to us with great enthusiasm to this enlarged missionary outreach of AiG. 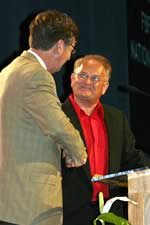 AiG’s Dr. David Crandall was honored recently by the General Association of Regular Baptist Churches (GARBC) at their national conference.

Until late last year, Dr. Crandall headed Gospel Literature Services (GLS)—an outreach of the GARBC, which had become one of the largest translation and distribution networks of Christian literature in the world.

As he was heading into retirement, Dr. Crandall had been training someone at GLS to take over his position. At the same time, God was giving him a clear calling to set up AiG–USA’s worldwide ministry before he fully retired.

Dr. Crandall, over the last 12 years, has taken Gospel Literature Services to great heights of ministry around the world and we know that he will do the same thing at Answers in Genesis.

The audience expressed its appreciation with an extended period of applause.

Many national pastors and missionaries are telling us stories about the onslaught of evolution in their countries. From Africa to Asia and Europe to South America, Christians tell us how their government-run schools and research facilities—and the media—have almost universally accepted and promoted evolutionary thought.

So when AiG WorldWide became a reality there was a global “AMEN” from Christians in many corners around the globe who have wanted to be able to defend their faith and give credible answers.

Interestingly, the strict standards we have set for translations have been greeted with delight. For example, we require that every translation include at least five translators—and three of them must be “mother-tongue” speakers. We want all the translations to be the best possible, so that the message will be clear, accurate and honoring to our Creator.

The most-requested book for translations

Around the world, the most requested book to be translated is Ken Ham’s challenging book The Lie. One pastor in Thailand is preaching a series of messages to his people using that book as his source. By the way, Tim Dudley, president of Master Books, said The Lie has been one of the biggest-selling creation books, with about one-half million in print in the English language alone. It stands alongside The Genesis Flood (by Drs. Morris and Whitcomb) and The Genesis Record (by Dr. Henry Morris) as one of the most influential and most published creation books in the history of the modern creationist movement.

AiG–USA has resources available that can launch a major creation movement all across the world. With God’s help, we want to make that happen.

AiG WorldWide staff recently met with two Chinese pastors who said that the People’s Republic of China currently has over 90 million believers. In order to meet the needs of these believers, we now have Chinese translation teams translating AiG materials. These two men had the opportunity of meeting with Ken Ham and sharing with him their burden of reaching the Chinese for Christ. Ken assured these men of AiG’s complete support.

Poised to impact the world

The AiG ministry has taken the Matthew 28 mandate literally. We feel compelled to share God’s Truth around the world. In fact, I believe there is no other ministry in the world that is poised to impact the world with creation truths and the message of biblical authority like AiG–USA.

AiG is prepared to come alongside church-planting movements around the globe and provide them with free teaching tools to train their people. In fact, almost every people group can be reached effectively by starting with the doctrine of creation and a Creator God.

AiG has always been a ministry intensely involved in evangelism, and we believe the AiG WorldWide ministry will result in thousands coming to Christ. In our offices, we pray daily for the world of missions, and especially for the persecuted church and its people.

Our media translation ministry is multifaceted. We translate not only written text but also DVDs and radio programs. In August, AiG WorldWide will send a video team to accompany Ken to Mexico to film six of his talks (with an excellent Spanish translation to assist). These videos will then be provided free of charge throughout the Spanish-speaking world.

Many of Ken’s radio broadcasts have already been translated into Arabic, and will soon be playing on the first Christian radio station established in Baghdad, Iraq. These same broadcasts will also be sent by satellite all across the Arabic-speaking world.

Ken shared with me this week that he and the entire staff are praising the Lord that He is allowing us this wonderful opportunity of facilitating ministry throughout the world.