AiG-USA's newest scientist, astrophysicist Dr. Jason Lisle, appeared in his first live TV program yesterday … and it was a significant one.

AiG-USA’s newest scientist, astrophysicist Dr. Jason Lisle, appeared in his first live TV program yesterday … and it was a significant one. 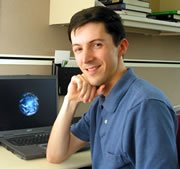 A national US audience watched Dr. Lisle debate well-known anti-creationist Dr. Eugenie Scott on CNN-TV's “Paula Zahn NOW” program, Monday evening, November 29. The live debate was quickly arranged after the release of a CBS-TV/New York Times poll which revealed that 65% of Americans believe that both creation and evolution should be taught in public schools. (For AiG’s perspective on how origins should be presented in schools, read the last paragraphs of Poll by Liberal Group Reveals: Americans Want Creation in Public Schools!)

Dr. Lisle, who holds a Ph.D. in astrophysics and has recently become a full-time speaker and researcher with Answers in Genesis–USA, exhibited a pleasant, but confident, demeanor as he debated evolutionist Dr. Scott of the innocent-sounding National Center for Science Education (which is really a vehement anti-creationist group). Twice she interrupted Dr. Lisle as he was speaking, and she also defended censorship (i.e., not wanting to allow science teachers to criticize evolution in schools).

In the interview, host Paula Zahn noted Dr. Lisle’s scientific credentials, which helped deflect the impression given on the CNN website (and in the set-up piece that preceded the debate) that the creation/evolution controversy was only about religion vs. science. When Dr. Scott stated dogmatically that there is no data to support creation, Dr. Lisle cited the scientific research of creationist Dr. D. Russell Humphreys of ICR on magnetic fields and its relationship to the creation model of earth history. (For more, see Evidence for a Young World.)

At the same time, Dr. Lisle was unapologetic about his beliefs when he declared that the real issue about origins is this: are you for God's Word or against it? It was a good way to summarize AiG’s mission to proclaim biblical authority.

AiG does not have permission to archive the program as a video on our website, but it is possible that www.CNN.com may archive the video on its site. Also, a free transcript is available of this program at http://transcripts.cnn.com/TRANSCRIPTS/0411/29/pzn.01.html. See below for the transcript of the debate.

To find out more about Dr. Lisle’s background and his work on AiG’s planetarium (inside the future Creation Museum near Cincinnati), read our recent web article about him.

Paula ZAHN (moderator): Joining me now to debate this: Eugenie Scott, director of the National Center for Science Education. She joins us from San Francisco tonight. And from Cincinnati, Jason Lisle. He has a Ph.D. in astrophysics and works with a pro-creationism group called Answers in Genesis.

Welcome, both of you.

Jason, let’s start with you tonight. If you were to teach creationism in a classroom, what would you teach?

Jason LISLE, Answers in Genesis: Well, I would show that the scientific evidence, when you understand it, is consistent with what the Bible has to say about creation.

If I had the—if I had the legal right to talk about the Bible, I would use that. If I didn’t, I would at least show that the evidence is consistent with there being a creator, with design.

ZAHN: So Eugenie, how would you explain that?

The way evolution is taught at the university level is the way it should be taught at the high school level. And that’s really what we’re talking about here. It’s not between evolution and science.

ZAHN: What do you mean by that?

SCOTT: At the university level, which is where I used to teach, we teach evolution, biological evolution, as the inference that living things had common ancestors. And we teach it neutrally. We don’t teach it that God did it or God had nothing to do with it. We just present the science.

And that’s what should be done at the high school level.

ZAHN: Jason, I want to share with you a result from the latest CBS/New York Times poll, which shows that 65 percent of those people polled were in favor of teaching both creation and evolution in public school classrooms. Do you appreciate these numbers?

LISLE: I do. I think that a lot of people realize that it would be very smart to teach both creation and evolution if that were possible. Because …

ZAHN: So you don’t have a problem with both being taught side by side?

ZAHN: What about the argument Eugenie made that you can teach it in a more neutral way, and I’ll let you expand on that in a moment, Eugenie?

LISLE: Well, there’s no neutral ground, is there? I mean, you’re ultimately either for what God has said as word or against it. And that’s what the real issue is here.

SCOTT: No, we’re treating this as if there are two alternatives, evolution, and the institute, or the Answers in Genesis version of creation.

But you know, his version of creation, which is everything was created all at one time in six days, 10,000 years ago, is not what Catholics believe. It’s not what Episcopalians believe, and it’s certainly not what Hopi believe or what Navajo believes. So you can’t say teach both, because there’s more than two alternatives.

Now my view, the view that the National Center for Science Education takes, is that we should know more about a lot of creationisms, plural. But it has no place in science class. I think comparative religion is a wonderful study, and we should be more theologically literate than we are. But keep it out of science class, because it is not scientifically demonstrable.

ZAHN: So Jason, would you support the idea of moving that into a religion class?

LISLE: I have no problem with creation, evolution being taught in a religion class, as well. But it would be nice if the scientific aspects of the creation models, just the idea that there is an intelligent creator, would be brought up in a science classroom.

There’s scientific evidence supporting that position. I mean, is the evolution model so weak that its adherents feel the need to suppress any alternatives?

ZAHN: Eugenie, there’s a lot of, you know, strong words that are used when it comes to this debate that creationism is actually being censored out of the curriculum.

SCOTT: Of course. It’s being censored out of the science curriculum, because, contrary to the claims that have just been made, there are no scientific data supporting it.

You know, the thing is, scientists and teachers aren’t trying to get creationism into this—into the curriculum. It’s the politicians. And what this has done is politicize science education in a very negative fashion.

ZAHN: Well, Jason’s a scientist. He’s trying to get it into the curriculum.

SCOTT: Make your argument to the scientific community.

LISLE: A real scientist would not squelch the evidence.

LISLE: But see, I find it interesting that evolutionists would try to use political pressure to suppress certain ideas. For example Russ Humphreys, he’s a Ph.D. nuclear physicist, and he has a model of how magnetic fields work. It’s based on their being created 6,000 years ago. And he’s able to actually predict the magnetic fields of the planets Uranus and Neptune based on creation.

And yet, most students will never hear about that, because we’re not allowed.

SCOTT: And there’s—and there’s a very good reason for that.

ZAHN: All right, Eugenie, you get the last word tonight in the debate. The very good reason for that is what, Eugenie?

SCOTT: The very good reason for that is that he has to fool around with some constants that completely violate the laws of physics, which is why these arguments are not made in the scientific literature. They’re made—they’re made politically at the local school board. And that’s not the place for them.

ZAHN: Eugenie Scott, Jason Lisle, thank you for educating us tonight. Appreciate it.

SCOTT: Thank you for asking us.