An Astronomical Leap in Creation

An astrophysicist with a PhD from the University of Colorado at Boulder, Dr. Lisle will help AiG refute the evolutionary account of origins—using his strong science background.

Yes, almost all practicing astronomers and astrophysicists believe in the big bang, a billions-of-years-old universe and other evolutionary ideas. But based on Scripture and the best interpretation of the scientific evidence, they are all simply wrong.

That’s the view of Dr. Jason Lisle, AiG-USA’s newest speaker and researcher. An astrophysicist with a PhD from the University of Colorado at Boulder, Dr. Lisle will help AiG (and the creation movement as a whole) refute the evolutionary account of origins-using his strong science background. He will also help design exciting planetarium programs for the future Creation Museum in Northern Kentucky (see drawing). 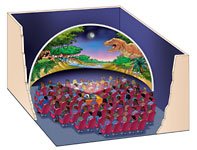 Housed in AiG’s Creation Museum complex, which is still under construction, the new planetarium may open in 2005.

Dr. Lisle is not the stereotypical “egg-head” research scientist who has difficulty communicating at a layman’s level. He has developed, for example, an excellent, well-illustrated talk on the topic of “The Relevance of Creation.” This Bible-upholding talk is even suitable for Sunday morning services.

So if you live in the USA, why not become one of the first in the country to host Dr. Lisle, either for a Sunday service or an evening program for the community-or have him do both (perhaps talks on biblical authority and Genesis, and the other on the fascinating topic of astronomy).

Call Steven Fazekas at ext. 438 (1-800-350-3232) for information on hosting this excellent, young speaker, who is available to speak this fall throughout North America. 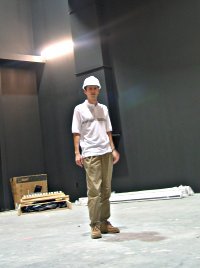 Dr. Lisle inside the planetarium being built by AiG in Northern Kentucky and near Cincinnati.

Now residing in Northern Kentucky, Dr. Lisle lives just a few miles from the border of his state of birth, Ohio. He grew up in a Christian home, and because his family believed in the authority and accuracy of the Bible, he had little difficulty in dealing with the evolutionary bombardment he received in school.

At the university level, Jason discovered that an important element in scientific study and the drawing of conclusions was this: scientists usually are not aware of their presuppositions, that is, they interpret scientific evidence in light of their existing worldview. It thus made it easier for him to see that intelligent scientists, many who were his professors, can disagree on what the evidence really means, for they have different starting points. So as he read creation materials, he could see that when the evidence was properly interpreted, it always supported the biblical account of creation.

In graduate school, Dr. Lisle developed a passion to share the message that God’s Word is true from the very first verse. He began giving talks encouraging people to trust in the Bible and not compromise with the secular ideas of millions of years of evolution.

Dr. Lisle has always had a keen interest in science and enjoys reading books on a wide range of scientific topics. Astronomy and physics have always been areas of special interest. One of his favorite hobbies is viewing the beautiful night sky through a telescope.

In graduate school, Dr. Lisle specialized in solar astrophysics. His areas of interest in creation studies are in developing models of cosmology and stellar aging. Creationist thinking in these areas is still very preliminary.

More of his educational background