A Tribute to a Pioneer

Not only was Professor (“Prof”) John Rendle-Short a world-reknowned researcher, he was also dedicated to the creation-gospel message.

A Christian who interprets the Bible literally has no problem. He understands that man was created from actual dust which you could run through your fingers. I have an elderly friend who believes just that. “But John, dear,” she says, “God can do anything. What’s the difficulty?” Indeed, what is the difficulty? But for many Christians this is a major problem; need it be so? (p. 15).

He wrote a pediatric textbook that is still being used today.

This professor pioneered research into autism.

He was given the great honor of being made a “Member of the Order of Australia.”

This man was a professor in Child Health at the University of Queensland Australia for 24 years.

And he was a six-literal-day, young-earth creationist!

Regardless of what some naysayers might claim, you can be a biblical creationist and receive world recognition for great research! Professor John Rendle-Short (or “Prof” as we all affectionately called him) passed into the presence of his Savior on January 21. Prof was the founding chairman of the board of directors for the Australian creation ministry that started in our home in the late 1970s, known as the “Creation Science Foundation” (CSF).

Prof had emigrated from England to Australia, but he always maintained a deep love and burden for his native country. For example, he pleaded with me (nearly thirty years ago) to travel to England and help reach the English church and the nation with the creation/gospel message. This resulted in the founding of an affiliated CSF ministry in that country, which later changed its name to “Answers in Genesis” when it became a sister organization of our Answers in Genesis ministry in the U.S.

On my first trip to the U.S. in the early ‘80s, Prof came with me. We met with Dr. Henry Morris and Dr. Duane Gish at the Institute for Creation Research in San Diego. I still have many fond memories of that trip and the tremendous bond of friendship Prof and I developed. 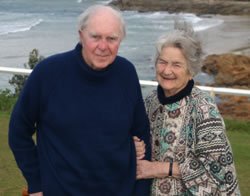 Although last month’s write-up in an Australian newspaper about Prof’s death (see below) mentioned that he authored many books, most of its readers would have been unaware that he authored one of the first major books published by our Creation Science Foundation entitled Man: Ape or Image? This book particularly dealt with the topic of theistic evolution and why a Christian cannot consistently believe in both evolution and the Bible. In his early years, Prof himself was an ardent theistic evolutionist; however, after meeting the biblical creationist and scientist, the late Dr. A. E. Wilder-Smith, and being challenged by him concerning the Genesis account of six literal days of creation, Prof changed his position. He became an ardent six-literal-day, young-earth creationist.

After Mally, our children, and I moved to the U.S., we kept in close contact with Prof and his dear wife Angel (who was also a medical doctor). Prof and I were to conduct a number of speaking tours together in England, and Prof also spoke for the CSF ministry all across Australia. After Prof and Angel retired, they moved to the Sunshine Coast, north of Brisbane, Queensland, and eventually moved into a retirement home. Each year that Mally and I visited Australia, we would make a special effort to drive up to the North Coast and visit them. 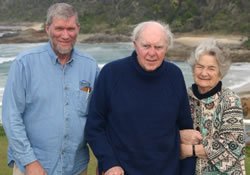 The last time we saw Prof and Angel, Mally and I picked them up at their retirement home and brought them to the beach. Here is a photograph from that memorable day.

The next year, Angel passed into the presence of the Lord. Then on January 21 of this year, Prof joined her.

We certainly will miss Prof and Angel—they were such dear friends. Most people in the creationist movement never really knew just how much time Prof. put into helping the creation ministry that started in our home in Australia, which would eventually reach millions of people around the world with the vital creation/gospel message. Yet we praise the Lord that we know we’ll see Prof and Angel again—when there will be no more aging or sickness—and even no need for a creation ministry, for those who have received the gift of salvation will be in the presence of our Creator. 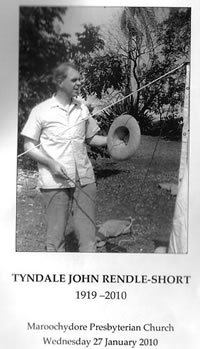 This is the cover of the program handed out at Prof’s funeral last week in Australia.

In many ways, the AiG ministry and our Creation Museum are part of Prof’s legacy! Here is an excerpt from the Sunshine Coast Daily newspaper of Australia on Prof’s death:

His pioneering research into the importance of early childhood autism diagnosis was “remarkable” and praised around the world.

Renowned Professor John Rendle-Short, who retired to Buderim in the late 80s, improved the lives of thousands of families with his passionate dedication to understanding the neuro-biological disorder.

And now his legacy will live on through his great work.

The same year he was appointed Head of Child Health at the University of Queensland, a position he held for the next 24 years. During that time he established the first autism therapy centre in Queensland.

He wrote 18 books and hundreds of papers. His book, A Synopsis of Children’s Diseases, is still being used as a paediatric textbook at the University of Queensland Medical School.

Thus, you can tell that Prof was not only a pioneer in the creation movement, but a pioneer in medicine as well. As Prof passed into the presence of his Savior, I know he would have heard, “Well done, good and faithful servant” (Matthew 25:21).