A Special Day for AiG–UK

It is so encouraging to see the AiG-UK ministry moving forward under the dynamic leadership of my good friend and ministry partner, Dr. Monty White.

As someone who has visited Great Britain almost every year since the early ’90s on speaking tours on behalf of AiG-UK, I want to extend my sincere congratulations to our colleagues there as they settle into their new facilities in Leicester and as they celebrate today’s “open day” (called an “open house” in other countries) for ministry supporters.

It is so encouraging to see the AiG-UK ministry moving forward under the dynamic leadership of my good friend and ministry partner, Dr. Monty White. Because of ministry commitments in the USA, I won’t be able to be a part of today’s festivities. But as I look at photos of this new building, I see it as part of the growth phase of a ministry that the Lord is blessing and expanding. I look forward to seeing the new office when I visit this spring for another UK speaking tour.

Let me give you some of the history that has brought us to this point.

First, I should say that here at the USA headquarters of Answers in Genesis, when new staff come on board, they join a mature ministry, with nice facilities and modern equipment-but what they don’t experience is the sacrificial pioneering work of many whom the Lord has used to get the organization to where it is today.

The same is true in the UK. As supporters and staff walk around the new UK headquarters today, not all of them will be aware of what has gone on before to bring this vital ministry to where it is now.

I remember back over twenty-five years ago when the then-chairman of the board of directors of our creation ministry in Australia, Professor John Rendle-Short (who we all affectionately know as “Prof”) expressed a burden for his homeland of England to also have a vibrant creation ministry reaching out to that culture.

I recall “Prof” speaking of this burden many times. He often visited his homeland, and on occasions he spoke on the creation/evolution issue in various cities. He met a man named Graham Scott, who eventually began what has now become AiG-UK/Europe.

Prof eventually convinced me to tour the UK with him and speak throughout the country. I must admit: this time was a turning point in my life. I had always thought of the UK as a very Christian place-the land of Wesley and Whitfield-the land that gave us Pilgrim’s Progress-the land of the “Prince of Preachers,” Charles Haddon Spurgeon, and so many others.

But when we arrived in the UK, I was, well, shocked! Certainly I saw churches everywhere–but many are increasingly being turned into stores, warehouses … and even mosques. 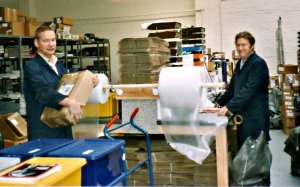 The warehouse at the new AiG-UK office is already in operation. Here is AiG’s Martin Buckingham (left) and David Shepherd.

My own studies had shown that it was in England where the idea of a long age for the earth was really popularized in this modern scientific era. Sadly, many of the church leaders then adopted the idea of millions of years into the Bible, reinterpreting the clear words of Scripture in Genesis. This unlocked a door of compromise. This door has since been widely opened, and has contributed to the devastating collapse of Christianity across the UK.

England, of course, gave us Darwin, who built on the belief of millions of years, and popularized an idea that has spread throughout the world, leaving destruction in its wake. The generations that followed in the UK (and other western nations) have been led to believe the Bible isn’t credible in its history and science-therefore it can’t be trusted in its morality (and also the precious gospel message).

The Lord gave me the same burden for the UK that Prof so earnestly expressed. At this very time, Graham Scott committed to work full-time to see Prof’s vision for a biblical creation ministry that stood on the authority of God’s Word-without compromise-become a reality in the UK.

In the following years, I visited the UK once or twice a year, speaking in churches and other places, as a part of the ministry-building processes. They were hard days-long hours, sleepless nights-and many miles in not-so-comfortable vehicles!

Graham and his family made some great sacrifices. The ministry took over their small rented home. These were what I call “the pioneering days.” The creation ministry in Australia-and later the USA-greatly subsidized the UK ministry in its embryonic beginnings.

My friend Graham has since retired, and handed the ministry reins over to Dr. Monty White.

As we think about this wonderful new facility in its expansion phase of the AiG ministry in the UK, let’s praise the Lord for all He’s done, as, after all, it is His ministry.

Even as we look to the future, let’s never forget the sacrificial pioneering work that has preceded this. Without the dedication of people like Prof. Rendle-Short and Graham Scott (and the many others the Lord used in raising up this ministry), AiG-UK would not now have this new office. This new facility will serve what I truly believe is one of the most vital ministries today-one that is at the cutting edge of the culture war between Christianity and secular humanism.

I know that Prof would also love to be there in the UK today, but age and health preclude that. But I know he will give thanks and praise to the Lord for answering his prayers for the expansion of the creation ministry in his homeland.

I pray the Lord will mightily bless Answers in Genesis-UK/Europe. May this step today be just one small one that will turn into even greater steps, as this unique and greatly needed ministry reaches out to a nation and continent that needs to return to the Word of God.

Congratulations Monty and the staff! And yes-I will keep coming back to the UK to be of whatever assistance I can in helping you in the ministry the Lord has called you to.