Dinosaurs Spotted Along the Nation’s Highways!

In order to maintain its high profile around America and keep hundreds of thousands of guests coming to learn biblical truths each year, the Creation Museum conducts annual advertising campaigns nationwide. One year, the museum purchased considerable airtime on the Fox TV network, including some time during its well-watched news programs in the morning and evening. In another year, Answers in Genesis, the parent ministry of the museum, bought ad space in the national newspaper USA Today for the “I Am Not Ashamed” campaign, which promoted the family-friendly museum. Such advertising efforts have helped bring almost 1.6 million visitors to the evangelistic Creation Museum in five years. 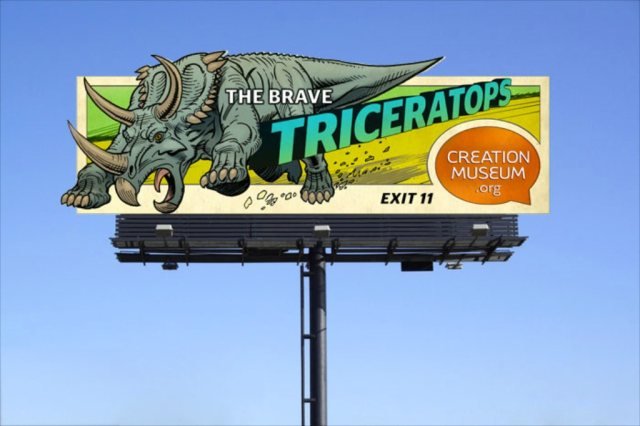 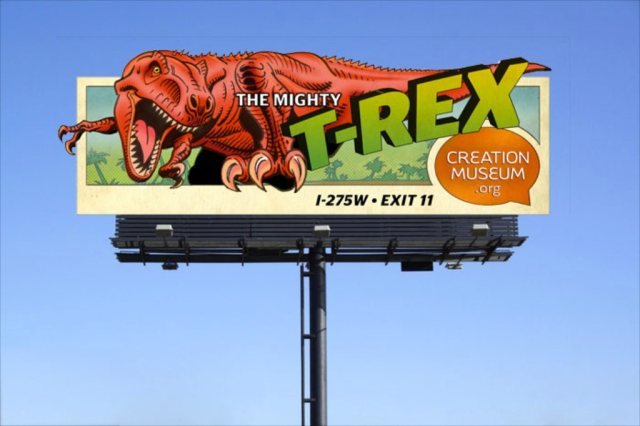 This year, AiG’s creative ad agency, Joseph David Advertising, is continuing the effort to attract people from around America to visit the high-tech museum. JDA has been able to secure space on more than one hundred billboards across America with a striking, unique series of “comic-style” boards. Of the 20 different board styles, most have a dinosaur theme (others include a mastodon or a flying reptile). Although the museum is located near Cincinnati, Ohio (in northern Kentucky), even Californians will see some of these stunning dinosaur boards. Fittingly, a prominent billboard is going up right now near the famed Dinosaur National Monument in Utah, and three billboards will be seen soon near Orlando, Florida, and around its famous vacation spots.

Ken Ham, president of AiG and the Creation Museum, remarked that he hopes these “brilliant billboards will prompt more Christians to visit the museum so we can equip them with answers to defend the Christian faith. We also want these boards to encourage more non-Christians to travel here so that we can challenge them concerning the message of the gospel.”

Over 100 boards have been secured—58 along major interstates that lead toward the museum, and about 50 others that can be found along or entering major interstates and highways. This includes boards located around some mega-churches and amusement park areas, such as Dinosaur World near Tampa, Florida, and Stone Mountain in Atlanta, Georgia. And this is just the beginning of the ad campaign. 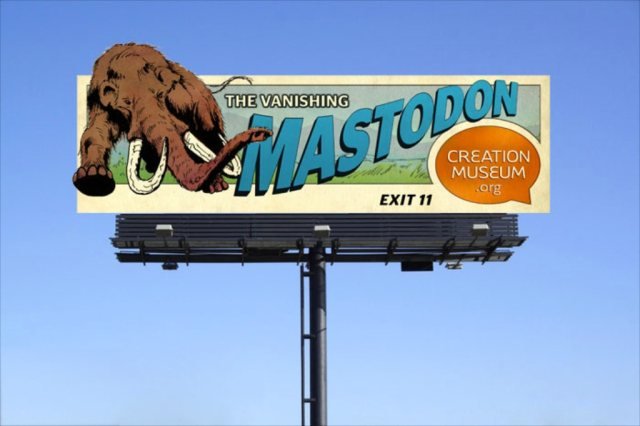 “Our goal,” Ham added, “is to see at least one board per state. Yes, possibly even Hawaii! So far 24 states have posted museum billboards.” To see a list of the 100-plus billboards and figure out if one is near you, go to Ken Ham’s Facebook page.

On this website, we will eventually post a U.S. map that will show where boards are still available for museum boosters to buy (they are typically posted for 90 days). To be a light in your community, you are being asked to please consider sponsoring (perhaps with your church) one of these catchy billboards—maybe one that is close to your church and along a major highway. To sponsor a board, contact us through our website, and we will connect you with our marketing agents at JDA. If you take a photo of one the boards, please submit it to us, along with the exact location of the billboard. You can share the photo and caption on Ken Ham’s Facebook page. 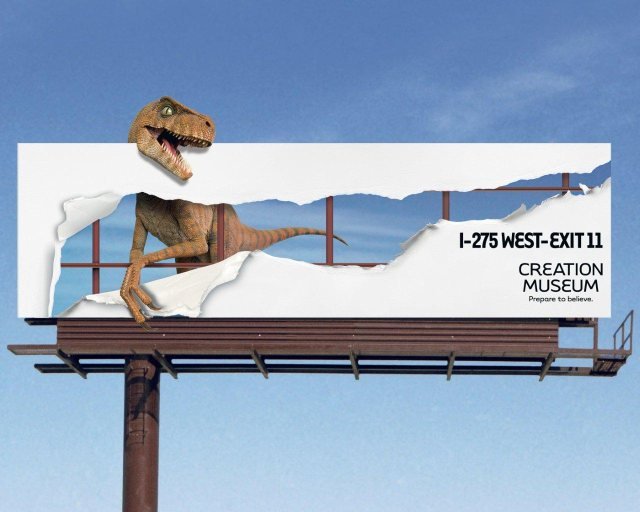 A similar billboard campaign for the Creation Museum was conducted a few years ago, but these boards were mostly posted in the museum’s region. They managed to win the top “Traverse” advertising award in our state (2009) among 200-plus entries. (See a sample of an award-winning 2009 billboard to the right.) Ken Ham blogged about it at the time.

Please pray that these billboards will be used to bring many people to the God-honoring and Bible-upholding Creation Museum. Did you know that almost two thirds of Americans (190 million people) live within a day’s drive of the museum? And besides, having illustrations of dinosaurs associated with the Creation Museum on these billboards is in itself sending a message to the public. Even people living in California will be able to see one of these boards. Then they can go to our website to find out more about our ministry and the creation/gospel message. We hope that one day they will also plan a trip to the Creation Museum; in fact, we have many visitors from California coming to the museum already, and one person in Oregon has come here five times in five years.

With the Creation Museum’s ad campaigns, it’s not surprising that an average of over 800 guests visit the museum each day. In the summer, some Saturdays can see 3,000–4,000 visitors! When you consider that secular museums, zoos, aquariums, etc. can have hundreds of thousands of public school students coming to their attractions each year, and it’s rare for a public school class to visit the Creation Museum, having an average of over 300,000 visitors a year is a major blessing of God.

To read Ken Ham’s perspective on the potential impact of these 100-plus billboards, see his recent blog post about this campaign.