From Portland to Petersburg and Back—Five Times!

When we opened the Creation Museum (just over five years ago now—can you believe it?), I was absolutely amazed that some of our biggest museum donors lived in the west coast, over 2,000 miles from the museum. Some of our largest donations came from California and Washington state. Many of these major donors would tell us that, while the museum wasn’t down the road from them, they saw the importance of it as an evangelistic center for people all over the world. So even though they wouldn’t be able to visit frequently, many west-coasters were still behind the project in a very generous way.

Five years later, I am surprised at how many people have traveled all the way from the west coast to tour the museum. With the case of Laura Zurbrugg from the vicinity of Portland, Oregon, she has visited the museum five times! Her first visit was just before the museum opened, as she took a behind-the-scenes tour. On her latest visit a few weeks ago, she brought her children Collin and Lindsey (see photo of me with them).

I had one of our staff members check how far Laura lives from the museum in Petersburg, and it turned out to be more than 2,350 miles! As you can tell, after 23,500 miles of travel back and forth, Laura is a big fan of the Creation Museum, and she looks forward to her return visits to see what’s new—like our Johnson Observatory with high-power telescopes. Also, next time she can see our new “Lucy” exhibit. 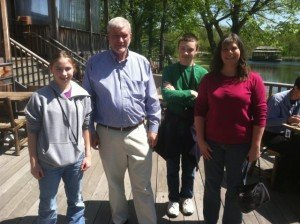 Yes, I have been pleasantly surprised by the number of people living on the west coast who travel all the way here. The number of museum guests from California in particular has been amazing. That helps explain why, as a part of a national advertising campaign for the museum, we are putting up museum billboards many states, including in the West—along freeways in California. Many more people in the West will visit as a result, and we pray that thousands of people will go on the web to find out more about the museum and the AiG ministry after viewing the billboards—and also be exposed to the creation/gospel message. All total, about 100 boards are going up across America right now.

Contact us through this web form to sponsor a Creation Museum billboard in your area, perhaps near your church or along a major highway or interstate. We'll put you in contact with our marketing agents at Joseph David Advertising.

Here are just five of the 20 styles of museum boards we now have. Most of them deal with dinosaurs, which is a fascinating topic for young people (and we have many dinosaur-related exhibits in the museum). 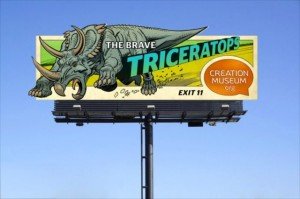 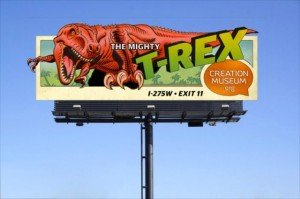 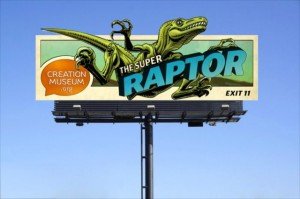 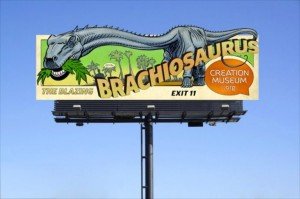 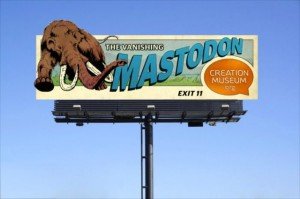 If you have not been to the museum and have seen one of these billboards, maybe it will prompt you to finally visit—wherever you may live in America. Go to www.CreationMuseum.org for more information.