Dedicated to the Lord!

Over 250 people gathered on muddy ground and braved stormy conditions on June 17 to join AiG staff for a ceremony dedicating the site of the future home of AiG’s Creation Museum. 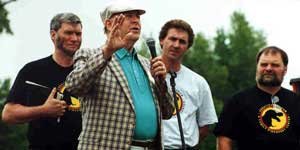 Over 250 people gathered on muddy ground and braved stormy conditions on June 17 to join AiG staff for a warmly received ceremony dedicating the site of the future home of AiG’s Creation Museum and Family Discovery Center, located west of the Greater Cincinnati/Northern Kentucky International Airport.

Joining Ken Ham (AiG executive director) and guests at the land dedication was Dr. John Whitcomb, coauthor of the monumental work The Genesis Flood. In a prayer of dedication, Dr. Whitcomb prayed that the Lord would greatly bless the future museum and AiG headquarters, and added that if the building complex were ever used in a way that would be dishonoring to Him and His Word, that God would remove it from the face of the earth. 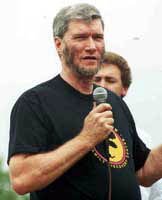 Ken Ham informed the guests that Dr. Whitcomb’s now-classic book The Genesis Flood was “the first major creation book I read.” This was in 1974, and it spurred Ken to start speaking on the book of Genesis, and 2–3 years later to begin what is now known as Answers in Genesis. Ken also mentioned to the crowd that his counterpart at AiG–Australia, Dr. Carl Wieland, a former atheist, became a Christian after reading The Genesis Flood. Dr. Wieland is now the head of Answers in Genesis–Australia, and is the founder and editor of Creation magazine. Ham observed that Answers in Genesis is now the largest creationist network in the world, and noted that its founding was directly tied to Dr. Whitcomb’s book (coauthored by Dr. Henry Morris).

Buddy Davis—who has made six recordings of his creation/gospel songs and is the sculptor of the 60-plus dinosaur models that will be on display in the Creation Museum—played music from his CDs. Buddy told the crowd that he looks forward to the Creation Museum presenting dinosaurs in a biblical framework, as opposed to almost all secular museums that use dinosaurs to promote evolution. The Creation Museum will be a "walk-through" visual history of the world, beginning with the Bible’s very first verse, and will use dinosaur models, interactive displays, videos, and dioramas to proclaim biblical authority.

Representing the AiG board, John Pence shared his perspective on the potential of this national and international outreach. Mr. Pence, an attorney, was deeply involved in the four-year struggle to get zoning approval for the museum land.

After the ceremony, the visitors strolled the scenic 47 acres and fellowshipped with AiG staff and Dr. Whitcomb. A number of the guests commented to Ken how thrilled they were to be a part of this historic event in the life of AiG and its proposed museum.

For more information on the Creation Museum and Family Discovery Center, go to our museum page. If you have a skill or service to provide and would like to join the construction team for the museum, please consider a Gift in Kind donation.

Please pray that we can maintain our construction timetable and have the first phase of the museum open in the summer of 2002, with groundbreaking next March.