Taking the Gospel Around the World

When I began grade nine at high school in Australia, it was mandatory to take a foreign language class for two years. The only language offered at our school was French. I didn’t know anyone who spoke French, so I couldn’t see the point in studying this language. So yes, I had a lack of motivation.

At the end of year ten, my parents, at a parent/teacher night, were told that their son (yes, me!) should not pursue the study of foreign languages! C’est la vie!

I wish I could go back and show my teachers how proficient I am now at foreign languages! I speak a number of them—Australian-English, Canadian-English, American-English, English-English, and so on!

But it is true today that I’m motivated to pursue foreign languages! Very motivated! You see, as a thirteen year old, I hadn’t grasped that in order to carry out the Great Commission to “go into all the world and proclaim the gospel to the whole creation” (Mark 16:15), Christians need to learn many different languages.

We need to proclaim the truth of God’s Word and the gospel to all these groups.

I eventually learned that the event of the Tower of Babel dispersed people and resulted in many different language groups, with subgroups forming within each group. Now, we need to proclaim the truth of God’s Word and the gospel to all these groups.

My parents, who had such an evangelistic heart, understood this need. During my first year of university, I remember Dad becoming a member of the board of an organization called “Japan Evangelistic Band.” And my parents started supporting a missionary who had a burden to reach the people of Japan with the salvation message.

Over the years, as I have travelled across the world giving presentations on the creation/gospel message, I’ve had so many people speak to me, through interpreters, pleading for our books to be made available in their own languages. When I was in France many years ago, I remember thinking, “Hmmm, I wish I had been motivated to learn French when I was at high school!”

My international travels have resulted in meeting people from many different cultures and language groups. These experiences help intensify my burden to get AiG resources into the hands of as many people groups as we can.

We now have quite an intensive translation outreach at AiG. In fact, various AiG publications have been translated into Spanish, French, German, Hebrew, Arabic, Russian, Japanese, Chinese, Italian, Romanian, and many more languages.

AiG is also assisting creation-apologetics ministries in many countries. As well as having offices in the USA, UK/Europe, Canada, and Australia, AiG also supports full-time missionaries in Peru. And we now have a full-time office in Mexico.

Because AiG’s main office is located in the USA, our biggest translation ministry is in Spanish. But what I didn’t realize as we embarked on translating many of our resources into Spanish was the incredible impact this ministry would have on Latin America.

When our speakers began travelling to Latin American countries, we were astonished at the response. Thousands (and sometimes tens of thousands) of people come eagerly to hear the messages—and they “vacuum up” the books and DVDs off the tables! Because so many of these people don’t have the resources to, we greatly subsidize this part of the ministry. But now we are printing AiG resources in Mexico—which makes for a much more efficient use of funds at a considerably reduced cost.

One of the most exciting and startling things is that in Latin America, our speakers are invited into public universities and public schools to speak to professors, teachers, and students. There is so much more freedom to speak on campuses in these countries than in America—and the rest of the once-Christianized West! We now have many such open doors into these countries—so we need to take these opportunities while they are available to us. 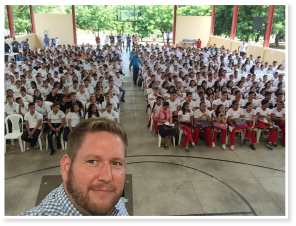 Joe Owen with a group of students in Latin America.

Over time, the Lord brought together a team to head up our Spanish-language ministry at AiG, including Joe Owen. Joe was born in Greenville, South Carolina, where he spent most of his childhood before moving to Northern Kentucky.

At eight years old, Joe heard South American missionaries speak, and God placed a burden in his heart to learn Spanish. In high school, he fell in love with the Spanish language while he and his older brother competed to see who could pick it up the fastest!

During college, Joe fell in love with Maria Elizabeth Montes Rodarte from Zacatecas, Mexico. They married, had six children, and now live in Mexico. When Joe speaks English, he still sounds American. But people tell me that when he speaks Spanish, he doesn’t have an American accent at all! 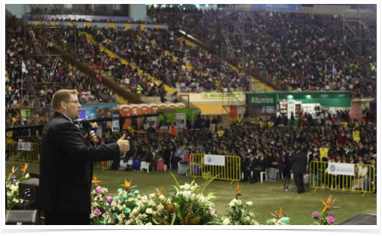 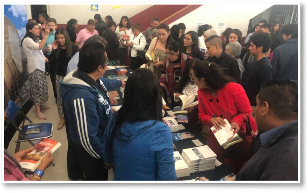 Many of our resources have been translated into Spanish to equip people with the creation/gospel message.

Joe has translated for me many times when I’ve spoken in Spanish-speaking countries like Mexico, the Dominican Republic, and Bolivia. What a gift he is to AiG!

I praise the Lord that Joe has such a burden to reach Latin America while the doors are still wide open to the gospel. So, we agreed before the Lord to send Joe to Mexico to set up an AiG office. He has been traveling and speaking all over Latin America, sometimes in front of massive crowds, and providing AiG resources that are now readily available in Spanish.

While we are distributing resources in several languages, Spanish is by far our biggest translation project. AiG’s Vacation Bible School (VBS) is now available in Spanish, and we are translating our four-year Answers Bible Curriculum into Spanish as well. At the same time, AiG is working with our publisher to make many more of our resources available in various languages.

AiG also has an in-house team of Spanish translators. We often have fun (at my expense) as these staff have come to learn that the only Spanish words I know are burrito, enchilada, taco, and so on! But at least my Spanish is better than my French!

I pray that you will grasp the excitement and magnitude of what God is doing through AiG in Latin America. The best way to help you experience this is to let Joe tell you himself and let him show you photographs and videos that will lift your heart in praise!

Recently, we asked Joe to travel up to the AiG offices to share what is going on through his ministry to Spanish-speaking people. We recorded this on video, and you can watch below.

I can’t find adequate enough words to describe what God is doing in this vital outreach. You have to experience it yourself. I urge you to watch the video, for Joe reports on happenings we never envisaged when we began AiG 25 years ago.

Reaching out to Other Language Groups

Now, we are not only doing our best to take the messages the Lord has laid on our hearts out to language groups around the world. At home, AiG is finding that people from many different language groups are visiting the Ark Encounter and the Creation Museum. Some groups bring their own translators with them. We are also embarking on a long-term project to provide the information found on our exhibit signs (and in our movies) at these attractions into other languages.

We are not only doing our best to take the messages the Lord has laid on our hearts out to language groups around the world.

Recently, I met two men who have a burden to reach Chinese-speaking people. Every month these two men bring groups of Chinese to the Ark Encounter and Creation Museum. Usually, it’s a 50/50 split between Christians and non-Christians. As the leader of this group said to me, “these AiG attractions are the best way to witness to the non-Christians.”

But there’s even more happening. We already have a system through which people can use their smart phone and listen to a description of each exhibit at the Creation Museum (coming soon to the Ark). The leader of the Chinese groups is now translating all this teaching into Chinese so that Chinese-speaking people will be able to hear these descriptions in their own language. We will continue to add other languages over time.

We also hold special Deaf Days at the Ark and Creation Museum with translators who can sign for the hearing impaired. And we are introducing more ways to assist the visually impaired in experiencing our attractions and understanding the teaching in each exhibit.

This month, I’m praying that you will catch AiG’s vision to reach as many language groups as we can around the world. Doing this requires much prayer and financial support. We want to reach as many souls as we can with the creation and the gospel message.

And if you want to really be uplifted, please watch the video. I’ve no doubt you’ll be amazed and excited to see what God is doing. I wouldn’t be surprised if you shed tears of joy as you see this mighty work of God.

So I wasn’t motivated to learn French 50+ years ago, but the Lord eventually motivated me to proclaim the truth of his Word and the gospel in many languages—to millions of people! I wish I could go back and let my teacher know that this is the best motivation one could ever have in learning a foreign language!

Previous Article Answering Atheists: The Competing Conference Next Article Where Are the Coming Generations Headed?