A Flood of Excitement!

Fifty-five years after the publication of the classic book The Genesis Flood—which really started the modern biblical creation movement—a full-size Noah’s Ark is projected to open in the summer of 2016 here in northern Kentucky.

In hindsight, we can certainly see how God used their book to spawn a creation movement that has spread around the world.

When the book’s authors, the late Dr. Henry Morris and Dr. John Whitcomb (who turns 90 this month), published their book in 1961, I doubt they could have ever foreseen what would result.

Now, there were scoffers back then (as there are today), including from inside the church, who did not see the importance of such a book. For many Christians then (and now), they declared that it was only important to preach the message of salvation in Jesus, and not even write a book about the Genesis Flood.

Drs. Morris and Whitcomb, however, understood something vital that many Christians still miss today. The message of salvation through Jesus comes from a Book: the Bible, the very Word of God. Back in the ’60s (and today), the teaching of evolution and millions of years resulted in generations of people not trusting the Book. Now, if this Book can’t be believed regarding its history, then how can it be trusted for its message of salvation—which is based in that history?

As they wrote their book, Drs. Morris and Whitcomb understood there was a major issue in the church and culture: authority. Is God’s Word the absolute authority in matters related to origins, or should man’s fallible words be used to reinterpret (and ultimately undermine) Genesis, and thus the authority of God’s Word?

The Genesis Flood laid the foundation for a new reformation: to call the church (and culture) back to believing the Bible’s authority. In hindsight, we can certainly see how God used their book to spawn a creation movement that has spread around the world.

For twenty years, I’ve often said that the ministry of Answers in Genesis (and the Creation Museum) is one of reformation: to call the church and culture back to the authority of the Word of God.

Having Dr. Whitcomb at our peg-pounding ceremony reminded me of Martin Luther hammering his theses on a wooden church door.

Last month, a special event we called our “Hammer and Peg” ceremony was held at Legacy Hall inside the Creation Museum. AiG staff, board, and other officials used wooden mallets to hammer wooden pegs into big wooden beams (which were cut from the trees on the land where our full-size Noah’s Ark will be built). The ceremony signified the launch of the Ark Encounter themed attraction.

Having Dr. Whitcomb hammer his peg into a beam at our ceremony reminded me of Martin Luther almost 500 years ago, when Luther hammered his theses into the wooden door of a German church and proclaimed biblical authority . It started the Reformation.

As the wooden pegs were hammered into our beams on May 1, I saw the event as part of a continuing reformation to restore biblical authority that started in 1961. It is the same kind of reformation that is much needed today, for so much of the church has compromised God’s Word in Genesis and has thus undermined the authority of all His Word, including the gospel message itself! With this loss of biblical authority, generations have been leaving the church. The church is no longer affecting the culture as it once did; instead, the culture and the ideas of secularists have infected the church.

Last month, Dr. Whitcomb gave a succinct but powerful message on biblical authority, and he also presented the gospel. I was honored to be standing next to him as he sat in his wheel chair and knocked his peg into the beam. 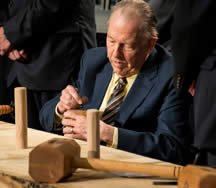 Dr. Whitcomb autographed a hammer after the May ceremony.

As Dr. Whitcomb hammered in his peg, I saw it as highly symbolic. Just as Luther’s nailing of his theses on the church door, the publication of Dr. Whitcomb’s The Genesis Flood was symbolic of nailing a thesis on the door of today’s church. His book was used as a major tool to get the church back to the authority of the Bible, so that the gospel could be more powerfully and effectively presented to the world.

Be a part of this ongoing reformation that is spreading as God blesses, even with the rampant unbelief and compromise in the church concerning Genesis. The Ark Encounter is a key to this reformation, as I believe God will use it to help bring about salvation and personal revival in millions! Please pray that the life-size Ark and all its exhibits will be completed in the next two years.